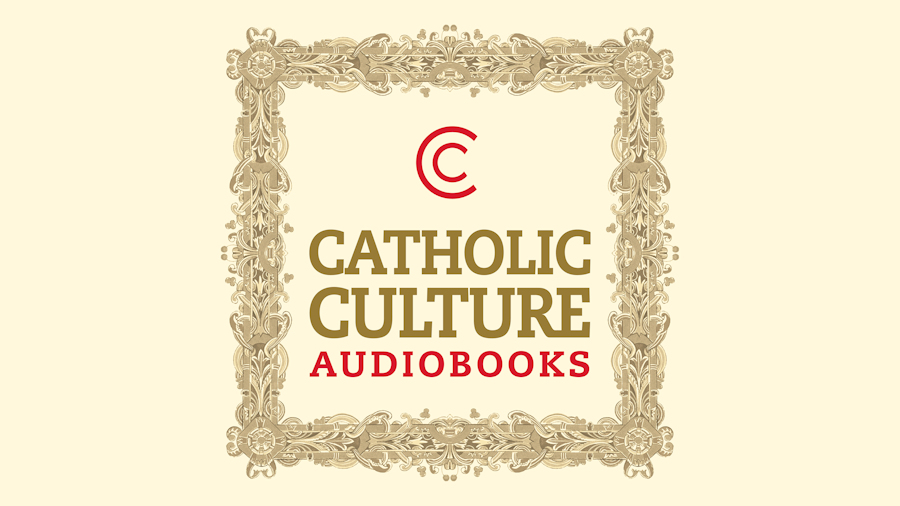 Voice actor James T. Majewski brings to life classic Catholic works, with a special emphasis on St. John Henry Newman and the Fathers of the Church.

See the complete list of authors and titles covered so far.

Listen to this podcast on: Apple Podcasts | Google Podcasts

Episodes in this podcast beyond the most recent 15 are limited to Catholic Culture subscribers only. Log in or subscribe now (free) to get all the episodes!

St. Cyprian of Carthage—Letter to Donatus

“While I was lying in darkness and in the obscure night, and while, ignorant of my real life, I was tossing about on the sea of a restless world wavering and doubtful in my wandering steps… I thought it indeed difficult and hard to believe... that divine mercy was promised for my salvation.”

"Deviant sexual assault has accomplished what liturgical abuse never could: it has generated secular media pressure and secular legal constraints so overwhelming that the apparat was forced to make its files public."

One of the most influential works in the history of Christian literature, read in its entirety by voice-actor James T. Majewski.

“Everyone devoted to the study of the Holy Scriptures... will find nothing else except that God must be loved for His own sake, and our neighbor for the sake of God.”

St. John Henry Newman—On the Fitness of the Glories of Mary

“Her glories are not only for the sake of her Son — they are for our sakes also.”

“All the aspirations which the prayer of other religions expresses are fulfilled in the reality of Christianity beyond all measure.”

Origen of Alexandria—Homily I on Genesis

“In accordance with the view of the apostle Paul, let us give attention to the text - that we can, as he himself says, receive ‘the mind of Christ’ and know ‘the things that are given us by God.’”

From the Archive: The Akathist Hymn

July 24, 2020 is being observed by the Greek Orthodox Archdiocese of America as a day of mourning for Hagia Sophia.

“Whoever, then, appears in his own opinion to have comprehended the Sacred Scriptures, or even some part of them, yet does not build up with that knowledge the two-fold love of God and his neighbor, has not yet known as he ought to know.”

“It is beautiful in a picture to wash the disciples' feet; but the sands of the real desert have no lustre in them to compensate for the servile nature of the occupation.”

"But the fight for our planet, physical and spiritual, a fight of cosmic proportions, is not a vague matter of the future; it has already started."

“Mistrust Him, Meg, I will not, even if I feel myself faint."

“Because of something uncertain, there should not be a definite abandonment of duty — for, in that event, there is certain ruin for the people, not only in things pertaining to this life, but also in those of that other life which must be cared for with incomparably greater attention and anxiety.”

"The man who thinks that he is quiet and peaceful has within him a passion that he does not see. "

St. Thomas Aquinas—Send Out Your Spirit

Let the working man and the employer make free agreements, and in particular let them agree freely as to the wages; nevertheless, there underlies a dictate of natural justice more imperious and ancient than any bargain between man and man, namely, that wages ought not to be insufficient to support a frugal and well-behaved wage-earner.

Hence, it is clear that the main tenet of socialism — community of goods — must be utterly rejected, since it only injures those whom it would seem meant to benefit, is directly contrary to the natural rights of mankind, and would introduce confusion and disorder into the commonweal.

St. Cyril of Jerusalem—Mystagogical Lectures on the Eucharist

“When the Master himself has explicitly said of the bread, ‘This is my body,’ will anyone still dare to doubt? When He is Himself our warranty, saying, “This is my blood,” who will ever waver and say it is not His Blood?”

“Do not lose heart, children, for as the Lord has been angry, so will He heal again and the Church shall quickly recover her own good order and shall shine as she has shone.”

Raïssa Maritain—We Have Been Friends Together (excerpt)

"I would have accepted a sad life, but not one that was absurd."

“None rejoice in Easter-tide less than those who have not grieved in Lent.”

St. John Henry Newman—Mental Sufferings of Our Lord in His Passion

St. John Henry Newman—The Cross of Christ the Measure of the World

“What is given us by revelation to estimate and measure this world by? The event of this season—the Crucifixion of the Son of God.”

“Would you know the power of repentance? Would you understand this strong weapon of salvation and the might of confession?”

St. Cyril of Jerusalem—Catechesis I

"Sustain the struggle for your soul, especially in these days!”

“For when did the knowledge of God so shine forth? When did chastity and the virtue of virginity so manifest itself, or when was death so despised, as since the Cross of Christ appeared?”

"Perhaps this is the truest view of such exercises, that in some wonderful, unknown way they open the next world for good and evil upon us..."

“Do you hate your brother and walk about free from care? Are you unwilling to be reconciled, although God is giving you an opportunity for that purpose? Behold, you are a murderer and yet you live.”

“I am a servant of Christ. If you have been sent against me, here I am.”

"Not where I breathe, but where I love, I live."

“I will prove to you, here and now, that we do not believe in groundless myths nor in teachings not based on reason, but in doctrines that are inspired by the Divine Spirit, abundant with power, and teeming with grace.”

“It is possible, with the help of God, easily to distinguish the presence of the good and the bad: a vision of the holy ones is not agitated.”

“Do not be fearful when you hear of perfection, nor be surprised at the word, for it is not far from us… the Lord has already told us: the kingdom of God is within you.”

In this special episode in honor of the annual March for Life, we’ve compiled a selection of three of Newman’s poems, all composed within a few days of one another and all reflecting on the efficacy of prayer.

“Do not hesitate to believe what you have heard from those who have brought you accounts of him; believe, rather, that they have told but little... for it is probable that, when each one has told what he knows, the account will not do Anthony justice.”

“... if any of these customs is common to the whole Church throughout the world, it is the most unheard of madness to doubt that such custom is to be followed.”

“We are now entering on a fresh stage of our life's journey; we know well how it will end, and we see where we shall stop in the evening, though we do not see the road.”

"If at any time we might love the world, it is now. If at any time, it is when He is come to be our Emmanuel."

"This faith, if only you desire it, you can have."

"And let us not merely seem to pay attention and to believe now, while being admonished by the presbyters, but also, when we have gone home, let us remember the commandments of the Lord..."

St. John Henry Newman—The Glories of Mary for the Sake of Her Son

“It was fitting, for His honor and glory, that she, who was the instrument of His bodily presence, should first be a miracle of His grace.”

"The season is chill and dark, and the breath of the morning is damp, and worshipers are few, but all this befits those who are by profession penitents and mourners, watchers and pilgrims."

St. Ignatius of Antioch—Letter to the Smyrnaeans

"Wherever the bishop appears, there let the people be; as wherever Jesus Christ is, there is the Catholic Church."

"In heaven, love will absorb fear; but in this world, fear and love must go together."

"But, if some shall disobey the words which have been spoken by Him through us, let them know that they will involve themselves in no small transgression and danger."

“The unseen God alone was their Comforter, and this invests the scene of their suffering with supernatural majesty, and awes us when we think of them.”

The Martyrdom of St. Polycarp

"The uproar in the stadium was such that nobody could be heard at all."

St. Polycarp—Letter to the Philippians

"The letter of Ignatius sent to us by himself and all the others we have here we send you... and from them you will greatly profit."

St. Ignatius of Antioch—Letter to Polycarp

"Copy the ways of God in speaking to each as an individual person... Not every wound is healed by the same salve."

"We crowd these all up into one day; we mingle together in the brief remembrance of an hour all the choicest deeds, the holiest lives, the noblest labors, the most precious sufferings, which the sun ever saw."

The Didache: Teaching of the Twelve Apostles

"Do not abandon the commandments of the Lord, but keep what you have received, without adding or subtracting."

"God has created me to do Him some definite service; He has committed some work to me which He has not committed to another."

"Artists are constantly in search of the hidden meaning of things, and their torment is to succeed in expressing the world of the ineffable. How then can we fail to see what a great source of inspiration is offered by that kind of homeland of the soul that is religion?"

St. Ignatius of Antioch—Letter to the Romans

"I am God's wheat; I am ground by the teeth of the wild beasts that I may end as the pure bread of Christ."

St. John Henry Newman—The Salvation of the Hearer the Motive of the Preacher

Happy feast of Blessed John Henry Newman! Today it is fitting to drop the trailer for one of CatholicCulture.org’s new podcast series, which will take Newman for its patron. Every week, Catholic Culture Audiobooks will be bringing you...