Solemnity of the Blessed Virgin Mary, the Mother of God, The Octave Day of Christmas

Other Titles: New Year’s Day; Octave of the Nativity of the Lord; Circumcision of Our Lord 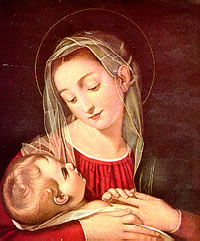 Solemnity of the BVM, Mother of God: O God, who through the fruitful virginity of Blessed Mary bestowed on the human race the grace of eternal salvation, grant, we pray, that we may experience the intercession of her, through whom we were found worthy to receive the author of life, our Lord Jesus Christ, your Son. Who lives and reigns with you in the unity of the Holy Spirit, God, for ever and ever.

Mass Propers for the Octave Day of Christmas, Solemnity of the Blessed Virgin Mary, the Mother of God, Entrance Antiphon:

Hail, Holy Mother, who gave birth to the King who rules heaven and earth for ever.

In the past God spoke to our ancestors through the prophets; in these last days, he has spoken to us through the Son.

It is truly right and just, our duty and our salvation,
always and everywhere to give you thanks,
Lord, holy Father, almighty and eternal God,
and to praise, bless, and glorify your name
on the Solemnity of the Motherhood of the Blessed ever-Virgin Mary.

For by the overshadowing of the Holy Spirit
she conceived your Only Begotten Son,
and without losing the glory of virginity,
brought forth into the world the eternal Light,
Jesus Christ our Lord.Through him the Angels praise your majesty,
Dominions adore and Powers tremble before you.
Heaven and the Virtues of heaven and the blessed Seraphim
worship together with exultation.
May our voices, we pray, join with theirs
in humble praise, as we acclaim:

Jesus Christ is the same yesterday, today, and for ever.

Today the Church celebrates the Solemnity of Mary, the Holy Mother of God, our Lady's greatest title. This feast is the Octave Day of Christmas. In the current liturgical Calendar only Christmas and Easter enjoy the privilege of an octave.

It is also the World Day of Peace."Mary, the all-holy ever-virgin Mother of God, is the masterwork of the mission of the Son and the Spirit in the fullness of time. For the first time in the plan of salvation and because his Spirit had prepared her, the Father found the dwelling place where his Son and his Spirit could dwell among men. In this sense the Church's Tradition has often read the most beautiful texts on wisdom in relation to Mary. Mary is acclaimed and represented in the liturgy as the "Seat of Wisdom."
—Catechism of the Catholic Church 721A plenary indulgence may be gained by reciting or singing the hymn Veni Creator Spiritus on the first day of the year. This hymn is traditionally sung for beginnings of things, calling on the Holy Spirit before endeavoring something new.

The Word Took Our Nature from Mary
The Apostle tells us: The Word took to himself the sons of Abraham, and so had to be like his brothers in all things. He had then to take a body like ours. This explains the fact of Mary’s presence: she is to provide him with a body of his own, to be offered for our sake. Scripture records her giving birth, and says: She wrapped him in swaddling clothes. Her breasts, which fed him, were called blessed. Sacrifice was offered because the child was her firstborn. Gabriel used careful and prudent language when he announced his birth. He did not speak of “what will be born in you” to avoid the impression that a body would be introduced into her womb from outside; he spoke of “what will be born from you” so that we might know by faith that her child originated within her and from her.By taking our nature and offering it in sacrifice, the Word was to destroy it completely and then invest it with his own nature, and so prompt the Apostle to say: This corruptible body must put on incorruption; this mortal body must put on immortality. 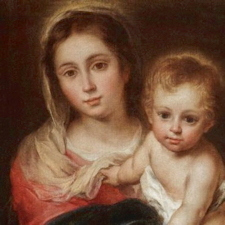 This was not done in outward show only, as some have imagined. This is not so. Our Savior truly became man, and from this has followed the salvation of man as a whole. Our salvation is in no way fictitious, nor does it apply only to the body. The salvation of the whole man, that is, of soul and body, has really been achieved in the Word himself.What was born of Mary was therefore human by nature, in accordance with the inspired Scriptures, and the body of the Lord was a true body: It was a true body because it was the same as ours. Mary, you see, is our sister, for we are all born from Adam.The words of Saint John: The Word was made flesh, bear the same meaning, as we may see from a similar turn of phrase in Saint Paul: Christ was made a curse for our sake. Man’s body has acquired something great through its communion and union with the Word. From being mortal it has been made immortal; though it was a living body it has become a spiritual one; though it was made from the earth it has passed through the gates of heaven.Even when the Word takes a body from Mary, the Trinity remains a Trinity, with neither increase nor decrease. It is for ever perfect. In the Trinity we acknowledge one Godhead, and thus one God, the Father of the Word, is proclaimed in the Church. —Excerpted from a letter by St. Athanasius

Mass Readings for the Octave Day of Christmas: Solemnity of Mary, Mother of God:
The First Reading is taken from the Book of Numbers 6:22-27. After the Exodus (or coming out of Egypt) and after God had made a covenant on Mount Sinai with the Chosen People, Moses, on God's instructions, set the tribe of Levi apart so that they would offer the sacrifices and carry out the liturgy in the name of, and for, the rest of the tribes. The direct line of Aaron, head of the tribe of Levi, were to be the priests who would have the principal part in the offering of the sacrifices and in the other liturgical acts. One of the liturgical acts of the priests was to bless the people after the daily sacrifices and on other solemn occasions. The blessing was a reward for the keeping of the covenant by the people, and a guarantee that the blessing promised to all nations through Abraham would be fulfilled one day. The words of the blessing given by God to Moses are recorded in these verses of the book of Number read at today's Mass.The Second Reading is taken from the Letter of St. Paul to the Galatians 4:4-7. The Galatians—pagans recently converted to Christianity by Paul—were being disturbed in their faith by Judaizers, that is, by Jews who pretended to be Christians but were not. These were telling the new converts that Christianity was not something really new, but only a new form of Judaism, and therefore the converts must accept circumcision and other practices of the old law. Paul in his letter reacts strongly to this falsehood. Christianity is not a reform of Judaism, he states, but is its replacement. Judaism was only a preparation, Christianity is the fulfillment; the old law was but a shadow of things to come, Christianity is the reality.The "fullness of time has come," the period of permeation and promise has ended. Men are no longer slaves of the law or slaves of their past pagan polytheism and its practices. They are now free men and new men, sons of God. They can now truly call God "Abba Father" "for God sent his Son born of a woman." The Incarnation has taken place, men are no longer mere human beings, they have a new life given them in Baptism. They now share in the divine life because Christ has shared their human life with them.The Gospel of today's feast is from the Gospel of Luke 2:21. This story of the humble shepherds of Bethlehem coming to find Jesus "in the manger wrapped in swaddling clothe" already read at the Dawn Mass on Christmas Day, is repeated today because of the feast we are celebrating, the Divine Motherhood of Mary. It is the feast of Christmas again, the feast of the Incarnation and birth of our Savior, but it is Mary's part in this wonderful mystery of God's love for men that the Church is stressing today. —Adapted from The Sunday Readings by Keven O'Sullivan, O.F.M.

Solemnity of Mary, the Holy Mother of God, Octave Day of Christmas—Day Eight

Although New Year's Day is not celebrated by the Church, this day has been observed as a Holy Day of Obligation since early times for this feast. Each family and country has different traditional foods to eat on New Year's Day, with lentils being the main superstition: ill luck befalling those who do not eat lentils at the beginning of the year.

January 1, Solemnity of the Blessed Virgin Mary, the Mother of God, The Octave Day of Christmas
Station with Santa Maria in Trastevere (St. Mary Across the Tiber):
The station is at St. Mary's across the Tiber, one of the most interesting churches in Rome, full of relics of the fifth, seventh, and eighth centuries, and of the Middle Ages, and further associated with the memory of St. Callistus (third century). After St. Mary Major's, it is considered the most beautiful of the churches consecrated to Our Lady in Rome. It is fitting that the Mass be celebrated in this church, for the feast is really the Octave of Christmas, dedicated to Mary.
For Further Info, see:
Churches of Rome Info
Rome Art Lover
Roman Churches