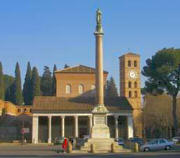 In older missals, each day in Lent and other feasts refer to a "Station" in some church of Rome. Although this practice is not highlighted in our present missals, the Church still honors this tradition of Stational Churches, particularly during the Lenten season (see the Vatican website for the list of the stational churches for Lent and the Pontifical North American College section on the Station Churches of Rome).

History of the Station

Stational or station churches are churches in Rome designated to be the special location for worship on a particular day. This practice dates back to the early centuries of the Church. The Pope (or his legate) would celebrate solemn Mass in one after another of the four greater and the three minor basilicas during the 4th and 5th centuries (the seven churches or Sette Chiese — St. John Lateran, St. Peter, St. Paul Outside the Walls, St. Mary Major, the Holy Cross in Jerusalem, St. Lawrence, and the Twelve Apostles). Other churches were added to list as needed for various liturgical occasions, bringing the total number of churches to 45, with the last two (Santa Agatha and Santa Maria Nuova, called Santa Franciscan Romana) added by Pope Pius XI on March 5, 1934. When the popes started residing in Avignon, France in 1305, the popularity of this devotion declined until recently.

On the day of the station, the faithful would gather in one church (church of the collecta or gathering) and in procession singing the Litany of the Saints or psalms, they would go to the church where the Mass was to be celebrated: there they met the Pope and his clergy, coming in state from his Patriarchal Palace of the Lateran. This was called "making the station." Such a Mass was a "conventual mass" (or community Mass) of the City and the world, Urbi et Orbi (the visible congregation in Rome and the invisible audience of the entire world). This old custom reminds us that Rome is the center of Christian worship, from which we received our faith and our liturgy.

Present Practice of the Stational Church

There is not always a Papal Mass in the stational church, but the stational procession and Mass have been restored at Rome, especially in Lent when each day has its proper Station and Mass. On Ash Wednesday the station at Santa Sabina Church is the most important of all, because the Pope still gathers there and distributes ashes to the people. In the 1968 Enchiridion of Indulgences states "[a] partial indulgence is granted to the faithful, who on the day indicated in the Roman Missal devoutly visit the Stational Church of Rome (Stationalium Ecclesiarum Urbis visitatio) named for that day; but if they also assist at the sacred functions celebrated in the morning or evening, a plenary indulgence is granted."

There are 89 stations of the year (all of Lent, Ember Days, Sundays of Advent, Easter Octave, and several great feasts), on Christmas, three, and on Easter, two "stational Masses" are mentioned, bringing the number of these stations to 89. Most of the stations are named after saints. In gathering for the Mass, the saint was so vividly in the minds of the people, that the saint seemed present among them. This explains why the missal states "Statio ad sanctum Paulum." The service is, as Pius Parsch states:

...not merely in the church of St. Paul, but rather in his very presence. In the stational liturgy, then, St. Paul was considered as actually present and acting in his capacity as head and pattern for the liturgical worshipers. Yes, even more, the assembled congregation entered into a mystical union with the saint by sharing in his glory and by seeing him beforehand the Lord's advent in the Mass (The Church's Year of Grace, Volume 2, p. 72).

The processing from church to church demonstrates our earthly pilgrimage to our eternal home. This universal Christian practice also reminds of our Roman heritage, and helps us pray as one body, encouraging and praying for one another, worshipping together as a universal community. Let us use this old custom for "interior transformation and transmutation through the Lenten Eucharist under the leadership of our stational saint in holy fellowship." (M. Hellriegel).