Action Alert!
CLOSING IN: 13 days left and only $26,723 away from winning a $60K Challenge Grant! We are over halfway there—please help now! 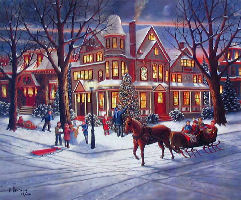 The Grailville publication, New Life for New Year's Eve, contains several good suggestions both for adults and for children. The theme chosen as motif for the evening is that of the bells. It is suggested that bells as a symbol of the gathering of Christians be used upon the invitation cards, that bell cookies and cakes be served, and that the bell be rung gloriously at midnight, especially in the event that there is a midnight Mass in the parish.

Bells have always been connected with New Year's, and are pictured on our greeting cards, but we've pretty much forgotten what bells signify. The meaning of the bell reaches far back in human history. The bells have called Christians of many ages to pray, to rejoice, to mourn, as one. They summon us to Mass, announce marriages, toll deaths, ring out the feasts. Thus the theme of the bells can bring to mind the Christian life which we share in common. The bells serve as a beautiful symbol introducing a new year to be spent together as a community of families or a group working in the lay apostolate.

Bells indeed are the traditional means of calling the Christian community to prayer. Even at home bells should be readily associated with the Angelus and the familiar call to Sunday Mass. Children love to ring bells just as they are fond of lighting candles and playing with matches. Each child should have his turn at ringing the Angelus at home, preferably at the same time that it is rung at church. On New Year's Eve, the whole family could participate in ringing bells as they sing the "Gloria in Excelsis Deo," the "Te Deum," or one of the psalms of praise. A little extra glamour is added by playing a good recording of cathedral bells.

Before using an object it is excellent pedagogy to instruct the child concerning the meaning and symbolism of the object. Since bells and candles, wassail and the yule log are seen so very often upon Christmas greetings and New Year's cards, the children should be taught what they mean. In this country, New Year is replete with old English tradition. The decking of the halls and the lighting of holiday candles should be associated with the Christmas wreath and the Advent candles. The yule log, an old custom connected with the winter solstice, when the time of light is shortest, is a pagan custom which may be Christianized. Gathering around a fire denotes unity, and the lighting of the fire and candles signifies the dispelling of darkness when the Light came into the world at Christmas. The Grailville booklet wisely suggests that the yule log be blessed by a prayer adapted from the first Mass of Christmas day. After the children carry the log or large Christmas candle into the room, the father explains its meaning and lights it saying,

O God, who hast made this most holy season to shine forth with the brightness of the true Light, grant, we beseech Thee, that we who have known the mystery of His light upon earth may attain the enjoyment of His happiness in heaven. Who with Thee liveth and reigneth in the unity of the Holy Spirit, God, world without end. Amen.

As light and fire symbolize the coming of the Redeemer and the unity of all men in Christ, so the wassail bowl is associated with the charity of St. John. The ringing of bells and singing of Christmas songs echo the purity of heart which is the cause of rejoicing for the family. New Year's Eve is an excellent day to explain to the children the meaning of the blessing of church bells. The booklet published by the Newman Press could be reviewed, quoted, and its content explained. Songs such as "Deck the Hall," the "Wassail Song," "The Holly and the Ivy," and the "Coventry Carol" are in season, as well as poems such as "Ring out, Wild Bells," sections of Tennyson's "In Memoriam," and "The Bells" by Poe.

Hospitality is a hallmark of the evening. Christmas spirit should embrace the aged, the stranger, the poor and the lonely. None should be excluded from the family festivities on New Year's Eve. The Chinese, who are particularly devoted to elderly members of the family, could be imitated in their respect and deference to the aged. Family spirit during this season shows love and kindness to the patriarchs and matriarchs of the family.

A serious note is added to the evening by an "Hour of Watching." The prayer hour should be carefully timed so that it reaches a climax at midnight. There is no better way to conclude the closing of the civil year and the opening of the New Year than by family prayer followed by midnight Mass. There should be contrition and thanksgiving for the past, and a prayer of peace and holiness during the oncoming year. The easiest way to conceive this midnight service of the New Year liturgically is to compare it with the Ember Days. We recall that Ember Wednesdays are consecrated to our Blessed Mother, Ember Fridays are days of penance and prayer for the past, and Ember Saturdays are days of thanksgiving and renewal concluding with a vigil service which leads into the Sunday. The New Year hour of prayer should contain practically the same themes, concluding with the ringing of the bells and assistance at midnight Mass. Further treatment of this material may be found in Deo Gratias by M. B. Hellriegel.

Today and on the Feast of the Holy Name, which is but a complement to the feast of the Circumcision (the Gospel is indeed the same), the name of the Saviour should be explained to the children. During Advent Isaias called the Messias Emmanuel, but this is not to be taken as a personal or proper name but rather as a symbolic name meaning "God with us." St. Paul always called Him the Christ-Jesus. The word "Christ" was not originally a proper name, but always designated Our Lord in virtue of His ministry as the Anointed One, the Redeemer. The name "Jesus" is His own personal name, which is preferred today by modern piety even though the "Christ-Jesus" of St. Paul is preferred by the objective piety of the liturgy. When we speak of "Christ" we think of the divine High Priest who renews His sacrifice upon the altar, or the divine King seated upon the throne of God, who shall come to judge the living and the dead. The proper name of the Lord, Jesus, refers more to the human side of Christ insofar as He was the God-Man who lived and died for us, who is the Good Shepherd leading our souls to heaven. It is because the name "Jesus" is proper to the God-Man that an inclination of the head is prescribed at that name rather than at the title of Christ.

At the name of Jesus all who are in heaven, on earth or in hell must bow; and all tongues must confess that our Lord Jesus-Christ is in the glory of the Father. (Introit of the Feast of the Holy Name).

This is the only name by which salvation shall be attained.

Beside caroling and family festivity on these feast days of Mary and Jesus, a little guessing game may interest the children. About our various parish churches there are some mysterious signs whose meaning could be guessed.

What is the meaning of the Chi-Rho, the IHC and the IHS?

Why should the fish be a symbol of Christ?

What is the Majestas Domini?

The Christmas tree recalls the meaning of PHOS and ZOE, which form a monogram in the form of a cross. The proper song for the day is naturally the simple little Vesper hymn of the Holy Name: Jesus, the very Thought of Thee (Jesu Dulcis Memoria).

What happened to the decoration of the Scripture Cake? Well, of course, it must be decorated with one of the monograms of the name of Jesus. Perhaps it could even be shaped as a fish-mold with the ICTHUS written in red icing: Jesus-Christ, the Son of God, the Savior.