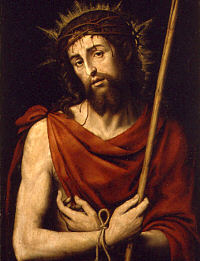 Lord, protect us in our struggle against evil. As we begin the discipline of Lent, make this day holy by our self-denial. Grant this through our Lord Jesus Christ, your Son, who lives and reigns with you and the Holy Spirit, God, for ever and ever. Amen.

Abstinence from eating meat is to be observed on all Fridays during Lent. This applies to all persons 14 and older. The law of fasting on Ash Wednesday and Good Friday applies to all Catholics from age 18 through age 59.

Stational churches are the churches that are appointed for special morning and evening services during Lent, Easter and some other important days. The tradition started in order to strengthen the sense of community within the Church in Rome, as this system meant that the Holy Father would visit each part of the city and celebrate Mass with the congregation.

The first stational church during Lent is St. Sabina at the Aventine. It was built in the 5th century, presumably at the site of the original Titulus Sabinae, a church in the home of Sabina who had been martyred c. 114. The tituli were the first parish churches in Rome. St Dominic lived in the adjacent monastery for a period soon before his death in 1221. Among other residents of the monastery were St Thomas Aquinas. 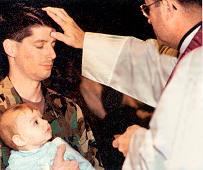 At the beginning of Lent, on Ash Wednesday, ashes are blessed during Mass, after the homily. The blessed ashes are then "imposed" on the faithful as a sign of conversion, penance, fasting and human mortality. The ashes are blessed at least during the first Mass of the day, but they may also be imposed during all the Masses of the day, after the homily, and even outside the time of Mass to meet the needs of the faithful. Priests or deacons normally impart this sacramental, but instituted acolytes, other extraordinary ministers or designated lay people may be delegated to impart ashes, if the bishop judges that this is necessary. The ashes are made from the palms used at the previous Passion Sunday ceremonies.
—Ceremonies of the Liturgical Year, Msgr. Peter J. Elliott

The act of putting on ashes symbolizes fragility and mortality, and the need to be redeemed by the mercy of God. Far from being a merely external act, the Church has retained the use of ashes to symbolize that attitude of internal penance to which all the baptized are called during Lent.
—Directory on Popular Piety and the Liturgy

Meditation—An Itinerary of Conversion
The rediscovery of the baptismal character of Lent, the ancient penitential season that precedes Easter, and the restoration of the Paschal Triduum—Holy Thursday, Good Friday, and the Easter Vigil—as the apex of the Church’s liturgical year are two of the most important accomplishments of modern Catholicism.

Over the centuries, the summit of the Church’s year of grace—the celebration of Christ’s passing over from death to life, for which the Church prepares in Lent—had become encrusted with liturgical barnacles that gradually took center stage in the drama of Holy Week. And while some of them had a beauty of their own, such as the Tenebrae service, celebrated early in the morning of Holy Thursday, Good Friday, and Holy Saturday, the overall effect was to diminish the liturgical richness of the Triduum; the Easter Vigil’s essential character as a dramatic night-watch, when the Church gathers at the Lord’s tomb to ponder the great events of salvation history while awaiting the bright dawn of the Resurrection, was almost completely obscured. Similarly, Lent, which had an intensely baptismal character centuries ago, became almost exclusively penitential: a matter of what Catholics must not do, rather than a season focused on the heart of the Christian vocation and mission—conversion to Jesus Christ and the deepening of our friendship with him.Now, thanks to Pope Pius XII’s restoration of the Easter Vigil and the liturgical reforms mandated by the Second Vatican Council, Catholics of the twenty-first century can celebrate both Lent and the Paschal Triduum in the richness of their evangelical and baptismal character, as moments of intensified conversion to Christ and incorporation into his Body, the Church. Lent, once dreaded, has become popular: churches are full on Ash Wednesday, and the disciplines of Lent—fasting, almsgiving, intensified prayer—have now been relocated properly within the great human adventure of continuing conversion. Celebrated with appropriate solemnity, the Paschal Triduum today is what it should be: the apex of the liturgical year, in which those who were initially conformed to Christ in Baptism, along with those baptized at the Easter Vigil, relive the Master’s Passion and Death in order to experience the joy of the Resurrection, the decisive confirmation that God’s purposes in history will be vindicated.This revival of Lent in the Catholic Church has involved the rediscovery of the Forty Days as a season shaped by the catechumenate: the period of education and formation through which adults who have not yet been baptized are prepared to receive Baptism, Confirmation, and the Holy Eucharist, the three sacraments of Christian initiation, at the Easter Vigil. The baptismal character of Lent is not for catechumens only, however. The adult catechumenate (called the Rite of Christian Initiation of Adults) offers an annual reminder to the Church that allalways in need of conversion. The Church’s conversion, the Church’s being-made-holy, is a never-ending process.Baptism, the Scriptures tell us, is “for the forgiveness of sins.” And while that central aspect of the sacrament is most dramatically manifest in the baptism of adults at the Easter Vigil, those who were baptized in infancy , and who, as all do, inevitably fall into sin, are also in need of forgiveness. Thus baptism “for the forgiveness of sins,” which is such a prominent theme throughout Lent, reminds all the baptized that they, too, require liberation from sin: from the bad habits that enslave us and impede our friendship with Christ. To make the pilgrimage of Lent is to follow an itinerary of conversion. Lent affords every baptized Christian the opportunity to reenter the catechumenate, to undergo a “second baptism,” and thus to meet once again the mysteries of God’s mercy and love….The Bible includes three paradigmatic forty-day periods of fasting and prayer: that of Moses, who prepared for forty days to receive to receive the Ten Commandments, the moral code that God gives his chosen people to help them avoid falling back into the habits of slaves [Deuteronomy 9.9]; that of Elijah, who fasted “forty days and forty nights [at] Horeb the mount of God,” prior to hearing the “still, small voice” of the Lord passing by [1 Kings 19:8]; and that of Jesus, prior to his temptation. Thus the “forty days” of Lent—Ash Wednesday through Holy Saturday, exclusive of Sundays (which were always exempted from the Lenten fast as the disciplines of the season became defined)—evoke two great figures from the Hebrew Bible, Moses the lawgiver and Elijah the model of prophecy, as well as the Lord’s own fast in the desert, which is variously described in the gospels of Matthew, Mark, and Luke as the crucial prelude to his public ministry. In all three biblical instances, these forty days are a stepping-aside from the ordinary rhythms of life in order to be more open to the promptings of the spirit of God, and thus more deeply converted to walking along God’s path through history. That “stepping aside” is a primary characteristic of Lent and, according to the ancient tradition of the Church, is embodied in almsgiving and intensified prayer as well as fasting. The three practices go together. “Giving up _____” for Lent would have little more meaning than a weight-loss program were it not accompanied by a deeper encounter with Father, Son, and Holy Spirit through prayer, spiritual reading, and reflection and a new concern for those in need. Thus the special practices of the Forty Days, like the liturgies of each day of Lent, constantly bring the Christian back to the primordial call of Christ: “Repent, and believe in the Gospel” [Mark 1.15].
—George Weigel, Roman Pilgrimage: The Station Churches

Roman Stational churches or station churches are the churches that are appointed for special morning and evening services during Lent, Easter and some other important days during the Liturgical Year. This ancient Roman tradition started in order to strengthen the sense of community within the Church in Rome, as this system meant that the Holy Father would visit each part of the city and celebrate Mass with the congregation.

"So vividly was the station saint before the minds of the assembled people that he seemed present in their very midst, spoke and worshiped with them. Therefore the missal still reads, "Statio ad sanctum Paulum," i.e., the service is not merely in the church of St. Paul, but rather in his very presence. In the stational liturgy, then, St. Paul was considered as actually present and acting in his capacity as head and pattern for the worshipers. Yes, even more, the assembled congregation entered into a mystical union with the saint by sharing in his glory and by seeing in him beforehand the Lord's advent in the Mass" (Pius Parsch, The Church's Year of Grace, Vol. 2, p. 71).For more information, see:

Ash Wednesday:
Station with Santa Sabina all'Aventino (St. Sabina at the Aventine):
The first stational church during Lent is Santa Sabina at the Aventine (Basilica of St. Sabina). It was built in the 5th century, presumably at the site of the original Titulus Sabinae, a church in the home of St. Sabina who had been martyred c. 114. The tituli were the first parish churches in Rome. St. Dominic lived in the adjacent monastery for a period soon before his death in 1221. Among other residents of the monastery were St. Thomas Aquinas.