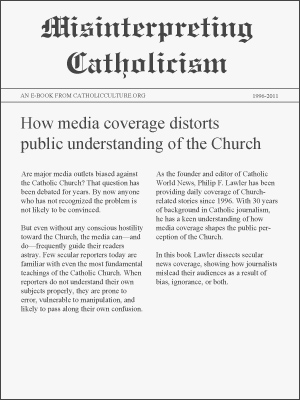 How media coverage distorts public understanding of the Church

Are major media outlets biased against the Catholic Church? That question has been debated for years. By now anyone who has not recognized the problem is not likely to be convinced. But even without any conscious hostility toward the Church, the media can—and do—frequently guide their readers astray. Few secular reporters today are familiar with even the most fundamental teachings of the Catholic Church. When reporters do not understand their own subjects properly, they are prone to error, vulnerable to manipulation, and likely to pass along their own confusion. As the founder and editor of Catholic World News, Philip F. Lawler has been providing daily coverage of Church-related stories since 1996. With 30 years of background in Catholic journalism, he has a keen understanding of how media coverage shapes the public perception of the Church. In this book he dissects secular news coverage, showing how journalists mislead their audiences as a result of bias, ignorance, or both.