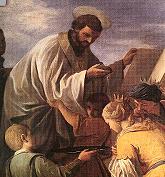 An explanation of the Lenten themes of Baptism and Penance and how it relates to us.

In the ancient church, the sacrament of Baptism was usually performed once a year at Easter. Only adults who were educated in the Catholic Faith were baptized. No one could be baptized until they had learned the catechism. When a person had a sufficient grasp of the Faith, he/she was put forth as a candidate, or "catechumen." Final examinations or "scrutinies" were given to these catechumens 40 days before Easter to decide who was ready to be baptized at Easter. Lent was originally a time of final preparation for the reception of the sacrament of Baptism at the Easter Vigil. Infant Baptism was rare until the beginning of the fifth century. But it was always regarded as valid and as an apostolic institution, as we know from Irenaeus, Origen and St. Cyprian. Sponsors at the Baptism of children are mentioned as early as A.D. 200 by Tertullian.

The focus on our baptismal vows and the participation in voluntary acts of penance during Lent, as practiced by the early Church, needs to be recaptured. Vatican II, as stated through Sacrosanctum Concilium (Constitution on the Sacred Liturgy), urges this return to this original spirit of Lent:

The two elements which are especially characteristic of Lent—(1) the recalling of baptism or the preparation for it, and (2) penance—should be given greater emphasis in the liturgy and in liturgical catechesis. It is by means of them that the Church prepared the faithful for the celebration of Easter, while they hear God's word more frequently and devote more time to prayer.

The General Norms for the Liturgical Year and Calendar and Ceremonial of Bishops from 1969 echoes this exhortation: 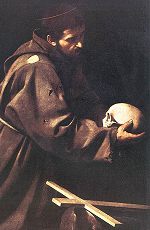 Through the two-fold theme of repentance and baptism, the season of Lent disposes both the catechumens and the faithful to celebrate the paschal mystery. Catechumens are led to the sacraments of initiation by means of the rite of election, the scrutinies, and catechesis. The faithful, listening more intently to the word of God and devoting themselves to prayer, are prepared through a spirit of repentance to renew their baptismal promises.

Catechesis should impress upon the minds of the faithful not only the social consequences of sin but also the essence of the virtue of penance, namely, detestation of sin as an offense against God. The role of the Church in penitential practices is not to be neglected, and the people are to be exhorted to pray for sinners.

During Lent penance should not be only inward and individual but also outward and social, and should be directed toward works of mercy on behalf of our brothers and sisters.

The faithful should be urged to take a greater and more fruitful share in the Lenten liturgy and penitential services. They should be advised particularly to approach the sacrament of penance during Lent, in accordance with the law and traditions of the Church, so that they may share in the joys of Easter Sunday with purity of heart" (as taken from Daily Roman Missal copyright 1993, Fr. James Socias).