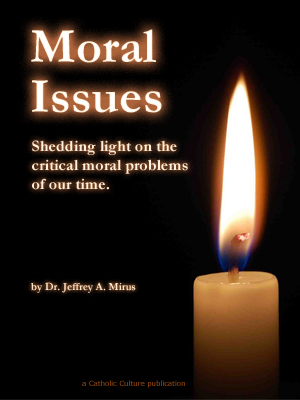 Shedding light on the critical moral problems of our time

The thirty-six essays collected here are the most compelling and enduringly useful of over one hundred moral essays by Dr. Jeffrey Mirus published on CatholicCulture.org between 2004 and 2011. In addition to four introductory and closing essays on moral theory and moral witness, they cover—in alphabetical order—such issues as abortion, animal rights, biomedical issues, capital punishment, contraception, environmentalism, health care, homosexuality, lying, marriage and gay marriage, the objectification of women and pornography, suicide and war. In these essays, Mirus sometimes establishes the simple right or wrong of a particular moral question, and at other times he explores important related issues, side effects and repercussions. The various issues cannot be separated completely, both because all moral issues are intrinsically related and because the predispositions, strengths and weaknesses of a particular culture cause that culture to deal with all moral issues in similar ways. Taken together, these essays open an important window on the moral landscape of the Western world in the twenty-first century after Christ.