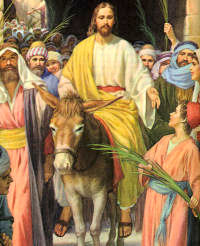 So they took branches of palm trees and went out to meet him, crying, "Hosanna! Blessed is he who comes in the name of the Lord, even the King of Israel!" And Jesus found a young ass and sat upon it; as it is written, "Fear not, daughter of Zion; behold, your king is coming, sitting on an ass's colt!" (Jn 12:13-15).

Today we commemorate Christ's entry into Jerusalem for the completion of the Paschal Mystery. In the old calendar before Vatican II, the Church celebrated Passion Sunday two Sundays before Easter, and then Palm Sunday was the beginning of Holy Week. The Church has combined the two to reinforce the solemnity of Holy Week.The Palm Sunday procession is formed of Christians who, in the "fullness of faith," make their own the gesture of the Jews and endow it with its full significance. Following the Jews' example we proclaim Christ as a Victor... Hosanna to the Son of David! Blessed is He who comes in the Name of the Lord. But by our faith we know, as they did not, all that His triumph stands for. He is the Messiah, the Son of David and the Son of God. He is the sign of contradiction, acclaimed by some and reviled by others. Sent into this world to wrest us from sin and the power of Satan, He underwent His Passion, the punishment for our sins, but issues forth triumphant from the tomb, the victor over death, making our peace with God and taking us with Him into the kingdom of His Father in heaven. Today is the feast of St. Vincent Ferrer which is superseded by the Sunday Liturgy.Stational Church

Our joy is quickly subdued. We are jolted to reality and see the purpose of Christ coming to Jerusalem by the reading of the Passion at the Gospel. (Written by Jennifer Gregory Miller)