Mary Reed Newland ties in Jesus' death and resurrection with the type of Christ, Jonas (Jonah).

Once when Our Lord was going about healing, they brought to Him a man who was blind and dumb and possessed by a devil, and He cured him and drove out the devil. Then the Pharisees, bitter in their hearts to see that He could do these things, accused him of casting out devils by the power of the devil.

Our Lord turned on them. That was ridiculous, He said, and He likened the soul of the man to a kingdom in which the King, if he held the kingdom, would not war against himself to drive himself out of his own kingdom. If the devil possessed a soul, he would not come to the aid of a man who was trying to drive the devil out of the soul. And He warned the Pharisees in very strong language that to sin against the Holy Spirit, which is to deny the known truth when you know it is the truth, was an unforgivable sin and would not be forgiven in this world or in the world to come (which would mean Purgatory).

So the slippery sly Pharisees asked him: "Master, we would see a sign from thee." As though they had not just seen a very great sign, a miracle, when He had healed the man blind and dumb and driven out his devil. This made Our Lord very angry indeed and He must have shouted at them.

He would not give them a sign, He said, because they were evil and adulterous; the only sign they would be given would be the sign of Jonas the prophet. "For even as Jonas was in the belly of the fish three days and three nights; so will the Son of Man be three days and three nights in the heart of the earth." (So the story of Jonas is a prophecy. We never realized that, all these years.)

This story from the Gospel of St. Matthew, chapter 12, beginning with verse 22, is the Gospel for the Mass on Ember Wednesday, the first week in Lent. It is a good Gospel to read aloud together. Then, in order to see exactly what did happen to Jonas, find the Book of Jonas in the Old Testament and read it aloud (it is very short).

Once a little girl said to Monica: "I believe all the stories in the Bible but one, that silly story about Jonas and the whale. Anybody that knows anything knows a man couldn't live inside of a fish for three nights and three days."

Monica said (and she was quite small): "Oh well, I guess if God could make the world out of nothing He could make a man live inside a fish if He wanted to." And that was that.

Jonas was commanded by God to warn the people of Ninive that their wickedness would be punished. He would destroy them and their city. But Jonas was afraid (they were that wicked, in addition to being Gentiles), so he hurried off to the seashore and boarded a ship bound in the opposite direction. Then God sent a storm on the sea to sink the ship, and the captain and crew tried throwing the cargo overboard to lighten it, but in vain. Finally the captain ran down to the hold to find Jonas and cried out in words like this: "Why are you asleep? Get up, and pray to your God to ask Him to save us or we will perish!"

In the meantime, up on deck the sailors became suspicious that there was more to the situation than met the eye; so they decided to draw lots to see if God would indicate who was to blame. They did this, and it came to light that Jonas was to blame. Then they asked him who he was, and where he was going, and whence he came; and Jonas told them he was running away from God. So the sailors asked what they should do to him, and Jonas admitted there was nothing to do but throw him in the sea. The sailors must have been loath to do this; they even tried to row back to land, but to no avail. So finally and regretfully they threw Jonas into the sea.

"Now the Lord prepared a great fish to swallow up Jonas, and Jonas was in the belly of the fish three nights and three days." And Jonas prayed to God, and cried out with great faith that he knew God would deliver him from the deep. So when three days were done, God made the fish vomit out Jonas upon the dry land.

After Jonas was raised up out of the sea, God again sent him to Ninive. This time Jonas obeyed. He told the Ninivites that God would destroy them for their wickedness at the end of forty days. 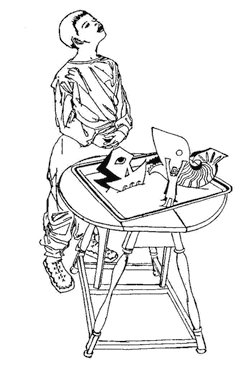 Now the men of Ninive believed in God; so their king proclaimed a great fast that would include all the inhabitants of the city, even the beasts. All were to take off their garments and put on sackcloth; there were even to be sackcloth garments for the beasts. And the king wore sackcloth and sat in ashes. No one, he said, was to eat or drink, not even the beasts, and all were to turn from their evil ways and ask the Lord to deliver them. So at the end of forty days, God saw their good works and had mercy on them, and did not send the punishment He had promised.

There is one of the types of Lent. And of course Jonas — safe and alive after the three days and three nights in the whale — is a type of the Resurrection.

But there is more, and this relates to God's teaching that the Jews were not to be so proud, nor to despise the Gentiles.

When Jonas saw that the Lord refused to destroy Ninive, he became very angry. Not because he was so bloodthirsty that he wanted to see them die, but because this whole affair was going to make something of a fool out of him. People would call him a false prophet; not only that, but in the future they would ignore the warnings of God, saying He did not keep His word. More and more angry, he begged God to let him die. But God only asked him if he thought he hat good reason to be angry.

Then Jonas went out a little from the city, toward the east, and built himself a hut and sat there watching to see if anything would happen. Now God in His goodness let a vine grow up the side of the hut to shade Jonas. And Jonas was very glad, because he was fatigued (it was a big city and that was a lot of running around). But in the night God sent a worm that gnawed the vine, so that it shriveled and died. Then He sent a hot dry wind, and a hot burning sun, and Jonas "broiled with the heat." Then he got really angry. "It is better for me to die than to live!"

Then God asked (putting it in our kind of words), "Do you think you have reason to be angry on account of the vine?"

And Jonas answered, "I am angry, with reason, even unto death."

God said: "You are grieved about the vine, for which you neither worked, nor made it grow, which in one night grew and in one night perished. Shall I not spare Ninive, that great city, in which there are more than one hundred and twenty thousand persons" — and He used a phrase which, translated into our idiom, says "who know neither their right hand from their left"?

Aren't we like Jonas? We like to have things just so. We demand to know why God does things and why He doesn't. We like to say that this is fair, and that is not. Our mercy really does not extend very far. But God's mercy does. Lent is a magnificent example of it. We adored Him at Bethlehem, and hardly finished, we betrayed Him with all our mean little secret sins and our horrid big ones. We ought to be made to pay with our lives, for even they are a gift from Him. But Christ in His Church offers us forty days to fast and pray; and at the end, He promises, His love will triumph over sin and death: at the end He will show us the sign of Jonas.

One of the symbols of this sign of Jonas — in other words, the Resurrection — is a gourd, which recalls the vine (assuming it was a gourd vine). It is interesting to know that there has been disputing over this vine ever since the beginning. Some scholars are sure it was the castor bean (a bush), some (among them St. Augustine) the gourd. If so, it is quite possible that it was a crook-necked squash. Remember this, next time you serve squash, and you will have, also, a conversation piece. At any rate, the symbol used is a gourd, and when it is used with an apple it symbolizes the triumph of the Resurrection over original sin. As Easter egg decoration, these symbols tell the whole meaning of Easter.