September 2022 — Overview for the Month 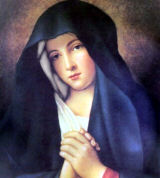 The month of September is dedicated to Our Lady of Sorrows, whose memorial the Church celebrates on September 15.

September 14
Triumph of the Cross

This feast commemorates the rescue of the true Cross of Christ by Emperor Heraclius in a victory over the Persians. Our Mother the Church sings of the triumph of the Holy Cross, the instrument of our salvation.

Recipe of the Month

Activity of the Month

The Feast of the Exaltation of the Cross is an appropriate feastday to thank God for the blessing of Christ dying on the Cross, which opened the gates of heaven for mankind. Here is a family project which involves making a homemade cross.

The Monogram of the Blessed Virgin. The letters of the name "Maria" are evident in this ancient symbol. A crown was sometimes placed over the monogram by medieval artists.

The moneybags refer to the occupation of St. Matthew before he was called to follow Christ. He was a tax gatherer known as Levi.

The great work of the Archbishop of Constantinople to overcome crime, heresy, and corruption was interrupted by avaricious enemies who effected his exile, which lasted four years, and ended with his death.

One of the Four Western Fathers, along with Sts. Augustine of Hippo, Ambrose of Milan and Gregory the Great. He contributed courage and wisdom in his defense of the truth. His translation of the Bible into Latin, known as the Vulgate, is in general, the version authorized in the Roman Catholic Church. 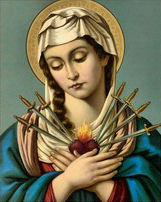 O afflicted Virgin, O soul great in virtues, as in sorrows, both the one and the other spring from that great fire burning in they heart for God, the only love of thy heart! —St. Alphonsus Ligouri

Shop: Roman Catholic "RC" Brand Original Black Logo Collection Embroidered Beanie - Black | Multiple colors available!
September falls during the liturgical season known as Tempus per Annum or Ordinary Time (formerly Time After Pentecost, which is represented by the liturgical color green. Green is a symbol of hope, as it is the color of the sprouting seed and arouses in the faithful the hope of reaping the eternal harvest of heaven, especially the hope of a glorious resurrection. The liturgical color green is worn during prayer of Offices and Masses of Ordinary Time.

The Holy Father's Intentions for the Month of September 2022

For the abolition of the death penalty: We pray that the death penalty, which attacks the dignity of the human person, may be legally abolished in every country. (See also http://www.popesprayerusa.net/)


Focus of the Liturgy

The Gospels for the Sundays in September 2022 are from the Gospel of St. Luke from Cycle C, Weekdays following Year II.

Highlights of the Month 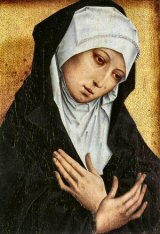 During September, as in all of Tempus per Annum, or Ordinary Time (formerly known as Time After Pentecost), the Liturgy does not focus on one particular mystery of Christ, but views the mystery of Christ in all its aspects. We follow the life of Christ through the Gospels, and focus on the teachings and parables of Jesus and what it means for us to be a follower of Christ. During Ordinary Time we can concentrate more on the saints and imitate their holiness as Christ's followers.

Month of the Harvest 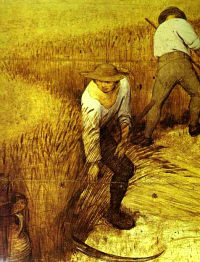 Since man is both a spiritual and physical being, the Church provides for the needs of man in his everyday life. The Church's liturgy and feasts in many areas reflect the four seasons of the year (spring, summer, fall and winter). The months of August, September, October and November are part of the harvest season, and as Christians we recall God's constant protection over his people and give thanksgiving for the year's harvest.

The September Ember Days were particularly focused on the end of the harvest season and thanksgiving to God for the season. Ember Days were three days (Wednesday, Friday and Saturday) set aside by the Church for prayer, fasting and almsgiving at the beginning of each of the four seasons of the year. The ember days fell after December 13, the feast of St. Lucy (winter), after the First Sunday of Lent (spring), after Pentecost Sunday (summer), and after September 14, the feast of the Exaltation of the Holy Cross, after the Third Sunday of September (autumn). These weeks were known as the quattor tempora, the "four seasons."

Since the late 5th century, the Ember Days were also the preferred dates for ordination of priests. So during these times the Church had a threefold focus: (1) sanctifying each new season by turning to God through prayer, fasting and almsgiving; (2) giving thanks to God for the various harvests of each season; and (3) praying for the newly ordained and for future vocations to the priesthood and religious life.

Since the reorganization of the Roman calendar in 1969 after the Second Vatican Council, Ember Days are still retained in principle, but how and when they are to be observed is at the discretion of each country's Episcopal Conference. There is no longer set Mass readings for the Ember Days in the current Roman Missal.

Another harvest feast is September 29, the Feast of the Archangels Michael, Gabriel and Raphael. Before the revision of the calendar, this used to be only the feast of St. Michael. In many countries this day was referred to as "Michaelmas" and celebrated with traditional foods and customs.

Explanation of Ember Days—Three days set apart for fasting, abstinence, and prayer during each of the four seasons of the year. They were the Wednesday, Friday and Saturday after St. Lucy (or Lucia, d. 304) (December 13), the First Sunday of Lent, Pentecost, and the feast of the Holy Cross (September 14). Since the revision of the Roman calendar in 1969, Ember Days are to be observed at the discretion of the National Conference of Bishops. Moreover, their observance may be extended beyond three days and even repeated during the year. Possibly occasioned by the agricultural feasts of ancient Rome, they came to be observed by Christians for the sanctification of the different seasons of the year, and for obtaining God's blessing on the clergy to be ordained during the Embertides. (Etym. Anglo-Saxon oemerge, ashes.)
—Modern Catholic Dictionary by John A. Hardon, SJ, Doubleday, 1980.