Passiontide and Veiling of Images 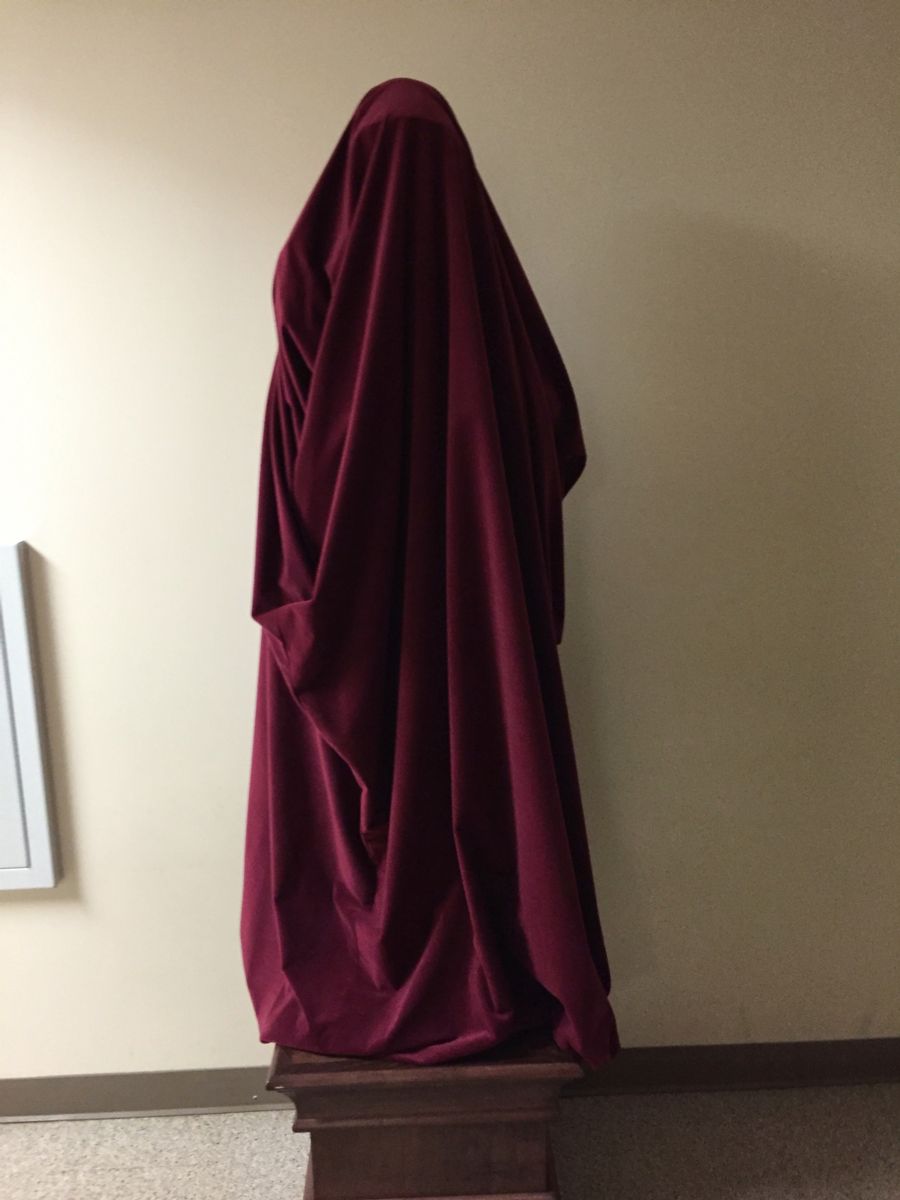 From the archives: This was originally posted for Passiontide 2016.

Yesterday when I dropped my son off for classes at the homeschool co-op in the neighboring parish, we noticed the veiled statues around the church and chapel. Our parish doesn’t follow this tradition, so it was a wonderful opportunity to discuss and research a little about the veiling of statues. The tradition is not limited to those who attend the Latin Extraordinary Form of the Mass, but it is universally accepted in the United States in both the Ordinary and Extraordinary Forms.

Tradition of the Hunger Cloth

Covering crosses, statues and images or “veiling” with unadorned violet opaque cloths begins on the Saturday before the 5th Sunday of Lent. It is an older custom of the Church that remains an option even to this day. The exact era it began no one is sure, but the origins seem to come from an medieval tradition of the “hunger cloth” which was a huge violet cloth hung in front of the altar to keep the congregation from viewing the altar. Originally Lent was a time that public sinners were “banished” from the church and had to do a public display of penance. Over time the understanding that everyone is a sinner prevailed and sinners were no longer restricted from the liturgy in church, but the hunger cloth gave all attending a “fast of the eyes.” The cloths over time changed to smaller sizes and with more decorations.

The actual covering of images came later, perhaps continuing that theme of “fasting of the eyes.” According to Adolf Adam’s The Liturgical Year,

At the end of the thirteenth century Bishop William Durandus of Mende (Southern France) explains this custom by the fact that Christ veiled his divinity during his passion. Durandus saw this explanation as implied in this Sunday’s gospel (from pre-Vatican II), the concluding sentence of which read: “But Jesus hid himself and left the temple” (John 8:59). Prior to Vatican II the editors of the Schott Missal saw the veiling of crosses and so on as intended “to remind us of the Redeemer’s humiliation and thus to imprint the image of the crucified Christ more deeply on our hearts.”

In other cultures, the covering of images is seen more like shrouding, as in a death shroud. I have a dear friend from Iran who is very unsettled by the covering of the statues. But I have thought much about her reaction, and it actually gave more weight to the tradition to me, because we are focusing on the death of our sinful selves and putting on a new life. We are putting on Christ at Easter, and the coverings help us remember that focus.

In the 1962 calendar (and before), Lent had a division, so that the last two weeks was considered “Passiontide”—time more focused on the passion and death of Christ. The Fifth Sunday of Lent was called “Passion Sunday.” This was when the images were covered. Even in the revised liturgy, these last two weeks, especially Holy Week do continue to dwell more closely on the sufferings of Christ, but the name of Passiontide was removed. Again, from Adolf Adam:

On the other hand, we may not overlook the fact that the entire season of Lent speaks of the Lord’s passage through suffering and death to resurrection. The decision to eliminate the name “Passiontide” is explained in the commentary on the General Norms for the Liturgical Year and the Calendar as based on the desire “to preserve the internal unity of Lent. The Sunday now known as the First Sunday of the Passion will henceforth be the Fifth Sunday of Lent, as in the Ambrosian Rite” (The Liturgical Year, 105-106).

The older calendar’s Passion Sunday is now combined with Palm Sunday in the current calendar, so the official title is “Palm Sunday of the Passion of Our Lord.”

Whether one attends the Ordinary or Extraordinary Form of the Roman Rite, the covering of sacred images can be practiced in both. The rubrics in The Third Edition of the Roman Missal states,

According to Monsignor Peter J. Elliott:

The custom of veiling crosses and images in these last two weeks of Lent has much to commend it in terms of religious psychology, because it helps us to concentrate on the great essentials of Christ’s work of Redemption. The episcopal conference decides whether this should be obligatory within its territory, but any pastor may choose to restore or maintain this wise practice in his own parish (Ceremonies of the Liturgical Year).

And even though the term “Passion Sunday” is no longer used, another remaining vestige of Passiontide is that the First Preface of the Passion is used during the Fifth Week of Lent, no longer the Lenten prefaces. 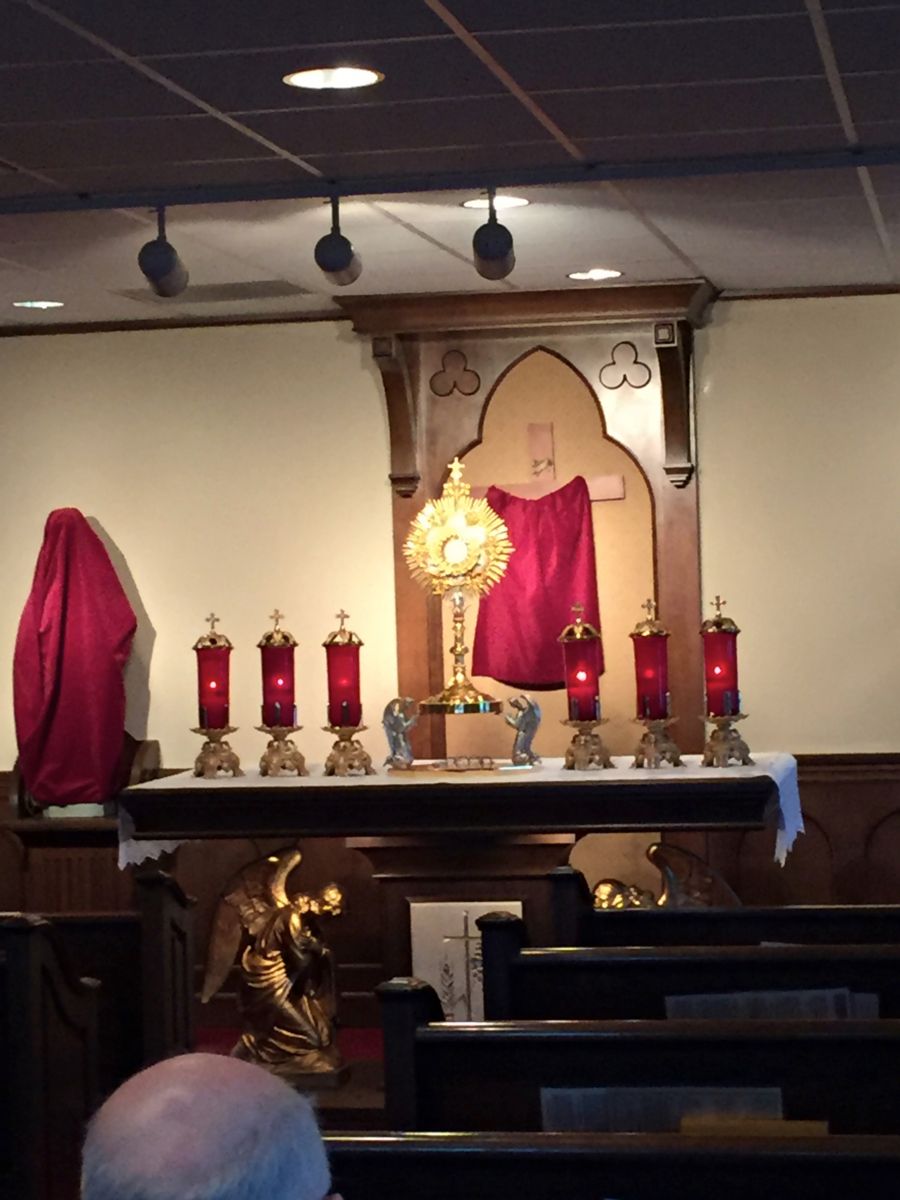 The cloths are to be plain fabric, preferably light material, with no decoration. Before the vigil Mass or Evening Prayer I of the Fifth Sunday of Lent all statues and images except the Stations of the Cross and stained-glass windows are veiled. Older liturgical books reference papal permission in 1878 to keep St. Joseph uncovered in March since it is his feast month. After the Good Friday ceremonies all crosses are unveiled. In the Ordinary Form, the coverings are removed without any liturgical ceremony before the Easter Vigil begins. Sometimes in the Extraordinary Form the images are not uncovered until the Gloria is sung at the Easter Vigil.

The Triduum is so near. Last Sunday we celebrated with great joy that we had reached the halfway mark, and this Sunday we have a visual that reminds us that we are only two weeks away from Easter. The covering of sacred images is a beautiful custom that can perhaps lead us to greater contemplation as we walk with Jesus through His Passion, Death, and Resurrection. Our eyes are not drawn away to other objects and we can turn our focus to the altar and inward to contemplate Christ.