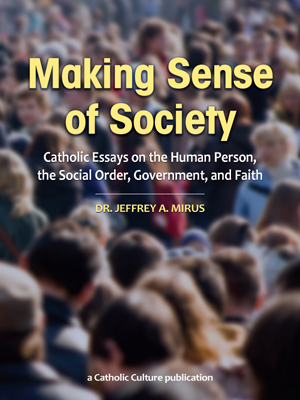 Catholic Essays on the Human Person, the Social Order, Government and Faith

Collected essays from 2007 through 2012 on such things as the purpose of government, including its size and scope; the interaction among culture, social life, politics and religion; the role of the Church in the social order; the relationship between what are commonly called the “life” issues and the “social” issues; the somewhat odd set of social prejudices which characterize the modern secular West; the threat of Statism; the principles of Catholic social teaching, such as subsidiarity, solidarity and the universal destination of goods; the role of natural law; and an analysis of complex specific issues such as immigration, pro-life strategy, and moral voting. Jeffrey A. Mirus is the founder of Trinity Communications and CatholicCulture.org, as well as a co-founder of Christendom College. He has been a Catholic apologist and commentator on Catholic affairs for over forty years.