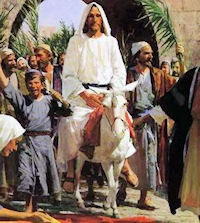 Jesus is our "example;" let us never lose sight of the eternal joy of "sharing in His Resurrection," when with Him we now "suffer on a cross" (Prayer).In glorious language we read how the Son of God became the "slave" of man; how "He humbled Himself" and is now our pledge "in the glory of God the Father" (Epistle).Even as Christ adhered to the Father, so must we, despite the seeming "prosperity of the sinner" (Gradual).The "long Gospel" enables us, as it were, to be eyewitnesses of Christ's Passion and Death, revealing His love "unto the end" (indicated by Calvary in the background).Excerpted from My Sunday Missal, Confraternity of the Precious Blood