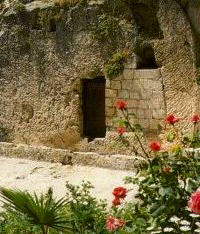 Christ became obedient for us unto death, even to the death of the cross. Amen.

On Holy Saturday the Church waits at the Lord's tomb, meditating on his suffering and death. The altar is left bare, and the sacrifice of the Mass is not celebrated. Only after the solemn vigil during the night, held in anticipation of the resurrection, does the Easter celebration begin, with a spirit of joy that overflows into the following period of fifty days.

Outside of Holy Week, the Church clelebrates the Optional Memorial of St. Stanislaus, bishop & martyr. St. John Baptist de La Salle was born in Rheims, France. He was known as the Father of Modern Pedagogy. He opened free schools for poor children, introducing new teaching methods. He organized the congregation called the Brothers of the Christian Schools, which made great contributions to popular education.Stational Church 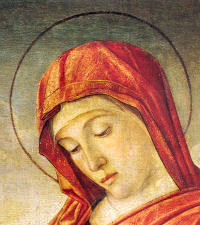 Holy Saturday (from Sabbatum Sanctum, its official liturgical name) is sacred as the day of the Lord's rest; it has been called the "Second Sabbath" after creation. The day is and should be the most calm and quiet day of the entire Church year, a day broken by no liturgical function. Christ lies in the grave, the Church sits near and mourns. After the great battle He is resting in peace, but upon Him we see the scars of intense suffering...The mortal wounds on His Body remain visible...Jesus' enemies are still furious, attempting to obliterate the very memory of the Lord by lies and slander.

Mary and the disciples are grief-stricken, while the Church must mournfully admit that too many of her children return home from Calvary cold and hard of heart. When Mother Church reflects upon all of this, it seems as if the wounds of her dearly Beloved were again beginning to bleed.

According to tradition, the entire body of the Church is represented in Mary: she is the "credentium collectio universa" (Congregation for Divine Worship, Lettera circolare sulla preparazione e celebrazione delle feste pasquali, 73). Thus, the Blessed Virgin Mary, as she waits near the Lord's tomb, as she is represented in Christian tradition, is an icon of the Virgin Church keeping vigil at the tomb of her Spouse while awaiting the celebration of his resurrection.

The pious exercise of the Ora di Maria is inspired by this intuition of the relationship between the Virgin Mary and the Church: while the body of her Son lays in the tomb and his soul has descended to the dead to announce liberation from the shadow of darkness to his ancestors, the Blessed Virgin Mary, foreshadowing and representing the Church, awaits, in faith, the victorious triumph of her Son over death.

—Directory on Popular Piety and the Liturgy

Although we are still in mourning, there is much preparation during this day to prepare for Easter. Out of the kitchen comes the smells of Easter pastries and bread, the lamb or hams and of course, the Easter eggs.

There are no liturgies celebrated until the Easter Vigil. Some local parish priests bless the food baskets on this day. In Slavic countries there is a blessing of the traditional Easter foods, prepared in baskets: eggs, ham, lamb and sausages, butter and cheeses, horseradish and salt and the Easter breads. The Easter blessings of food owe their origin to the fact that these particular foods, namely, fleshmeat and milk products, including eggs, were forbidden in the Middle Ages during the Lenten fast and abstinence. When the feast of Easter brought the rigorous fast to an end, and these foods were again allowed at table, the people showed their joy and gratitude by first taking the food to church for a blessing. Moreover, they hoped that the Church's blessing on such edibles would prove a remedy for whatever harmful effects the body might have suffered from the long period of self-denial. Today the Easter blessings of food are still held in many churches in the United States, especially in Slavic parishes.

The entire celebration of the Easter Vigil must take place during the night, so that it begins after nightfall and ends before daybreak on the Sunday. See further details on the Easter Vigil Liturgy.

Holy Saturday—Easter Vigil of the Sacred Triduum
Station with San Giovanni in Laterano (St. John Lateran):
The Station returns again to St. John Lateran. During the afternoon of Holy Saturday the faithful were summoned here for the final scrutiny of the catechumens. Then, in the evening began the vigil or night of watching which concluded at dawn with the solemn baptisms—the neophytes, plunged into the baptismal waters and there buried with Christ, were born to the life of grace at the very time when our Savior came forth triumphant from the tomb at dawn on Easter morning.