Other Titles: Fourth Day within the Octave of the Nativity of the Lord (Christmas) 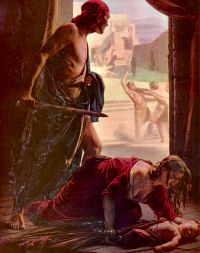 O God, whom the Holy Innocents confessed and proclaimed on this day, not by speaking but by dying, grant, we pray, that the faith in your which we confess with our lips may also speak through our manner of life. Through our Lord Jesus Christ, your Son, who lives and reigns with you in the unity of the Holy Spirit, God, for ever and ever.

“A voice is heard in Ramah, weeping and great mourning, Rachel weeping for her children and refusing to be comforted, because they are no more.”

During this octave of Christmas the Church celebrates the memory of the small children of the neighborhood of Bethlehem put to death by Herod. Sacrificed by a wicked monarch, these innocent lives bear witness to Christ who was persecuted from the time of His birth by a world which would not receive Him. It is Christ Himself who is at stake in this mass-murder of the children; already the choice, for or against Him, is put clearly before men. But the persecutors are powerless, for Christ came to perform a work of salvation that nothing can prevent; when He fell into the hands of His enemies at the time chosen by God it was to redeem the world by His own Blood.Our Christmas joy is tempered today by a feeling of sadness. But the Church looks principally to the glory of the children, of these innocent victims, whom she shows us in heaven following the Lamb wherever He goes.

The Holy Innocents saved the Child Jesus from death by King Herod by the shedding of their own blood. The Holy Innocents are the special patrons of small children, who can please the Christ Child by being obedient and helpful to parents, and by sharing their toys and loving their siblings and playmates.

The feast of the Holy Innocents is an excellent time for parents to inaugurate the custom of blessing their children. From the Ritual comes the form which we use on solemn occasions, such as First Communion. But parents can simply sign a cross on the child's forehead with the right thumb dipped in holy water and say: May God bless you, and may He be the Guardian of your heart and mind—the Father, + Son, and Holy Spirit. Amen. 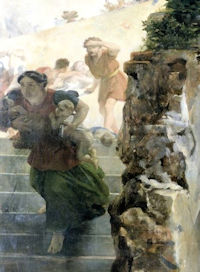 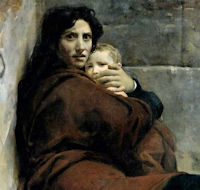 "Blessed are you, Bethlehem in the land of Judah! You suffered the inhumanity of King Herod in the murder of your babes and thereby have become worthy to offer to the Lord a pure host of infants. In full right do we celebrate the heavenly birthday of these children whom the world caused to be born unto an eternally blessed life rather than that from their mothers' womb, for they attained the grace of everlasting life before the enjoyment of the present. The precious death of any martyr deserves high praise because of his heroic confession; the death of these children is precious in the sight of God because of the beatitude they gained so quickly. For already at the beginning of their lives they pass on. The end of the present life is for them the beginning of glory. These then, whom Herod's cruelty tore as sucklings from their mothers' bosom, are justly hailed as "infant martyr flowers"; they were the Church's first blossoms, matured by the frost of persecution during the cold winter of unbelief. —St. AugustinePatronage: against ambition; against jealousy; altar servers; babies; children; children’s choir; choir boys; foundlings; studentsHighlights and Things to Do:

December 28, Feast of the Holy Innocents
Station with San Paolo fuori le mura (St. Paul Outside the Walls):
It is natural that with the feast of Christmas there should be associated the anniversary of those Saints who hold a rank apart amongst martyrs, as they were martyred out of hatred for the Infant born at Bethlehem, and thus unconsciously bore witness to Him. The station is at St. Paul's-Outside-the-Walls, which is unusual, owing to the distant situation of this basilica, but it claims to possess several of the bodies of these little Holy Innocents, and thus is quite reasonable to be the stational church for their feast.
For more info, see:
Vatican on the Basilica
Roman Churches
PNAC