Feast of All Souls 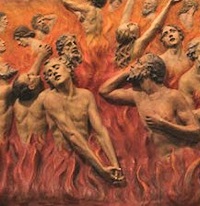 Merciful Father, hear our prayers and console us. As we renew our faith in your Son, whom you raised from the dead, strengthen our hope that all our departed brothers and sisters will share in his resurrection, who lives and reigns with you and the Holy Spirit, one God, for ever and ever. Amen.

"On this day is observed the commemoration of the faithful departed, in which our common and pious Mother the Church, immediately after having endeavored to celebrate by worthy praise all her children who already rejoice in heaven, strives to aid by her powerful intercession with Christ, her Lord and Spouse, all those who still groan in Purgatory, so that they may join as soon as possible the inhabitants of the heavenly city." — Roman Martyrology

Every priest is permitted to say three Masses on this day and it would be a good practice for the laity to attend three Masses and offer them for the Poor Souls.

The Church, after rejoicing yesterday with those of her children who have entered the glory of heaven, today prays for all those who, in the purifying suffering of purgatory await the day when they will be joined to the company of saints. At no place in the liturgy is stated in more striking fashion the mysterious union between the Church triumphant, the Church militant and the Church suffering; at no time is there accomplished in clearer fashion the twofold duty of charity and justice deriving for every Christian from the fact of his incorporation in the mystical Body of Christ. By virtue of the consoling doctrine of the communion of saints the merits and prayers of each one are able to help all; and the Church is able to join her prayer with that of the saints in heaven and supply what is wanting to the souls in purgatory by means of the Mass, indulgences and the alms and sacrifices of her children.

The celebration of Mass, the sacrifice of Calvary continued on our altars, has ever been for the Church the principal means of fulfilling towards the dead the great commandment of charity. Masses for the dead are found in the fifth century. But it was St. Odilo, fourth abbot of Cluny, who was responsible for the institution of the general commemoration of all the faithful departed; he instituted it and fixed its celebration on November 2, the day after All Saints. The practice spread to the rest of Christendom.Daily in a special Memento in the Canon of the Mass, at which the priest remembers all those who have fallen asleep in the Lord, the priest implores God to grant them a place of happiness, light and peace. Thus there is no Mass in which the Church does not pray for the faithful departed; but today her thoughts are directed towards them in a particular fashion, with the maternal preoccupation of leaving no soul in purgatory without spiritual aid and of grouping them all together in her intercession. By a privilege that Benedict XV's decree has extended to the whole world every priest can today celebrate three Masses; for the liberation of the souls in purgatory the Church multiplies the offering of the sacrifice of Christ, from which she draws forever on behalf of all her children, infinite fruits of redemption. Things to Do:

Stay in Touch!
PHIL LAWLER
for CatholicCulture.org
CLICK HERE TO OFFER YOUR GIFT!