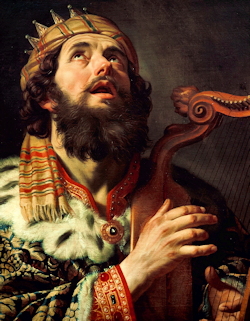 Then Samuel, with the horn of oil in hand, anointed him in the midst of his brothers, and from that day on, the spirit of the LORD rushed upon David. (1 Sam 16:13)

David was the son of Jesse, the youngest of the eight brothers, and the grandson of Ruth and Boaz, of the tribe of Judah. David was the second and greatest king of Israel. He reigned forty years, and is held as the model of Jewish kingship.

The six-pointed star is the emblem of the Royal House of David even to this day. Christ, who is born of the House of David, can truly claim this emblem as His own.

The crown and scepter signify Christ's universal kingship. Christ is not only the King of the Jewish Nation but the "Desired One of all," the cornerstone which unites both Jew and Gentile. David is considered a type of the Messiah.