Isaiah 11:1-3a contains the Messianic Prophecy of the origins of the Messiah:

Translations vary for "the stump of Jesse"; it has also been referred to as the rod, root or stem of Jesse. Isaiah's passage and the genealogy of Jesus as found in the Gospels of Matthew 1:1-17 and Luke 3:23–38 are the main inspiration for art depicting Jesus' family tree. The earliest example can be found in a manuscript from the 11th century, but there are multiple examples of interpretation and depicted in different media (manuscripts, paintings, wood carvings, stone carvings, stained glass, etc.) through the centuries. Jesse is usually depicted as reclining at the base of the image, with vines or branches or stems coming from his "root" and all the different ancestors of Christ depicted, sometimes with other key "players" included, such as different prophets of the Old Testament, with Jesus shown as the flower of Jesse.

During the Middle Ages there was another development in religious art, often referred to as "Mystery Plays"–-drama that depicted various Biblical accounts or lives of the saints. For many years these plays were performed in churches as part of the liturgical celebrations, but then moved to other venues. One such play was based on the account in the Book of Genesis of the fall of Adam and Eve. The "Tree of Life" used during the play was decorated with apples, and also bread for the manna. (This might be the original inspiration for the modern Christmas tree.)

Beginning in the 20th century developed a prayerful tradition of the "Jesse Tree" using the inspiration of the art of the Jesse Tree and the Mystery Play's Tree of Life. Within this practice there is a wide range of interpretation of which figures to include in the Jesse Tree. Some choices are very literal and only use the family line of Jesus, others include salvation history with key biblical figures, including prophets, and still others incorporating events and typology and symbols not always connected with a certain person. Each day a person or type of Christ is pondered, sometimes accompanied with Scripture readings and prayers, and an ornament with the symbols is hung on the Jesse Tree. The "tree" can be a real or artificial tree, a tree branch, a felt or quilted fabric hanging, a jewelry tree, dowels and rods, a poster, etc. 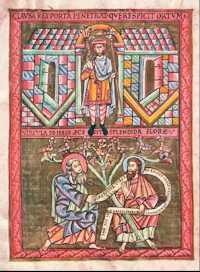 Advent begins on the Sunday nearest to the Feast of St. Andrew the Apostle on November 30, and always includes four Sundays. This means the earliest Advent can begin is November 27, or as late as December 3. It all depends on what day of the week Christmas falls. If Christmas is on a Sunday, that is the longest possible Advent of 28 days. Christmas on a Monday means the shortest Advent of only 22 days.

Catholic Culture's Jesse Tree is expanded to include 28 days for the longest length of Advent (November 27-December 24). This list is a combination of both the genealogy of Christ, several prophets, and also some of the key figures of salvation history. The O Antiphons which begin on December 17 will now be simultaneously presented with the Jesse Tree. See O Antiphons—December 17-23 for more information.

Advent 2022 is 28 days, so all the potential Jesse Tree figures are included this year. The table below has asterisks next to the names that could be combined in other shorter Advents.

There is no set program for the Jesse Tree done as an Advent devotion. It can be as simple as adding the Jesse Tree figure and the short Scripture quote to personal prayer and meditation or it can be more elaborate with a "tree" with symbols made into ornaments, a prayer service that includes reading a short Scripture quote. It can be a personal, family, or even school or larger community devotion. There is a Jesse Tree Prayer Service that could be a model for your own family Jesse Tree devotion.

For further reading and meditation, there are suggested Scripture readings and links to sections in the Catechism of the Catholic Church that are related to each Jesse Tree figure.

For further information regarding the Jesse Tree, see the posts by Jennifer Gregory Miller:

In addition, there are two extra pages that could be substituted: