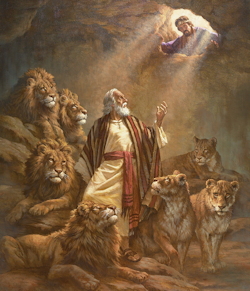 Then King Darius wrote to the nations and peoples of every language, wherever they dwell on the earth: “May your peace abound! I decree that throughout my royal domain the God of Daniel is to be reverenced and feared: “For he is the living God, enduring forever whose kingdom shall not be destroyed, whose dominion shall be without end, A savior and deliverer, working signs and wonders in heaven and on earth, who saved Daniel from the lions’ power." (Daniel 6:25-28)

Daniel is another one of the prophets. He was a young man when he was deported to Babylon in 605 B.C. before the destruction of the Temple. He was placed in the palace of King Nebuchadnezzar. Similar to Joseph, he interpreted kings' dreams and writing on the wall and was placed in a high position in court. He also saved Susanna from false accusations of adultery, and twice thrown into the lions' den and survived by God's mercy.

Some of the visions Daniel had depicted the triumph of the Son of Man in his eternal Messianic Kingdom. Parts of the visions in the Book of Daniel laid the foundations of understanding the Resurrection and Ascension and are also applied to Parousia, oor the Second Coming.