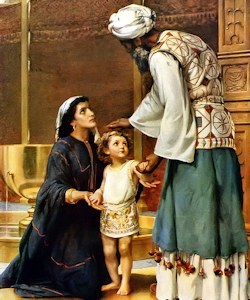 When Samuel went to sleep in his place, the LORD came and stood there, calling out as before: Samuel, Samuel! Samuel answered, “Speak, for your servant is listening.” (1 Samuel 3:9b-10)

The Prophet Samuel's parents were childless. Hannah, his mother, prayed for years for a child. God answered her prayers, and she offered her son Samuel to the service of God in the Temple under Eli, the High Priest.

Samuel was a young boy living in the Temple, sleeping at night near the Ark of the Covenant. In Samuel 3: 1-18 we read of Samuel's calling by God, although he did not recognize the voice yet. But after being called twice and going to Eli, Eli instructed him to answer "Speak, for your servant is listening” if the voice called him again. Samuel did, and God responded, giving Samuel his vocation.

Samuel was the last Judge of Israel. Although God did not want Israel to have a King, the people of Israel insisted. God revealed to Samuel that Saul would be the first King of Israel. Samuel's role then became as a seer and prophet.

Saul was not a good king, nor faithful to God. God helped Samuel find David among Jesse's sons and anoint him as the King of Israel, eventually replacing Saul.

The horn with oil represents Samuel answering God's call to anoint David as King of Israel.