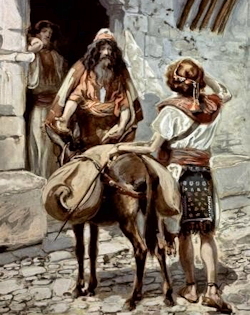 Then Samuel asked Jesse, “Are these all the sons you have?” Jesse replied, “There is still the youngest, but he is tending the sheep.” Samuel said to Jesse, “Send for him; we will not sit down to eat until he arrives here.” Jesse had the young man brought to them. He was ruddy, a youth with beautiful eyes, and good looking. The LORD said: There—anoint him, for this is the one! (1 Sam 16:11-12)

There shall come forth a shoot from the stump of Jesse and a branch shall grow out of his roots. (Isaiah 11:1)

The crimson robe is a symbol of royalty and is used for Jesse because he was the father of King David. Jesse was the ancestor of many kings, most importantly the King of Kings, Jesus Christ.

The Jesse Tree is actually named after Jesse, the father of David. The inspiration is from medieval religious art and stained-glass representations of the genealogy of Christ on earth. The symbol often used is a tree with many branches, with main characters of the genealogy or story of the Redemption depicted on each branch. Christ is usually at the summit, and Jesse is the root of the tree.