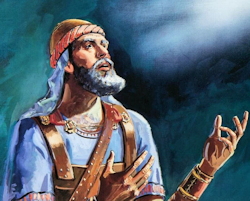 So the people shouted, and the trumpets were blown. As soon as the people heard the sound of the trumpet, the people raised a great shout, and the wall fell down flat, so that the people went up into the city, every man straight before him, and they took the city. (Joshua 6:20)

Joshua was the son of Nun and belonged to the tribe of Ephraim. He was the military leader and hero for Israel during the Exodus. Moses chose Joshua to be his successor and lead the Israelites out of Egypt and into Canaan. Joshua succeeded in entering the Promised Land. The walls of Jericho fell without any fighting. His symbol of the sword is for his military leadership and the trumpet is the instrument that was blown after three days of marching around Jericho to signal the walls to come down.

Joshua is often referred to as a "Second Moses," as many of the things he did mirrored Moses, including miraculously crossing a body of water. He also had the role of as being covenant mediator with God and Israel as Moses had been.