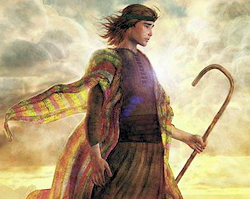 So when Joseph came to his brothers, they stripped him of his robe, the long robe with sleeves that he wore; and they took him and cast him into a pit. (Genesis 37:23-24a)

Joseph was the eleventh son of Jacob and the first born son of Rachel. Joseph's brothers were furious that their father favored their younger brother above all of them. When Jacob gave Joseph an expensive, long-sleeved coat (translated in the Septuagint as a "coat of many colors"), they were jealous and conspired against him. Long sleeves would have been worn by rich people who did not do manual labor, as the sleeves would get in the way.

Like Christ, Joseph was sold for silver, but the hand of God led him to become a leader of the nation of Egypt. Later, his brothers, leaders of the Chosen People after their father Jacob, came to Egypt and settled under his rule. The many-colored or long-sleeved coat has become the symbol of Joseph since it was so instrumental in his life.

Catechism of the Catholic Church