Monday of the Fourth Week of Advent 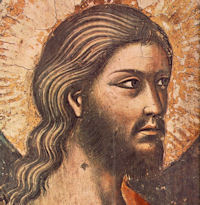 O God, eternal majesty, whose ineffable Word the immaculate Virgin received through the message of an Angel and so became the dwelling-place of divinity, filled with the light of the Holy Spirit, grant, we pray, that by her example we may in humility hold fast to your will. Through our Lord Jesus Christ, your Son, who lives and reigns with you in the unity of the Holy Spirit, one God, for ever and ever.

Today is the fourth of the O Antiphons, O Clavis David (O Key of David). O sublime majesty of the coming Redeemer! To Him has been delivered the key, the government of the house of David (Is 22:22). Boundless is His power over the graces and privileges of the Church, over the souls and hearts and the wills of men. He holds the destiny of the Church in the palm of His hand. He is Master of the storms that arise to destroy the Church and the souls committed to her. He is capable of dealing with the false principles and the errors that threaten her doctrines. He has overcome the devil and his associates, the world, the flesh and its tribulations. To Him all power is given (Matt. 28:18). "He shall open and none shall shut" (Is 22:22). Against the power that is His all other forces are powerless. The destiny of souls and the government of the Church are placed in His hand. He is the Lord of all. O Key of David, I believe in Thy power; and in the many difficult situations that confront the Church and my own soul, I place my trust in Thee.

Included in today's Roman Martyrology is St. Dominic of Silos, an abbot who lived in Spain in the 11th century.

Those following the Jesse Tree can continue through Christmas Eve, and also use symbols based on the “O” Antiphons (see Jesse Tree Instructions).

"Come, lead the captives from their prison." With the key of His almighty power, the Redeemer has opened the prison in which poor, sinful man was languishing in darkness and in the shadow of death.

Key of David, come and deliver the captives from their prison. The Church wishes that by the practice of virtue we should free ourselves from sin and unfaithfulness. She asks God that He may spare us from punishment, deliver us from His wrath, from an evil death, and from hell. The Church prays that God may free us from a heart that clings to the world, from a spirit that is pleased with worldliness, from a human respect that degrades us. She urges us to return kindness and affection for scorn, love and compassion for persecution. Our Holy Mother the Church prays that we may be delivered from ourselves, from our self-love, and from all our secret sins. She prays that God may detach our hearts from all that can bind them to earth, for he who has been freed from the things of the earth is free with the freedom of Christ.

Key of David, come and deliver the captives from their prison. By Thy coming free us from all that separates us from God. Bring us freedom and redemption; incline us to surrender ourselves completely to God. So all pray for each, and each for all.

--Excerpted from The Light of the World by Benedict Baur, O.S.B. 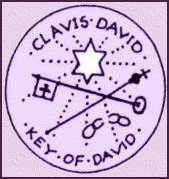 Come, and bring forth the captive from his prison.

O Key of David, and Scepter of the House of Israel, who opens and no man shuts, who shuts and no man opens; Come and bring forth the captive from his prison, he who sits in darkness and in the shadow of death.

The key is the emblem of authority and power. Christ is the Key of the House of David who opens to us the full meaning of the scriptural prophecies, and reopens for all mankind the gate of Heaven. 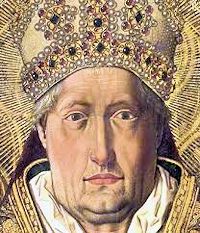 Dominic reformed the abbey, built the cloisters in Romanesque style, and started a scriptorium that became famous throughout the region. One of the most beloved saints in Spain, Dominic also rescued Christian slaves from the Moors.