JGM Note—Just a little reminder that December 17 begins the O Antiphons, my favorite part of Advent!

[This entry was originally written in December of 2013; in December 2014, I wrote a more comprehensive essay: Rejoice, the Lord is Near! Gaudete Sunday, Ember Days and O Antiphons.]

Although not highlighted on most calendars, I consider December 17 as a red letter day. This date marks the second part of Advent, the beginning of the O Antiphons. The O Antiphons are seven precious jewels of our Catholic Liturgy, counting down the last seven days before Christmas with building anticipation. Because each antiphon begins with an “O” this group of antiphons are called O Antiphons.

Dating back to the fourth century, these antiphons address Christ with seven magnificent Messianic titles:

that are based on the Old Testament prophecies and types of Christ. Put in reverse order: Emmanuel, Rex, Oriens, Clavis, Radix, Adonai, and Sapienta, the first letters of these Messianic titles spell out the Latin words ERO CRAS, meaning, “Tomorrow, I will come.” The antiphons sum up in excellence the longing of our Redeemer, and we echo the prayers of the Old Testament faithful by also begging Him to “Come!”

I’m very fond of this time of Advent. This is a little “pick-me-up” that helps me refocus on the two-fold coming of Christ at Christmas, as described in the Catechism of the Catholic Church:

524 When the Church celebrates the liturgy of Advent each year, she makes present this ancient expectancy of the Messiah, for by sharing in the long preparation for the Saviour’s first coming, the faithful renew their ardent desire for his second coming.

The outward preparations for Christmas can be distracting, and by this time, I often have lost focus on the true meaning of Advent preparation. Many of my Advent endeavors have not come to fruition. Christmas is in seven days. The O Antiphons beckon me to refocus, relax, and invite Christ to come into my heart.

If we try to make our own the thought of these antiphons on their proper days, letting their ardent aspirations dominate our prayer life, our minds and hearts will surely be more closely attuned to the mind and heart of the Church as she prepares for the coming of her King (With Christ Through the Year, Rev. Bernard Strasser, O.S.B., 1947).

The repeated and urgent “Come!” reminds me of a child’s eager and impatient waiting for Christmas Eve, but the antiphons and their symbolism and meaning are not always easy to relate to children. It doesn’t need to be elaborate, but it is quite helpful to find various ways to present the O Antiphons that touch many of the senses. (There are many creative and crafty ideas on the Internet or books.). Our Jesse Tree ornaments incorporate the O Antiphons for the last seven days of Advent. But no matter how I decide to present the antiphons, my main intention is to unite our family’s prayers with the universal Church and her Liturgy.

Each evening during Vespers (Evening Prayer) in the Church’s Liturgy of the Hours (Divine Office), the corresponding O Antiphon is sung or recited before and after the Magnificat. The O Antiphon is also the Alleluia verse before the Gospel at each Mass. The O Antiphons are also the verses for the ancient hymn O Come, O Come Emmanuel, our family’s favorite Advent hymn.

Our family’s Advent prayers during these last days of Advent include the daily O Antiphon, the Magnificat, and sing the corresponding verse of the O Come Emmanuel.

Adding elements to our meals is another aspect of incorporating the O Antiphons. One way is reviving the old custom of monasteries as Florence Berger described in her Cooking for Christ (National Catholic Rural Life Conference, 1949):

Another old custom which we revived is giving family treats. In the monasteries long years ago, the different monks furnished extra treats on these days before Christ’s birthday. The gardener gave the community some of his finest dried or preserved fruits on December 19 when he called on Christ: “O Root of Jesse, come to deliver us and tarry not.” The cellarer unlocked the best wine or his treat as he called: “O Key of David, come, and come quickly.” Finally, on December 23, the abbot gave his extra gift to the brothers. Expense accounts which are still extant show how generous and extensive a list of foods were used on the abbot’s “O” day.

One of my favorite childhood Advent memories is when our family practiced this tradition. We adjusted according to ages and size of our family, assigning a day to a family member, usually going from the youngest (who had help) to oldest, so that they can provide a special treat for that O Antiphon day. The surprise usually revolved around dinner, but it was never too fancy or nor always a food treat. The best part was leaving it up to the family member to keep it a secret until dinner time (although sometimes Mom and Dad assisted). An alternative or additional idea I have incorporated over the last years is to serve foods that remind the family of the symbolism of the O Antiphons.

The ideas are numerous but all depend on time and energy, especially during this busy time of year. My aim for our domestic church is keep things simple, and for the O Antiphons the basic plan is making sure we incorporate the antiphons in prayer and song. The crafts and foods are helpful, but I will not allow it to create stress upon myself if I can’t include them.

A few years ago I compiled an O Antiphons Prayer Companion to keep all the antiphons, symbols, and prayers together for each day. There are two versions, the first includes an image of art for each day. I keep this displayed in a flip-chart easel near our dining room table. The second is a black and white version to print for each member of the family. 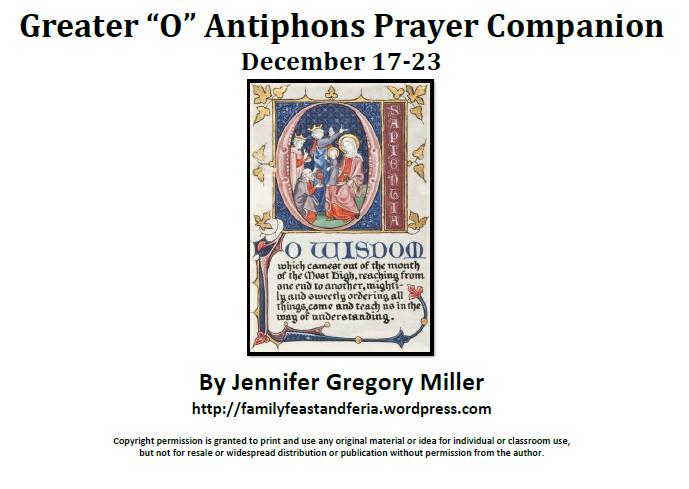 Praying the O Antiphons is such an opportunity to pray with the Universal Church. How wonderful that Mother Church provides such prayers that fit so perfectly with the anticipation of the Advent season. We expectantly pray the O Antiphons together with the whole Church: O Come, Emmanuel!!!

For Further Reading on the O Antiphons, see these other posts by Jennifer Gregory Miller: