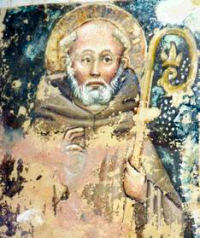 Come, O Lord, to the help of your people, sustained by the intercession of Pope Saint Sylvester, so that, running the course of this present life under your guidance we may happily attain life without end. Through our Lord Jesus Christ, your Son, who lives and reigns with you in the unity of the Holy Spirit, God, for ever and ever.

Previous Calendar: Seventh Day Within the Octave of the Nativity; Commemoration of St. Sylvester I ; Other Titles: New Year's Eve

During his Pontificate were built the great churches founded at Rome by Constantine — the Basilica and baptistery of the Lateran, the Basilica of the Sessorian palace (Santa Croce), the Church of St. Peter in the Vatican, and several cemeterial churches over the graves of martyrs. No doubt St. Sylvester helped towards the construction of these churches. He was a friend of Emperor Constantine, confirmed the first General Council of Nicaea (325), and gave the Church a new discipline for the new era of peace. He might be called the first "peace Pope" after centuries of bloody persecution. He also established the Roman school of singing. On the Via Salaria he built a cemeterial church over the Catacomb of St. Priscilla, and it was in this church that he was buried when he died on December 31, 335.Numerous legends dramatize his life and work, e.g., how he freed Constantine from leprosy by baptism; how he killed a ferocious dragon that was contaminating the air with his poisonous breath. Such legends were meant to portray the effects of baptism and Christianity's triumph over idolatry. For a long time the feast of St. Sylvester was a holyday of obligation. The Divine Office notes: He called the weekdays feria, because for the Christian every day is a "free day" (the term is still in use; thus Monday is feria secunda). --Compiled from Heavenly Friends, Rosalie Marie Levy and The Church's Year of Grace, Pius Parsch