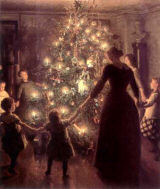 The last day of the year is called "Sylvester" in Europe. This word is derived from the liturgical feast, celebrated on December 31, of St. Sylvester, pope and confessor, who died in the fourth century.

The end of the old and the beginning of the new year was, and still is, observed with popular devotional exercises. Special services are held in many churches on New Year's Eve to thank God for all His favors in the past year and to implore His blessings for the new one.

A distinctive feature of the traditional celebration of "Sylvester" is the feasting and merrymaking during the night, often combined with masquerades, singing, and noisemaking. This is a relic of the pre-Christian reveling in ancient Rome; its original significance was to salute the New Year and to drive the demons away.

The main item of Sylvester drinking is the punch bowl. Today we have quite a variety of punches. The modern form of punch originated in England in the early seventeenth century. It consists of alcohol, water, spice, sugar, fruit essence. The word seems to be an abbreviation of "puncheon," which was the name of the cask from which grog used to be served on English ships. For your celebration, make a bowl of your favorite punch, with alcohol or not, to share with your family and friends.

New Year's Eve: An Hour of Watching
For centuries the beginning of a new year has been the source of many customs and ceremonies in every land. We find the Druids with their boughs of mistletoe, the wassail bowl, the rauchnacht or incense night in Austria, the search for the elbetritch, the Roman celebrations in honor of the two-faced Janus, the etrennes of the Jour de l'An. When the Roman emperors were Christianized, they did not prohibit all the customs which came from pagan times, but an attempt was made to "baptize" them, or at least to avoid any superstitious practices among Christians. 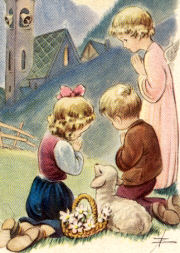 The Church celebrates the octave of the Nativity and the Solemnity of the Mother of God on the first day of the year. As a loving mother, she recognizes that the first day of the civil year is a holiday in every land, and as a consequence has made this day a holyday of obligation, desiring that we bring our first thanksgiving and homage to God. May the New Year cause all men to remember that the precious gift of time which God has given us is to be used according to His divine providence in the attainment of eternity.

New Year's Eve, along with its innocent gaiety, is really a day for serious reflection. It is true that for the Christian the real beginning of the year takes place with the First Sunday in Advent, and the children should be taught to make their annual day of recollection before that Sunday, which celebrates the New Year of grace. However, on the eve of the civil New Year as well the children may join their parents in a holy hour, in prayer and thanksgiving for the gifts and benefits which God has given them in the past year, and pray for necessary graces in the forthcoming civil year.

Hospitality is a hallmark of the evening. Christmas spirit should embrace the aged, the stranger, the poor and the lonely. None should be excluded from the family festivities on New Year's Eve. The Chinese, who are particularly devoted to elderly members of the family, could be imitated in their respect and deference to the aged. Family spirit during this season shows love and kindness to the patriarchs and matriarchs of the family.

A serious note is added to the evening by an "Hour of Watching." The prayer hour should be carefully timed so that it reaches a climax at midnight. There is no better way to conclude the closing of the civil year and the opening of the New Year than by family prayer followed by midnight Mass. There should be contrition and thanksgiving for the past, and a prayer of peace and holiness during the oncoming year. The New Year hour of prayer should contain practically the same themes, concluding with the ringing of the bells and assistance at midnight Mass.

Many parishes offer a midnight Mass and sometimes serve a champagne breakfast afterwards. If no local parish offers an organized holy hour or midnight Mass, the family could assemble a half-hour or hour before midnight and pray together, perhaps a rosary, some meditations read out loud, and conclusion with the Act of Consecration of the Human Race. We are praying for peace and unity in our world, and for our church and civil authorities, and trying to make reparation for all the sins that are especially committed on this night of revelry.

End the Holy Hour and begin the new phase of our life by renewing the act of consecration of the human race to the Sacred Heart of Jesus. This was first made by the great Pope Leo the XIII in 1899 and was intended to be a new "Covenant of Love" between the Heart of the Redeemer and the hearts of men. Let us offer it especially that there may be indeed "One flock and one Shepherd."