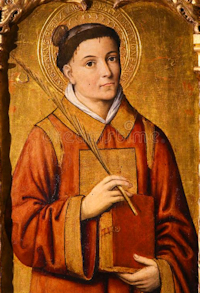 Feast of St. Stephen: Grant, Lord, we pray, that we may imitate what we worship, and so learn to love even our enemies, for we celebrate the heavenly birthday of a man who know how to pray even for his persecutors. Through our Lord Jesus Christ, your Son, who lives and reigns with you in the unity of the Holy Spirit, God, for ever and ever.

The gates of heaven were opened for blessed Stephen, who was found to be first among the number of the Martyrs and therefore is crowned triumphant in heaven.

Blessed is he who comes in the name of the Lord: the Lord is God and has given us light.

Preface III of the Nativity of the Lord:

For through him the holy exchange that restores our life
has shone forth today in splendor:
when our frailty is assumed by your Word
not only does human mortality receive unending honor
not by this wondrous union we, too, are made eternal.And so, in company with the choirs of angels,
we praise you, and with joy we proclaim:

As they were stoning Stephen, he called out: Lord Jesus, receive my spirit.

Today is the Second day in the Octave of Christmas. The Church celebrates the Feast of St. Stephen, the first Christian martyr. Stoned outside Jerusalem, he died praying for his executioners. He was one of the seven deacons who helped the apostles; he was "filled with faith and with the Holy Spirit," and was "full of fortitude." The Church draws a comparison between the disciple and his Master, emphasizing the imitation of Christ even unto the complete gift of self. His name is included in the Roman Canon.

Saint Stephen is the first martyr of the Church, and is the patron of stonemasons, masons, bricklayers, deacons, headaches, and horses. His story comes from the Acts of the Apostles. He is usually pictured in deacon's vestments, holding the symbol of martyrdom, a palm branch. Sometimes he has a stone in his left hand, to indicate his death by stoning. He is depicted in many images wearing a wreath, which refers to the origin of his name, the Greek word Stephanos meaning "wreath."

"If you know what witness means, you understand why God brings St. Stephen, St. John, and the Holy Innocents to the crib in the cave as soon as Christ is born liturgically. To be a witness is to be a martyr. Holy Mother Church wishes us to realize that we were born in baptism to become Christ — He who was the world's outstanding Martyr." —Love Does Such Things, by Rev. M. Raymond, O.C.S.O.