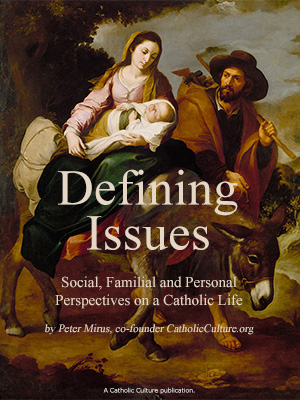 Social, Familial and Personal Perspectives on a Catholic Life

This is a collection of original essays for CatholicCulture.org written between 2004 and 2006. Topics reflect the author's interest in integrating issues and discussions raised by readers on the website into a cohesive vision of Catholic life. The range is impressive, addressing Catholic superheroes, Buddhism, Modernism, spam, parenting, arguing, the Chastisement, Tolkien, clergy and laity, Catholic social teaching, pornography, diplomacy, environmentalism and nearly a score of other topics—always from a fresh and invigorating Catholic perspective. With a sure touch, Peter Mirus discusses many of the subjects that concern today’s Catholics with the frankness and insight which made these essays so popular as they appeared. Peter Mirus is a marketing consultant and CEO of STA Tech Marketing. He holds a B.A. in English from Christendom College. Married with two children, Mirus is also a Director of the non-profit Trinity Communications and of its website, CatholicCulture.org.