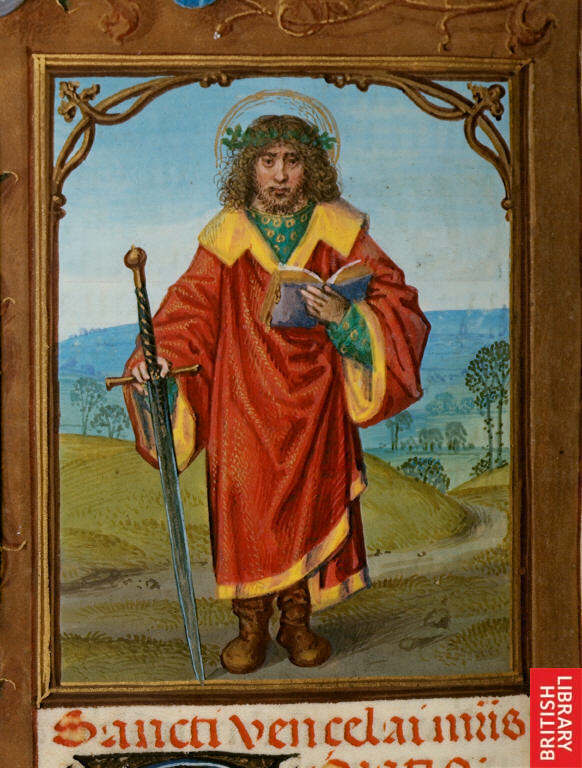 September 28 is the Optional Memorial of St. Wenceslaus (or Wenceslas) and St. Luis Ruiz and Companions. The priest has the option of choosing either saint for celebrating Mass, and lately it seems the Japanese martyrs are chosen in my parish. But our family is very fond of St. Wenceslaus and try to honor him in a small way on his feast in our home.

St. Wenceslaus is popularly referred to Christmastime as “Good King Wenceslaus.” His feast in September is often overlooked, perhaps because the Duke lived so long ago in such turbulent times. Trying to relate to his life and martyrdom is difficult for little ones, let alone grown-ups. His feast also falls during a cluster of very popular saints, the following day being the Feast of the Archangels, two days later St. Therese the Little Flower, then the Guardian Angels (when the feast doesn’t fall on Sunday) and finally St. Francis of Assisi on October 4. These are popular feasts that can overshadow this optional memorial.

Viewing the life and death of St. Wenceslaus can give a little glimpse of life in the Middle Ages in Eastern Europe. The Catholic faith still had not taken firm root. Wenceslaus’ feast is also a prelude to Christmas time. Family feast day celebrations can do “double duty” for busy Catholic moms. The books and activities I use today can also be brought back during the Christmas season, and particularly on the feast of St. Stephen.

I personally loved Wenceslaus and connect Christmas with this saint because of my own personal memories. When St. Pope John Paul II came to Czestochowa, Poland in 1991 for the World Youth Day, one of my sisters and I joined a group pilgrimage to Poland. One of our stops along the way to Poland was the city of Prague, often referred to as the Rome of the East. Some of the treasures of Prague are the Charles River and Charles Bridge, the Infant of Prague statue and the St. Vitus Cathedral, which includes the Chapel of Wenceslaus and houses his relics. One of my favorite impressions at the Cathedral was to see near one of the doors the markings of 19 + C + M + B + 91. Our family has always marked our house every Epiphany, so it was a welcome sight to see the same tradition miles away from home.

But St. Wenceslaus wasn’t one of our family household saints until 2005. Our family had one picture book that had the words to the carol Good King Wenceslaus. My oldest son loved the carol; he wanted to sing it all the time and by Christmas he knew all the words to all the verses—quite a feat considering he was only two at the time. It was quite humorous to listen to a 2-year-old belt out the tune and verses. So I tried to nurture this love by getting additional books with wonderful illustrations and stories to flesh out this saint. I have now found over the years that it has been fruitful to isolate a Christmas carol and delve in a little deeper into our Church’s history, both about St. Wenceslaus and St. Stephen, before the hustle and bustle of Advent and Christmas preparation.

One of my favorite ways to “celebrate” a saint is to have a book or two to read about him/her. We have built quite a collection of books for this saint and they do double duty in the Liturgical Year. We read them around September 28 and during the Christmas season, particularly on the feast of St. Stephen, December 26. My list below is not a comprehensive list; there are many versions of picture books that use the lyrics of the Christmas carol “Good King Wenceslas” (or Wenceslaus) by John Mason Neale as the text. Wenceslaus was not a King, but a Duke, but it doesn’t ruin the storyline. The text was set to the tune of the thirteenth-century air Tempus adest floridum, which celebrated the flowers of spring. Many of the books are out of print, but most are readily available at local libraries.

Dwelling on the Christmas carol Good King Wenceslaus and discussing Wenceslaus’ good works is a way to introduce this saintly Duke of Bohemia to younger children. John Neale wrote the Christmas carol because the feast of St. Stephen, December 26, was traditionally Boxing Day in England, a day when money and gifts were given to poor and servants. Wenceslaus’ good deeds for the poor were perfect examples of Boxing Day, and so a carol was born. As the children get older we can help them understand the history and culture.

The Reality of the Duke of Bohemia and His Times

The difficulty with St. Wenceslaus is his story. It’s not a charming bedtime story for children. The harshness of his reality could be hard for younger ears. He was born around the year 907 in Bohemia, which later became Czechoslovakia, and currently Slovakia and the Czech Republic. Although the Christmas carol refers to Wenceslaus as “King” he was actually the Duke of Bohemia. Saints Cyril and Methodius helped convert his family to Catholicism, but paganism still plagued most of the country of Bohemia, including his mother, who was baptized on her wedding day but not a faithful Christian. 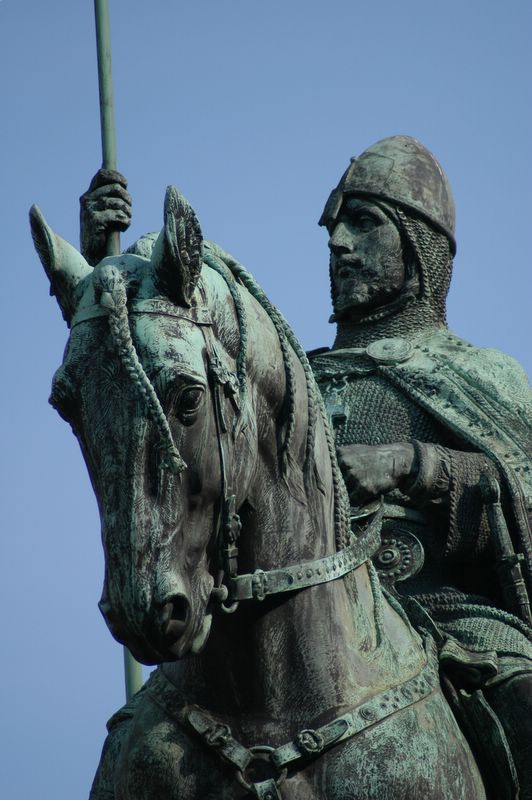 His grandmother, St. Ludmilla, taught Wenceslaus his faith. His mother believed she would gain more power having Wenceslaus renounce his Christianity but he refused. She killed her mother-in-law to try to help her cause, but Wenceslaus stayed true to Catholicism, and his grandmother Ludmilla died a martyr for her faith. Later Wenceslaus’ life became a type of Cain and Abel story. His younger brother Boleslav violently killed Wenceslaus at the door of a church. Wenceslaus died for political reasons, but these reasons concerned the Faith, so he is considered a martyr.

From the blood of martyrs grows the Faith. There is a happy ending, as Boleslav repented and converted and followed in Wenceslaus’ footsteps (just as the page did in the Christmas carol) to bring his country to the fullness of Christianity. Ludmilla and Wenceslaus did not die in vain. And these are two saints to invoke when grandparents are helping raise their grandchildren, particularly in the Faith. And looking at Wenceslaus’ dysfunctional family (family members killing each other), it seems Ludmilla and Wenceslaus would also be ones to invoke for dysfunctions within our families.

(By the way, St. Wenceslaus is also the patron of brewers. Pilsener (or pilsner) is a pale lager that first originated in the city of Pilsen of western Bohemia, which is now the Czech Republic. So for Wenceslaus’ feast, raising a glass of pilsner in the saint’s name seems perfectly fitting. For the adults, of course!)

St. Wenceslaus is often eclipsed by more popular saints around his feast day, but our family has come to appreciate this saint and value the lessons this saint brings, both for his September feast and at Christmastime.

Christmas Carol Picture Books: These are the picture books that use the lyrics of the Christmas carol “Good King Wenceslas“ (or Wenceslaus) by John Mason Neale as the text of the book.

Picture Books: Weaves the Christmas carol into a story.