Memorial of Our Lady of the Rosary: Pour forth, we beseech you, O Lord, your grace into our hearts, that we, to whom the Incarnation of Christ you Son was made known by the message of an Angel, may, through the intercession of the Blessed Virgin Mary, by his Passion and Cross be brought to the glory of his Resurrection. Who lives and reigns with you in the unity of the Holy Spirit, God, for ever and ever.

Hail Mary, full of grace, the Lord is with you. Blessed are you among women and blessed is the fruit of your womb.

Hail, Mary, full of grace, the Lord is with you; blessed are you among women.

Behold, you will conceive in your womb and bear a son, and you shall name him Jesus.

The Memorial of Our Lady of the Rosary was instituted to honor Mary for the Christian victory over the Turks at Lepanto on October 7, 1571. Pope St. Pius V and all Christians had prayed the Rosary for victory. The Rosary, or the Psalter of the Blessed Virgin Mary, is one of the best prayers to Mary, the Mother of God.

Pope Benedict XVI invited all families to pray the Rosary for the intentions of the Pope, the mission of the Church and peace. "It is as if every year Our Lady invited us to rediscover the beauty of this prayer, so simple and profound." The Rosary, a "contemplative and Christocentric prayer, inseparable from the meditation of Sacred Scripture," is "the prayer of the Christian who advances in the pilgrimage of faith, in the following of Jesus, preceded by Mary," said the Pontiff.The Roman Martyrology commemorates St. Mark, pope, who succeeded St. Sylvester and was pope for eight months during Constantine's reign. He zealously continued the great work of Church organization made possible by the period of freedom from persecution due to the Emperor's conversion. He built two churches in Rome, one of which, the titulus Marci, has become the church of St. Mark, and still exists. He died in 336.It is also the commemoration of Saints Sergius and Bacchus, Roman martyrs. Sergius and Bacchus were officers in the army of Emperor Maximian Herculeus. They were held in high esteem by the emperor until he admitted being a Christian. In the year 303 A.D., Sergius was beheaded and Bacchus was beaten to death. 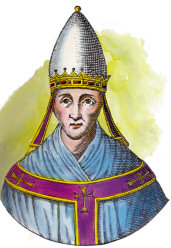 Symbols: Former with cross; white shield with gold cross fleuree; scourges.Things to Do:
Find us on Social Media.
Subscribe to Insights...free!
News, analysis & spirituality by email, twice-weekly from CatholicCulture.org.