The Relevancy of Fatima, One Hundred Years Later

Saturday, May 13, marks the 100th anniversary of the apparitions of Our Lady to three children at Fatima, Portugal. Those who were born after 1989 don’t have as many memories of Fatima devotions. While the historical significance might not be as relevant, there are still some pertinent applications of Our Lady of Fatima for us today.

As Jeff Mirus mentions in his books on Fatima review, we do have to be careful with the balance of private revelation in our lives. Nothing of private revelation is essential to our faith, and authentic revelation should always bring us closer to Christ and His Church. After a hundred years of the Fatima message and devotion, this has generally proven true, although there are a few off-track interpretations of conspiracy and “unrevealed Third Secrets” that have sometimes derailed the heart of the message of Mary.

The May Crowning in our atrium for the children from age 6-12 was this past Tuesday. We had a discussion of what Mary said and did during her life on earth. We decided that her sentence, “Do whatever He tells you” is so important and applies to us. Even in her messages to the children at Fatima, she is not drawing attention to herself, but sending us to her Son.

Fatima evokes many childhood memories of the Blue Army (combating the Red Army of the Soviet Union), First Saturday devotions, special prayers, Pilgrim Virgin statue visits, etc. I know I am very familiar with Benediction of the Blessed Sacrament because of those First Saturdays.

Even in the 70s and 80s there was still the specter of the Soviet Union, with images of the Cold War and the Iron Curtain. We were praying for the conversion of Russia and the end of communism and the conversion of sinners. I would say that the fall of the Berlin Wall on November 9, 1989 changed the urgency of the Fatima message. The USSR imploded. No longer did Russia seem like such a threat.

Yes, the revelations of Fatima that dealt with historical events such as World Wars I and II aren’t as applicable today. But the underlying messages of recognizing the evils of communism and socialism still remain. Many young people don’t view communism as a threat. The past presidential election with the popularity of a socialist candidate is very indicative of this. A century later, are we falling into the same trap of sin?

Combating the evils of communism has changed. We are now no longer seeing it as picking up the red phone or pushing a button for nuclear destruction. The communist influence is not as recognizable. To be put on our guard to be against an idealism is harder than combating an army or government. So the message of Fatima, praying against communism applies. It might not be Russian communism, but still an evil to combat.

A Little Child Shall Lead Them…

I’m so familiar with the story of Fatima that I forget it is a newer story for my sons. When I was younger I really identified with the young children, Jacinta, Francisco and Lucia. They were only 6, 7 and 9 when the Angel of Peace and Our Lady appeared to them. Their lives were forever changed, and they took to heart the exhortations to pray and do penance for the conversion of sinners.

I always thought if these young children could grasp the seriousness of this reality and stick to the sacrifices and prayer life, then I could do it, too. I see over and over how deep and beautiful is the faith of a young child. It is through the example of these three children (two to be saints) that my children can also be inspired to live their faith more deeply.

Mary exhorted the children to pray, do penance, and have devotion to the hearts of Jesus and Mary. The rosary was an integral part of the Marian apparitions at Fatima, Portugal just one century ago. Older readers will remember the Blue Army and First Saturday devotions and praying the rosary for the conversion of sinners. Mary taught the children to pray a prayer after each mystery of the Rosary, “O my Jesus, forgive us our sins, save us from the fires of hell. Lead all souls to heaven, especially those in most need of thy mercy.”.

The message of pray without ceasing still applies today.

Our family prayed a daily rosary and added some of the prayers from Fatima to our daily prayers. These are still beautiful prayers to add, and simple enough to add throughout the day. See the Liturgical Day for the list of prayers taught by Our Lady and the Angel of Peace. 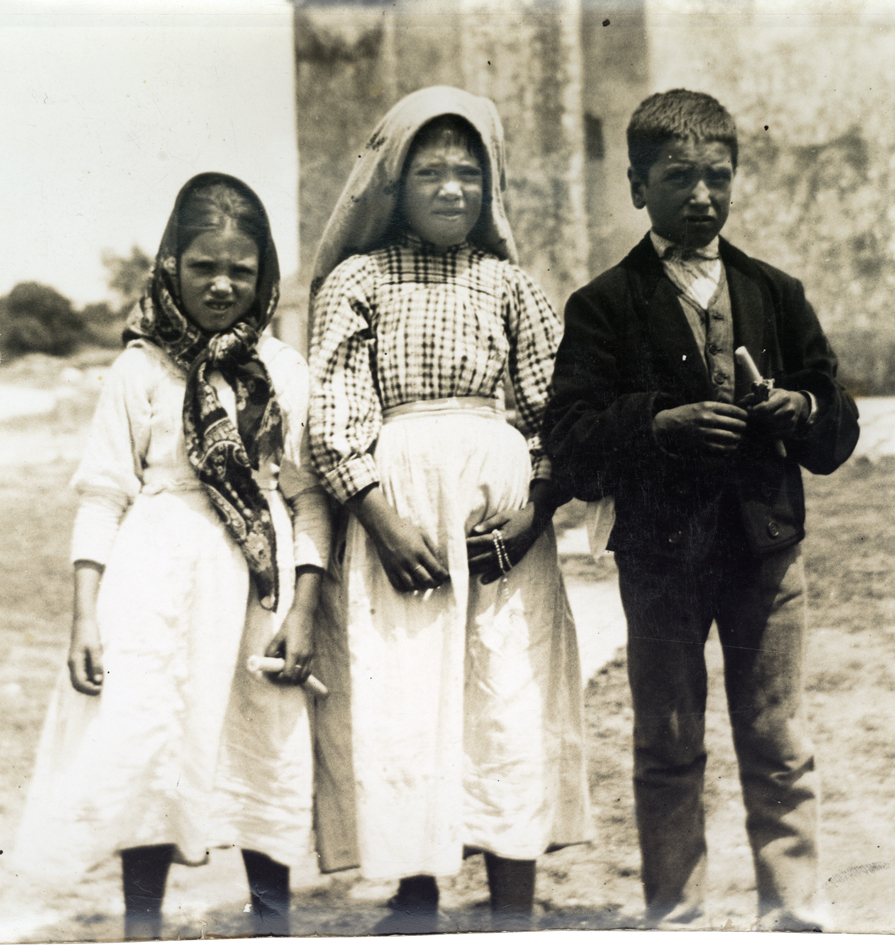 Photos of the three children at Fatima reveal they did not have lives of luxury. They were from poor shepherding families. Yet even in their lack, they found areas to offer penance for others.

A century later most of us are surrounded by comfort, give in to our whims, and do not feel any of those daily hardships of these small Portuguese children. Self-denial and penance are antiquated ideas. This is the “me” and “now” generation. Could we learn from these little saints and Our Lady of Fatima how to take up penance in our comfy lives?

Mercy and the Communion of Saints

Finally, what I’ve been impressed with the message of Mercy through Our Lady of Fatima. The Blessed Virgin Mary appeared as a loving mother, wanting to help those on earth so fewer sinners would go to hell. When Mary originally talked about Russia and World War I, the children had no idea to what she was referring. They had their little lives in their small village of Fatima. How did this apply to their personal lives? They weren’t sure, but they followed Our Lady’s advice. They picked up the urgency and the love Mary had for us and wanted to keep people from sinning and going to hell.

Even though they weren’t as globally connected as we are now, there was a recognition of the connection of all the members of the Church, whether it is referred to as the Mystical Body of Christ, the Communion of Saints, or the True Vine and the Branches. Sin affects all members, whether we actively know the person or not. We are connected. To be able to help and intercede for our brothers and sisters by our prayer and penance as the Church Militant builds and strengthens the Church, and also enriches our connection with our brothers and sisters in Christ.

One hundred years later the face of the world has changed, governments are different, country boundaries have shifted. But human nature hasn’t changed, which makes the messages of Fatima for penance and prayer for conversion of sinners still applicable today. May the new saints (starting tomorrow) Jacinta and Francisco continue to intercede for us sinners. May Our Lady of Fatima pray for us!