O God, whose Son today ascended to the heavens as the Apostles looked on, grant, we pray, that, in accordance with his promise, we may be worthy for him to live with us always on earth, and we with him in heaven. Who lives and reigns with you in the unity of the Holy Spirit, God, for ever and ever.

O God, who made your people partakers in your redemption, grant, we pray, that we may perpetually render thanks for the Resurrection of the Lord. Who lives and reigns with you in the unity of the Holy Spirit, God, for ever and ever.

The ecclesiastical provinces of Boston, Hartford, New York, Newark, Omaha, and Philadelphia have retained the celebration of the Ascension on the proper Thursday, while all other provinces have transferred this solemnity to the Seventh Sunday of Easter, June 1, 2014. If transferred today is observed as an Easter Weekday. The following readings are used: Acts 18:1-8/Jn 16:16-20 (294).

According to the 1962 Missal of Bl. John XXIII the Extraordinary Form of the Roman Rite, today is the feast of St. Mary Magdalen of Pazzi. At the age of ten she consecrated her virginity to Christ, she was a Carmelite famous for her visions. Her motto was "To suffer and not to die." She died in 1607. Her feast in the Ordinary Form of the Roman Rite is celebrated on May 25.

Nominated as the Substitute of the Secretariat of State he worked during the Second World War to find shelter for persecuted Jews and refugees. He was later designated Pro-Secretary of State for the General Affairs of the Church, also because of which he knew and encountered many of the proponents of the ecumenical movement. Appointed as Archbishop of Milan, he worked with great care for the diocese. In 1958, he was elevated to the dignity of a Cardinal of the Holy Roman Church by Pope Saint John XXIII, and following his death was elected on 21 June 1963 to the See of Peter. He immediately continued the work begun by his predecessors, in particular, he brought the Second Vatican Council to its completion and he began many initiatives that showed his solicitude for the Church and for the contemporary world. Among these initiatives we ought to recall his voyages as a pilgrim, undertaken as an apostolic service which served both as a preparation for the unity of Christians and in asserting the importance of fundamental human rights.Furthermore, he exercised his Supreme Magisterium favouring peace, promoting the progress of peoples and the inculturation of the faith, as well as the liturgical reform, approving Rites and prayers at once in line with tradition and with adaptation for a new age. By his authority he promulgated the Calendar, the Missal, the Liturgy of the Hours, the Pontifical and nearly all of the Ritual for the Roman Rite with the purpose of promoting the active participation of the faithful in the Liturgy. At the same time he saw to it that papal celebrations should take on a more simple form. At Castel Gandolfo on 6 August 1978, he gave his spirit back to God and, according to his wishes, he was buried just as he had lived, in a humble manner.— from the Vatican WebsiteThings to Do: 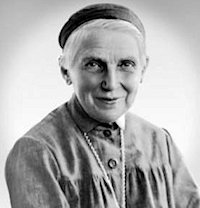 M. Ursula lived in the convent at Krakow for 21 years. Her love for the Lord, her educational talent and sensibility towards the needs of youngsters in the changing social, political and moral conditions of those times put her at the centre of attention. When women earned the right to study in Universities, she succeeded in organising the first boarding-house in Poland for female students where they not only found a safe place to live and study, but also received a solid religious preparation. This passion, together with the blessing of Pope Pio X, gave her the strength to move into the heart of Russia which was hostile towards the Church. When, in civilian dress, she left with another Sister for Petersburg (where religious life was prohibited) she did not know that she was headed towards an unknown destination and that the Holy Spirit would lead her upon roads she had not foreseen. In Petersburg the Mother with the steadily growing community of nuns (soon established as an autonomous structure of the Ursulines) lived secretly, and even though, under constant surveillance by the secret police, they brought forward an intense educational and religious project which was also directed towards the encouragement of relationships between Polish and Russians.When war broke out starts in 1914, M. Ursula had to leave Russia. She headed for Stockholm and during her Scandinavian travels (Sweden, Denmark, Norway) her activity concentrated not only on education, but also on the life of the local Church, on giving aid to the war victims and on ecumenical work. The house where she lived with her nuns became a point of reference for people of different political and religious orientation. Her strong love for her country was the same as her tolerance towards 'diversity' and towards others. Once asked to speak of her political orientation, she promptly answered 'My policy is love'.In 1920 M. Ursula, her sisters and a vast number of orphan children of immigrants returned to Poland. The Apostolic Headquarters transforms its autonomous convent of the 'Ursulines of the Sacred Agonising Heart of Jesus' The spirituality of the congregation is concentrated on the contemplation of the salvific love of Christ and participation in His mission by means of educational projects and service to others, particularly to the suffering, the lonely and the abandoned who were searching for the meaning of life. M. Ursula educated her sisters to love God above everything else and to find God in every human being and in all Creation. She gave a particularly credible testimony to the personal bond with Christ and to being an efficient instrument of both Evangelical and educational influence by means of her smile and serenity of soul. Her humility and capacity to live the ordinary everyday routine as a privileged road towards holiness made her a clear example of this life style. The congregation developed quickly. The communities of the Ursuline nuns in Poland and on the eastern frontiers of the country which were poor, multinational and multi-confessional were established. In 1928 the Generalate was established in Rome along with a boarding-house for girls who were economically less well-off, in order to give them the possibility to come into contact with the spiritual and religious richness of the heart of the Church and of European civilisation. The Sisters began to work in the poor suburbs of Rome. In 1930 the nuns accompanied girls in search of work and established themselves in France. Wherever possible M.Ursula founded educational and instructional work centres. She sent the nuns to Catechise and to work in the poor parts of town. She wrote books and articles for children and youngsters.She initiated and sustained ecclesiastical organisations for children (Eucharistic Movement), for youngsters and for women. She actively participated in the life of the Church and State thus receiving great acknowledgement and decorations from both the State and the Church. When her laborious and not easy life came to an end in Rome on May 29, 1939, people said of her: "She died a saint".John Paul II beatified M. Ursula on June 20, 1983 in Poznan and canonized her on May 18, 2003 at Rome.—© Libreria Editrice Vaticana Things to Do: