Preceding the celebration of the Ascension of Our Lord Jesus Christ on Thursday, the Minor Rogation Days (or Lesser Litanies)* of Monday, Tuesday and Wednesday provide us the opportunity to beseech God's forgiveness for man's transgressions and His blessings for a bountiful harvest. 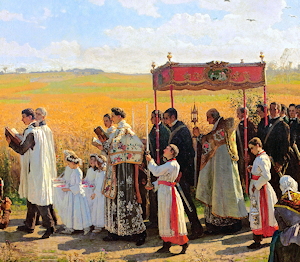 Days of prayer, and formerly also of fasting, instituted by the Church to appease God's anger at man's transgressions, to ask protection in calamities, and to obtain a good and bountiful harvest, known in England as "Gang Days" [from the Anglo-Saxon phrase "to go"] and "Cross Week", and in Germany as Bittage, Bittwoche, Kreuzwoche. The Rogation Days were highly esteemed in England and King Alfred's laws considered a theft committed on these days equal to one committed on Sunday or a higher Church Holy Day. Their celebration continued even to the 13th year of Elizabeth, 1571, when one of the ministers of the Established Church inveighed against the Rogation processions, or Gang Days, of Cross Week. The ceremonial may be found in the Council of Clovesho (Thorpe, Ancient Laws, I, 64; Hefele, Conciliengeschichte, III, 564).

The Rogation Days are the 25th of April, called Major, and the three days before the feast of the Ascension, called Minor. The Major Rogation, which has no connection with the feast of St. Mark (fixed for this date much later) seems to be of very early date and to have been introduced to counteract the ancient Robigalia, on which the heathens held processions and supplications to their gods. St. Gregory the Great (d. 604) regulated the already existing custom. The Minor Rogations were introduced by St. Mamertus, Bishop of Vienne, and were afterwards ordered by the Fifth Council of Orleans, which was held in 511, and then approved by Leo III (795-816). This is asserted by St. Gregory of Tours in Hist. Franc., II, 34, by St. Avitus of Vienne in his Hom. de Rogat. (P.L., LVIII, 563), by Ado of Vienne (P.L., CXXIII, 102), and by the Roman Martyrology. Sassi, in Archiepiscopi Mediolanenses, ascribes their introduction at an earlier date to St. Lazarus. This is also held by the Bollandist Henschen in "cta SS., II, Feb., 522. The liturgical celebration now consists in the procession and the Rogation Mass. For April 25 the Roman Missal gives the rubric: "If the feast of St. Mark is transferred, the procession is not transferred. In the rare case of April 25 being Easter Sunday [as it was in 1886, 1943], the procession is held not on Sunday but on the Tuesday following".

The order to be observed in the procession of the Major and Minor Rogation is given in the Roman Ritual, title X, ch. iv. After the antiphon "Exsurge Domine", the Litany of the Saints is chanted and each verse and response is said twice. After the verse "Sancta Maria" the procession begins to move. If necessary, the litany may be repeated, or some of the Penitential or Gradual Psalms added. For the Minor Rogations the Ceremoniale Episcoporum, book II, ch. xxxii, notes: "Eadem serventur sed aliquid remissius". If the procession is held, the Rogation Mass is obligatory, and no notice is taken of whatever feast may occur, unless only one Mass is said, for then a commemoration is made of the feast. An exception is made in favor of the patron or titular of the church, of whom the Mass is said with a commemoration of the Rogation. The color used in the procession and Mass is violet. The Roman Breviary gives the instruction: "All persons bound to recite the Office, and who are not present at the procession, are bound to recite the Litany, nor can it be anticipated".

—Excerpted from The Catholic Encyclopedia