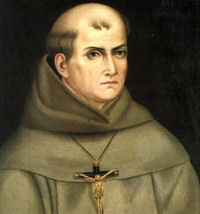 God most high, your servant Junipero Serra brought the gospel of Christ to the peoples of Mexico and California and firmly established the Church among them. By his intercession, and through the example of his apostolic zeal, inspire us to be faithful witnesses of Jesus Christ, who lives and reigns with you and the Holy Spirit, God, for ever and ever. Amen.

Before the reform of the General Roman Calendar today was the feast of the Most Precious Blood of Our Lord Jesus Christ. Precious Blood of our Savior, the life giving spring made ever open by the redeeming Cross! You wash away the stains of the whole world and in the Church, Paradise regained, you bring forth flowers of sanctity. 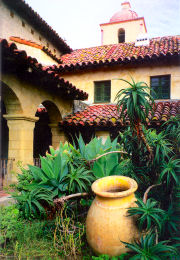 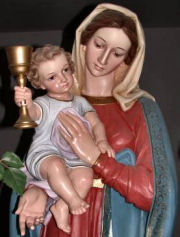 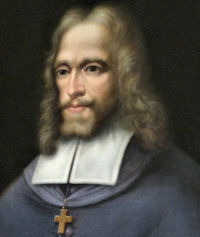 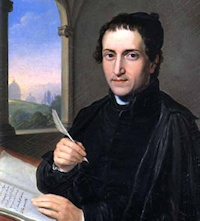 In 1816 he enrolled at the University of Padua, Italy, where he received doctorates in theology and canon law. After his studies he returned to Rovereto to prepare for Holy Orders.In February 1820 he accompanied his sister, Margherita, to Verona where the Marquess Maddalena of Canossa (now Blessed) had founded a religious institute. During the visit Maddalena invited him to found a male religious institute as a twin to her own institute. While the young man politely declined, her invitation in time proved prophetic.Antonio was ordained a priest on 21 April 1821 at Chioggia, Italy. In 1823 he travelled to Rome with the Patriarch of Venice, who arranged an audience for him with Pope Pius VII. In that audience the Pontiff encouraged him to undertake the reform of philosophy.In 1826 he went to Milan to continue his research and publish the results of his philosophical studies. He wrote on many subjects, including the origin of ideas and certitude, the nature of the human soul, ethics, the relationship between Church and State, the philosophy of law, metaphysics, grace, original sin, the sacraments and education.On Ash Wednesday, 20 February 1828, Fr Rosmini withdrew to write the Constitutions of the budding Institute of Charity, in which he incorporated the principle of passivity (to be concerned with one's personal sanctification until God's will manifests itself to undertake some external work of charity) and the principle of impartiality (to free one of any personal preference in assuming a work of charity).To assure himself of God's will in his philosophical and foundational work, Rosmini went to Rome a second time, in November 1828, and there received Pope Leo XII's support. On 15 May 1829 he met with the new Pope, Pius VIII, who confirmed his double mission as philosopher and founder.
During this visit to Rome, Fr Rosmini published "Maxims of Christian Perfection" and "Origin of Ideas", winning the admiration of many scholars.By 1832 the Institute of Charity had spread to Northern Italy and by 1835 it reached England, where the community enjoyed substantial growth. In England the Rosminians are credited with introducing the use of the Roman collar and cassock and the practice of wearing the religious habit in public. They were known for preaching missions, the practice of the Forty Hours, May devotions, the use of the scapular, novena celebrations, public processions and the blessing of throats on the feast of St Blaise.Pope Gregory XVI approved the Constitutions of the Institute of Charity on 20 December 1838. On 25 March 1839 vows were taken by 20 Italian and 6 British priests. On 20 September 1839 Fr Rosmini was appointed provost general for life.This happy period of growth and apostolic success, however, was tempered by opposition to his intellectual and philosophical writings from 1826 until his death.Primarily his "Treatise on Moral Conscience" (1839) led to a sharp, 15-year controversy which required more than one Papal injunction to silence the "Rosminian Question". Another important, controversial work was "The Five Wounds of the Church" (1832).Fr Rosmini found himself wedged between the obligation to renew Catholic philosophy and finding his works on the Index. But his obedience to the Church was admirable: "In everything, I want to base myself on the authority of the Church, and I want the whole world to know that I adhere to this authority alone" (Congregation for the Doctrine of the Faith, "Note on the Force of the Doctrinal Decrees", L'Osservatore Romano English edition [ORE], 25 July 2001, p. 9).To close the issue definitively, the Pontiff submitted all Rosmini's works to examination by the Congregation of the Index. On 3 July 1854, it was decreed: "All the works of Antonio Rosmini-Serbati that have recently been examined are to be dismissed, and this examination in no way detracts from the good name of the author, nor of the religious Society founded by him, nor from his life and singular merits towards the Church" (R. Malone, "Historical Overview of the Rosmini Case", ORE, 25 July 2001, p. 10).Less than a year after this Decree, Fr Antonio Rosmini died on 1 July 1855 at Stresa, Italy, at age 58.—Copyright © Libreria Editrice VaticanaThings to Do:
Find us on Social Media.
Subscribe to Insights...free!
News, analysis & spirituality by email, twice-weekly from CatholicCulture.org.