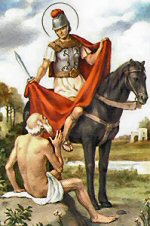 Father, by his life and death Martin of Tours offered you worship and praise. Renew in our hearts the power of your love, so that neither death nor life may separate us from you. Grant this through our Lord Jesus Christ, your Son, who lives and reigns with you and the Holy Spirit, God, for ever and ever. Amen.

According to the 1962 Missal of Bl. John XXIII the Extraordinary Form of the Roman Rite, today is also the commemoration of St. Mennas, an Egyptian soldier and martyr, put to death during Diocletian's reign (c. 295).

St. Martin of Tours
St. Martin was born (c. 316) at Sabaria, a town in Pannonia near the famous Benedictine monastery dedicated to his name. Against the wishes of his parents he associated with Christians and became a catechumen at the age of ten. At fifteen he entered the army and served under the Emperors Constantius and Julian. While in the service he met a poor, naked beggar at the gates of Amiens who asked alms in Christ's Name. Martin had nothing with him except his weapons and soldier's mantle; but he took his sword, cut the latter in two, and gave half to the poor man. During the following night Christ appeared to him clothed with half a mantle and said, "Martin, the catechumen, has clothed Me with this mantle!"

Martin was eighteen years old when he received the sacrament of holy baptism. At the pleading of his superior officer, he remained two years longer in the army. Then, upon requesting dismissal, Julian accused him of cowardice. "With the sign of the Cross," Martin answered, "I shall more certainly break through the ranks of the enemy than if armed with shield and sword." When released he sought out St. Hilary, bishop of Poitiers, and was ordained. Later he was made bishop of Tours. Close to the city he built a monastery (Marmoutier), where with eighty monks he led a most holy life. On one of his numerous visits to the imperial court at Trier, a certain man besought him to help his daughter, "I firmly believe in the Lord that my daughter will be healed through your prayer." Martin healed the girl with consecrated oil. Tetradius, who witnessed this extraordinary manifestation of divine power, asked for baptism. 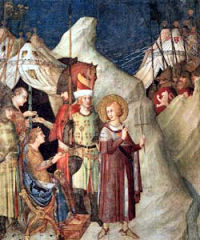 Martin also possessed the gift of discerning spirits. Once the devil appeared to him radiant and clothed in royal apparel, and spoke as if he were Christ. Martin, recognizing the deceit, replied, "The Lord Jesus Christ never prophesied that He would come in purple robes and royal crown." The apparition immediately vanished. Three dead persons he raised to life. While celebrating holy Mass a luminous sphere appeared over his head. He was far advanced in age when he fell into a grievous fever during a visitation at Candes, an outlying parish of his diocese. Unceasingly he begged God to release him from this mortal prison. His disciples, however, implored him with tears, "Father, why are you leaving us? To whom will you entrust the care of your disconsolate children?" Deeply moved, Martin turned to God: "Lord, if I am still necessary for Your people, I will not refuse the labor. Your will be done!"When the bystanders saw that despite his great fever he remained lying on his back, they besought him to change position to alleviate somewhat the pain. But Martin answered, "Brothers, rather let me look toward heaven than to earth so that my soul in its journey home may take a direct flight to the Lord." Shortly before death he saw the evil spirit. "What do you want, horrible beast? You will find nothing in me that's yours!" With those words the aged saint breathed forth his soul on November 11, 397, at the age of eighty-one. —Excerpted from The Church's Year of Grace, Pius ParschSt. Martin's feast, also known as "Martinmas" in Europe arrives in autumn, the beginning of the wine harvest. This was also the time of slaughter of the stock for winter meat. His images are usually depicted with a goose, symbolizing that Martinmas was the last festive meal before Advent, because in France in the Middle Ages, the strict 40 day Advent fast (called Quadragesima Sancti Martini or Forty Days' Fast of Saint Martin's) began the next day. So in past centuries November 11 was celebrated as a thanksgiving day. Thus it was the custom to have "St. Martin's goose" and taste the new wine ("Saint Martin's Wine") on his feast day. A quick spell of warm weather around his feast day (usually termed "Indian Summer" in the US) is known as "St. Martin's Little Summer" in Europe. Patron: Against impoverishment; against poverty; alcoholism; beggars; Burgenland; cavalry; equestrians; France; geese; horse men; horses; hotel-keepers; innkeepers; Mainz, Germany; quartermasters; reformed alcoholics; riders; soldiers; tailors; vintners; wine growers; wine makers.Symbols: Horse; sword and coat cut in halves; goose; scourge; hare; broken images; chair in flames; demon at his feet; globe of fire;
Often Portrayed As: Man on horseback sharing his cloak with beggar; man cutting cloak in half.Things to Do: 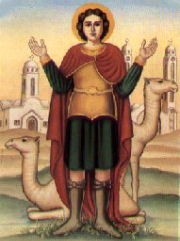 —Excerpted from The Church's Year of Grace, Pius Parsch Patron: Falsely accused people; peddlers; traveling merchants.Symbols: Man with his hands cut off and his eyes torn out; man with two camels; young knight with a halberd, an anachronistic depiction of his time in the Roman army.Things to Do: