Action Alert!
Catholic Culture NEEDS your help!: $38,344 left to match to win a $60K grant. Deadline is Pentecost, June 5th—we are critically behind!

November 11 in the ecclesiastical calendar marks the Memorial of St. Martin of Tours. For modern American readers, this date doesn’t bring to mind too many Catholic traditions in this country. This date was formerly Armistice Day, and is now a federal holiday, Veterans’ Day. Learning about the humble bishop from the 4th century, reminds us of the early origins of Veterans’ Day. St. Martin has a very extensive cult and tradition throughout the centuries in the history of Christendom.

Who Was St. Martin of Tours? 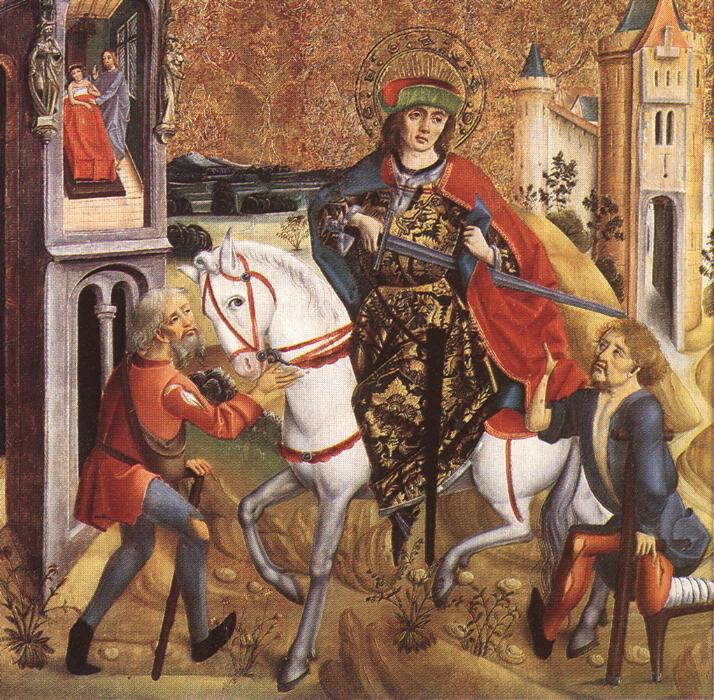 We are blessed to have a biography written by Sulpitius Severus, a contemporary of St. Martin, that provides most of the information on his life. Martin was born either in 316 or 317 A.D. as a Roman citizen in the region of Pannonia, in the village of Sabaria (modern day name Szombathely). Pannonia was part of the Roman Empire, and is present day-Hungary. He joined the Roman military at the age of 15, became a catechumen while he was a soldier, but not baptized until after the famous event where he gave half his cape to a beggar, who later appeared to him as Christ. Martin was became a Christian at age 18 in 335 and left the service the next year.

He then moved to Trier, which was at that time the capital of Gaul in the Roman Empire and the principal imperial residence until the 4th century. St. Hilary of Poitiers guided him spiritually for many years and urged him to be ordained. Martin first agreed only to the exorcism, which is the lowest of the Holy Orders (which is same level as a porter). He felt called to live a life of prayer and began as a hermit outside of Trier, but as many began to follow him, he established the foundations of the Monastery of Ligugé, which is still in operation. From the very beginning of his life as a Christian, Martin was a man of prayer. God used him as an instrument to work many miracles and wonders, including raising people from the dead, healing the sick, expelling demons, and communicating with and controlling nature.

In 368 St. Hilary died. Martin was still resisting ordination to the diaconate when he had a request to come visit a man’s sick and dying wife in Tours. The crowds increased the closer he came to the city and once he reached the square, the vox populi elected him bishop of Tours on July 4, 370. The people recognized him to be a saintly man of prayer who would wisely guide their diocese. Instead of living in a rich bishop’s quarters, he again wanted to remain in solitude and prayer when he could. He founded a hermitage which developed into another monastery, Abbey of Marmoutier, which unfortunately is in ruins since the French Revolution.

St. Martin spent the work of his episcopacy traveling by foot to spread the faith, fight heresy (particularly Arianism) and root out paganism by destroying idols, temples and expelling demons. He died on November 8, 397, and his funeral was November 11.

The fourth century was a time of transition for the Church. The Edict of Milan, issued only three years before Martin’s birth, ended the persecution of Christianity and allowed public worship, but also marked the beginnings of extensive growth. The Church worked on defining doctrine through different councils in response to various heresies that arose during this time. St. Martin in particular fought against Arianism and Priscillianism. In the midst of the battle against the latter, Martin spoke against using civil authority to weigh judgments and sentences. 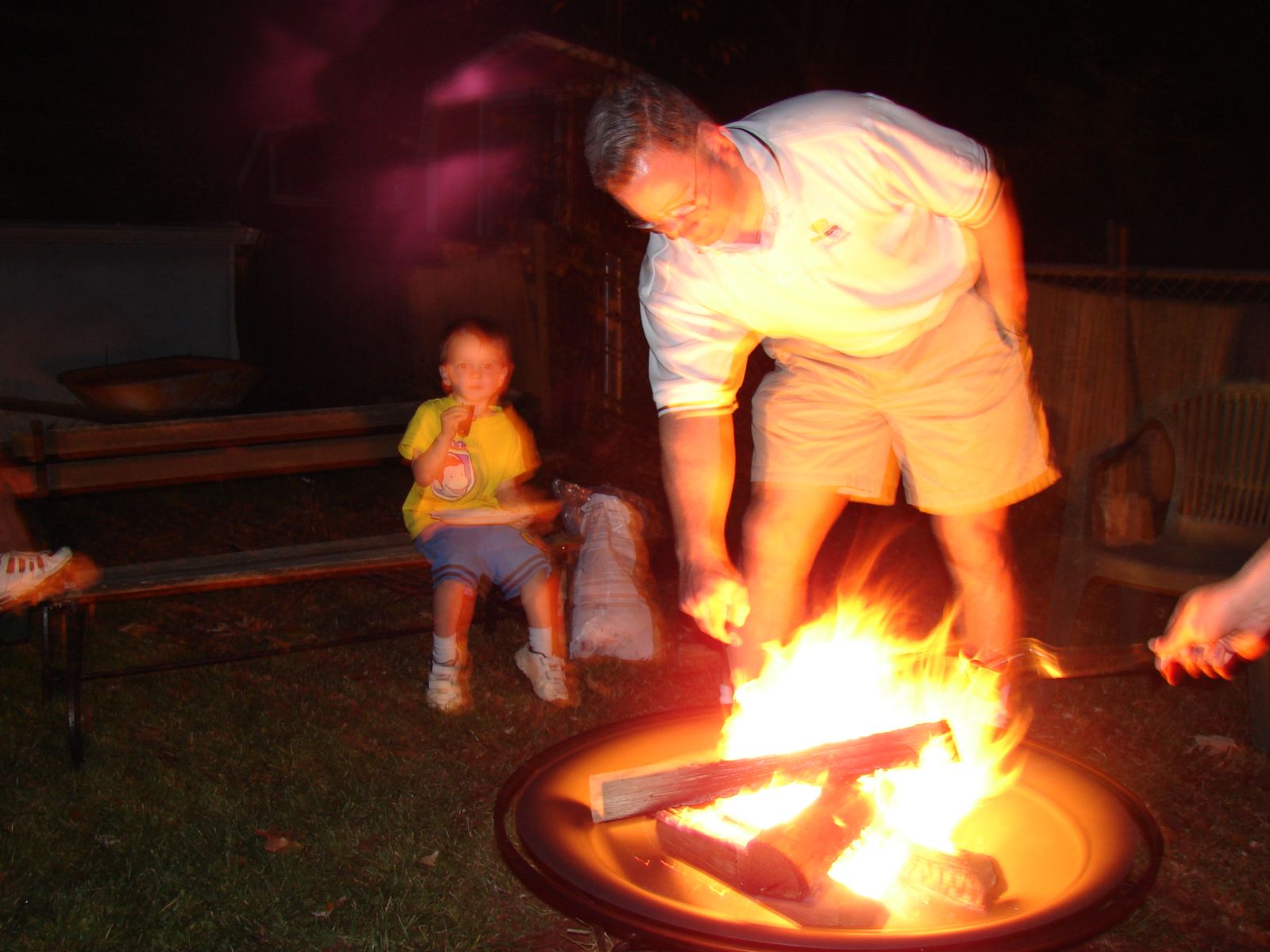 This era marked the birth of Christian Culture:

[M]editation on the Bible and continual prayer sustained by the psalms occasioned a cultural development that would be fully manifest in future centuries, whereas the liturgy that was being elaborated then would give birth as well to musical forms, even to surprising theatrical forms.... But while the pagan culture...was becoming impoverished, a Christian culture was beginning to unfold and starting to flourish even in [this] period. [The fourth] century has been called the golden age of the Fathers of the Church. Indeed, thinkers, writers, and preachers enriched Christian literature as never before with brilliant achievements (Regine Pernoud, Martin of Tours, pp. 58-59).

St. Martin worked tirelessly to bring the Church through this period of the Church’s maturation. His role as bishop was particularly important as the Roman Empire started to splinter and suffered attacks from barbarians and the division of Arian heresy. The Christian faithful looked to him as a leader in all areas because of his example. He lived simply and prayerfully, so he was not influenced by his position or stature.

Evolution of a Feast

After Martin died in 3997, the vox populi again spoke to canonize their beloved and saintly bishop. St. Martin is one of the first non-martyr saints and the first of the class of “confessor” saints. His life illustrated the transition of Christianity from living as a persecuted Christian to living the Faith openily in the world.

Even in his lifetime, St. Martin was well-loved and honored, but after his canonization he became one of the most popular saints in the Western church for centuries. His relics were housed in Tours, and the basilica became a place of pilgrimage, second only to a pilgrimage to St. Peter’s in Rome. The popularity of pilgrimage to his tomb continued until the relics were destroyed by the Huguenots in 1562. A few pieces of the skull and bones were saved from the ashes, but the French Revolution completed the destruction of the basilica. Fortunately, a bell ringer retrieved the relics during the Reign of Terror and a new basilica was built and dedicated in 1925.

St. Martin’s cult expanded over the centuries, and the Church calendar reflected the love of this saint. Over time there were several feasts just for St. Martin: 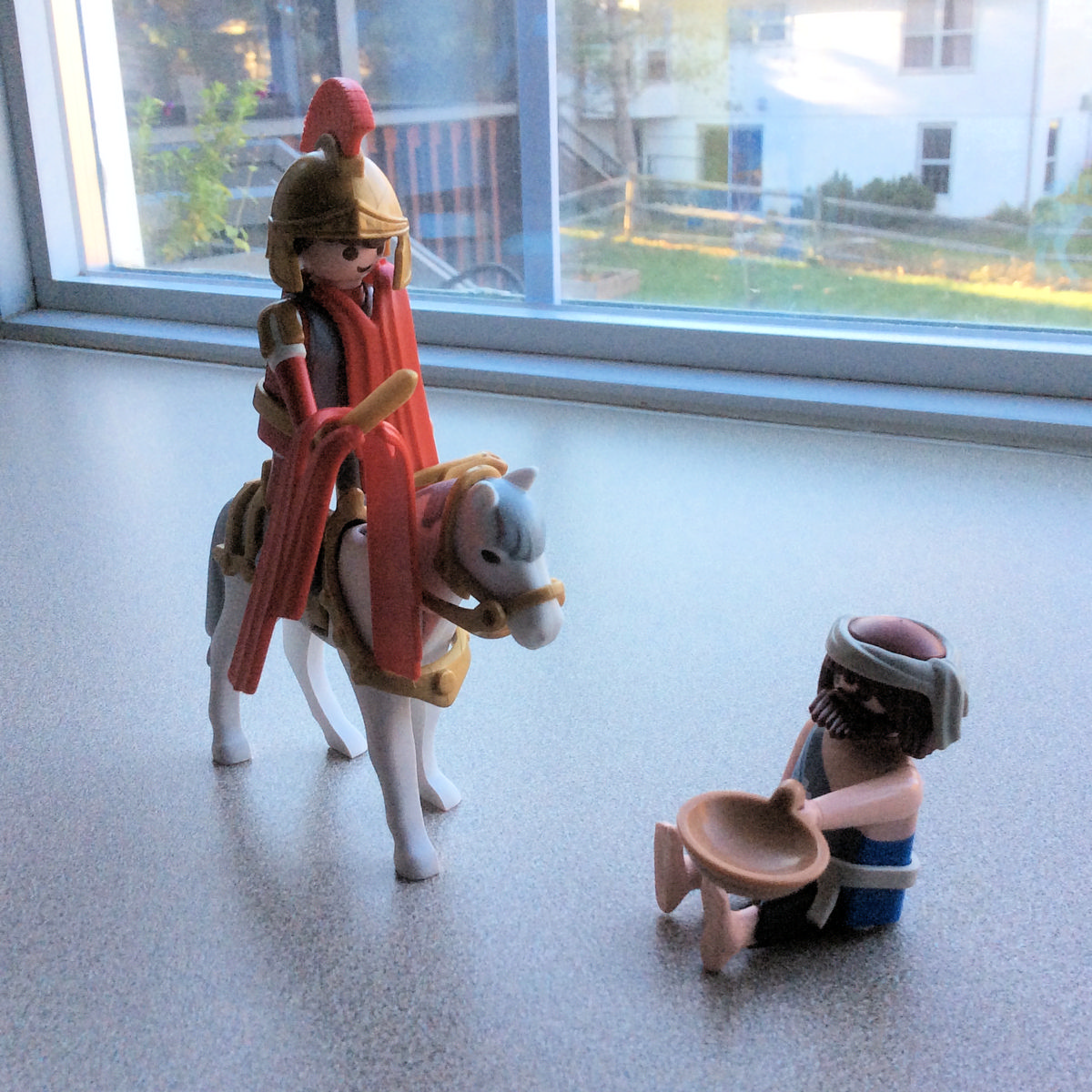 In 490, the bishop of Tours established a six-week preparation for Christmas (what we call Advent) beginning the feast of St. Martin, called Quadragesima Sancti Martini (Forty Days’ Fast of Saint Martin’s). It wasn’t until the 11th century that the Roman four-week Advent was universally adapted, leaving Martinmas as a day of celebration. (There is some conflicting information that indicated St. Martin’s day as the Advent equivalent of Fat Tuesday or Mardi Gras before Lent, but I think it might be a confusion with the feastday on May 12.)

It is puzzling how this saint of France became so popular throughout Europe. Almost every European county developed customs and traditions related to St. Martin, even in some Protestant regions Martinmas customs are still observed. The Diocese of Trier, Germany shared an “Encyclopedia of St. Martin of Tours” that provides many German and French traditions and word derivatives connected with St. Martin, such as St. Martin’s Summer, St. Martin’s Wine, etc. The list is extensive and doesn’t even touch the Polish, Italian, Hungarian, Portugese, Swedish, Belgium, Danish and other culture’s traditions.

His main feast day on November 11 falls after all the harvests and grape gathering is done, marking a seasonal transition and a time people gathered to socialize before winter. This gave rise to thanksgiving celebrations with roast goose and all the trimmings. (It is thought that even the American Thanksgiving was inspired by the St. Martin’s celebrations.)

The most common, and almost universal, harvest and thanksgiving celebration in medieval times was held on the Feast of Saint Martin of Tours (Martinmas) on November 11. It was a holiday in Germany, France, Holland, England, and in central Europe. People first went to Mass and observed the rest of the day with games, dances, parades, and a festive dinner, the main feature of the meal being the traditional roast goose (Martin’s goose). With the goose dinner they drank “Saint Martin’s wine,” which was the first lot of wine made from the grapes of the recent harvest. Martinmas was the festival commemorating filled barns and stocked larders, the actual Thanksgiving Day of the Middle Ages. Even today it is still kept in rural sections of Europe, and dinner on Martin’s Day would be unthinkable without the golden-brown, luscious Martin’s goose (Francis X. Weiser, Handbook of Christian Feasts and Customs).

There are many other special St. Martin foods. In Germany there are various breads, including Weckmann which was blessed bread (not the Eucharist) distributed to those who could not be at the Sacred Meal. These became symbols of an agape meal. Later they were shaped into a bishop. Current versions have a clay pipe, but originally it had a crosier for the sainted bishop.

His feast gave rise to testing the new wine, known as St. Martin’s wine. This tradition still continues with the drinking of the Beaujolais Nouveau.

So many of the traditions center around his early generosity as a Roman soldier cutting his cape in half for the beggar, who in a vision reveals himself to be Jesus. Many parts of Germany celebrate with bonfires and processions with Martinmas lanterns remembering this event in Martin’s life. It’s not clear when these traditions arose or what is the connection with the light with St. Martin. Two possible reasons is he brought the Light of Christ to pagans, or his connection with the early praying of the Psalms by the monks, and lucernarium of Vespers, but the lights could also be unrelated to the saint. 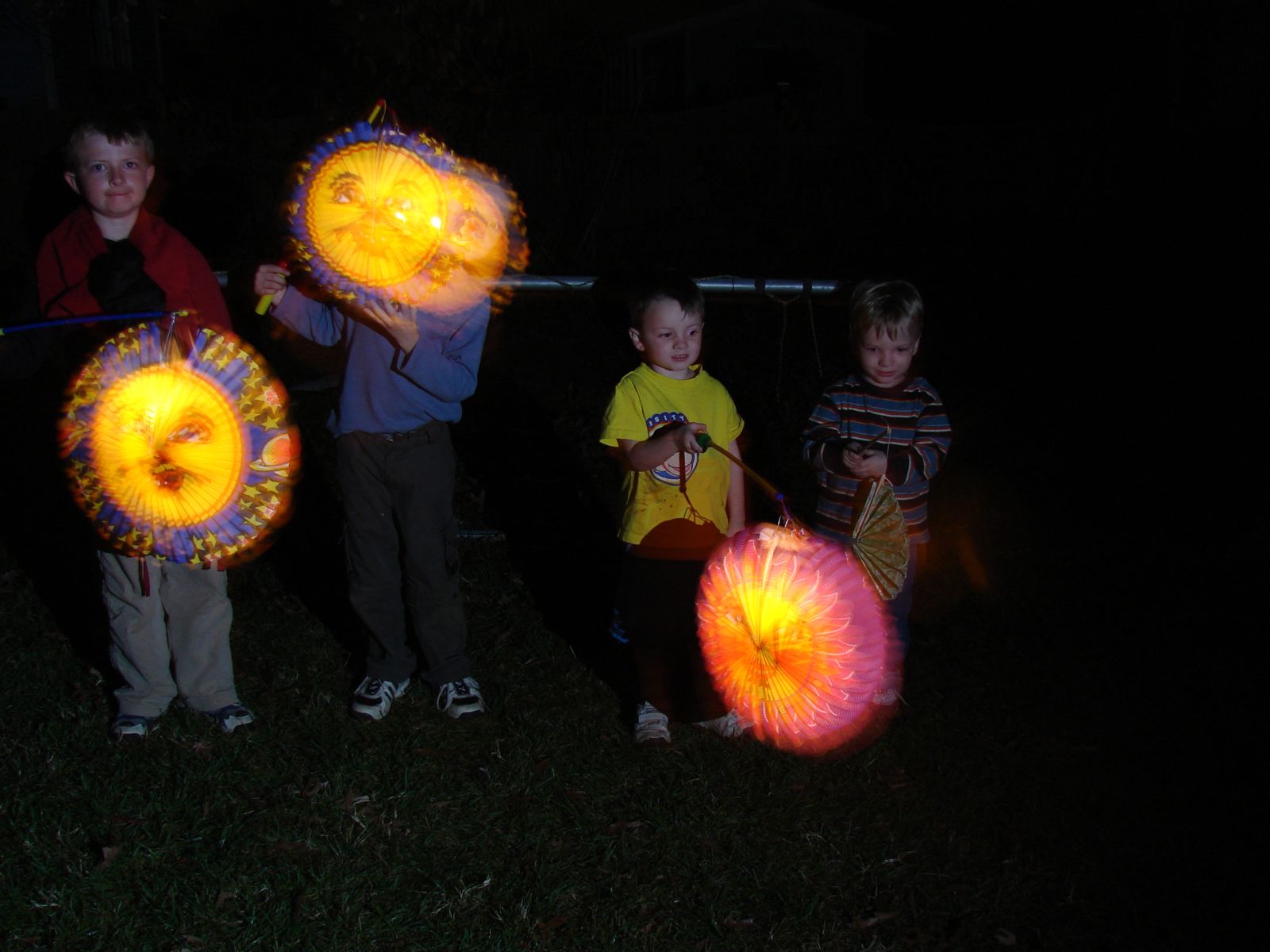 The Directory of Popular Piety and the Liturgy has a wonderful section on devotion to the saints and how we need to balance both the spiritual veneration of the saints and anthropological need to celebrate. It also encourages us to hold up the saint in a proper way:

It is also necessary to represent the figure of the Saint in a correct manner. Bearing in mind the prospect of contemporary society, this presentation should not only contain an account of the legendary events associated with the Saint, or of his thaumaturgic powers, but should also include an evaluation of his significance for the Christian life, the greatness of his sanctity, the effectiveness of his Christian witness, and of the manner in which his particular charism has enriched the Church. (231)

It is keeping this in mind that we discern some of the Martinmas traditions for our family. In the past our family enjoyed bonfires and lantern processions and play-acting the life of St. Martin. A dear friend who lives in Germany shared some authentic German Martinmas items, including a picture book, an electric paper lantern, and a Playmobil St. Martin which we use for our feast day celebrations. The adults have enjoyed social time sipping the Beaujolais Nouveau. But we also balance in sharing the true St. Martin, not just his glory stories so that we can imitate his life and turn to him for intercession.

On Martinmas we celebrate a saint who had a deep impact on the formation and spreading of the Catholic faith in the 4th century, and his influence has continued even after his death. He lived in a time that was difficult to forge Christianity in the public eye, just as we have today. Let us turn to this saint to help us find our balance living and spreading our faith in the modern world.