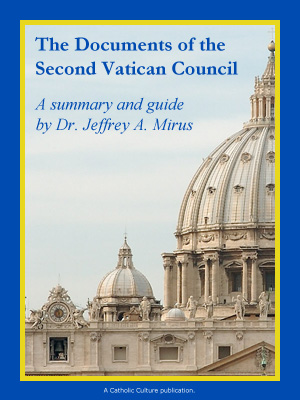 The Documents of Vatican II

A Summary and Guide

A collected series of 34 articles written on the documents of Vatican II between February and October of 2010. From the Introduction: "This is a series of commentaries on the individual documents of Vatican II, in which I intend to focus very briefly on their key ideas, illustrating their depth and beauty through select quotes, and highlighting the concepts that have become controversial, especially in light of the peculiar thing that happened to them between their approval by Pope Paul VI and their implementation. They were implemented, of course, by All the Usual Suspects—that is, by the nominally Catholic theologians, bishops, priests and sisters who abandoned the Faith without leaving the Church in the heady days of late 20th century secularization, and who have used their power to take as many unfortunate souls with them as possible. Now is an excellent time to review the documents precisely because the tenure of All the Usual Suspects in the halls of Catholic influence is finally nearing an end as ignominious as it was slow in coming."