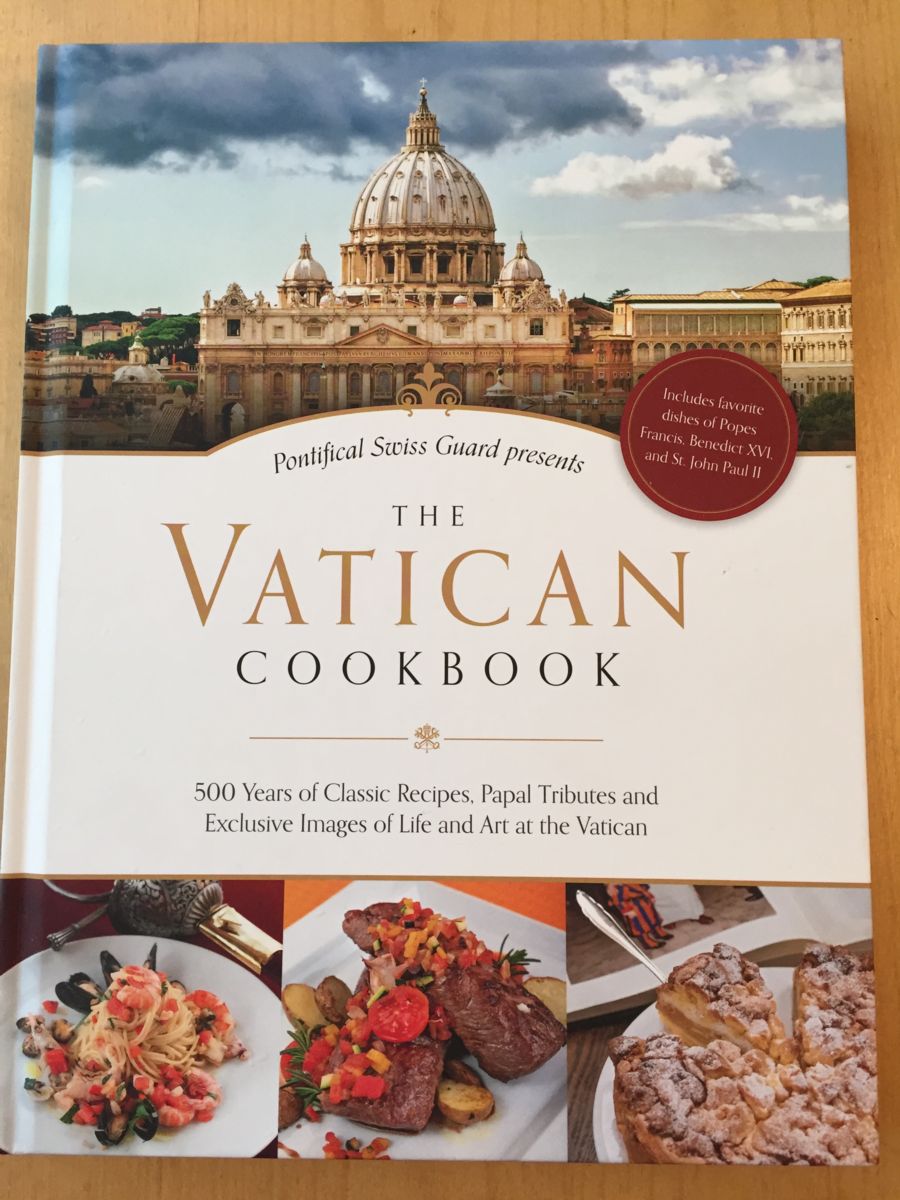 Images of the Pontifical Swiss Guards always seem to invoke intrigue. Eyes are immediately drawn into the colorful and unique uniforms. The Guard’s exclusive role as protector of the Pope and the Vatican City invites lots of questions about their life. The publication of The Vatican Cookbook now provides an intimate glimpse into the life of a Vatican Swiss Guard.

My bookshelves reveal that I have always enjoyed Catholic-themed cookbooks. When the Swiss publication Pontifical Swiss Guard—Buon Appetito was released in 2014, I was eagerly anticipating an English version. Sophia Institute Press printed the North American Edition, and the book does not disappoint! 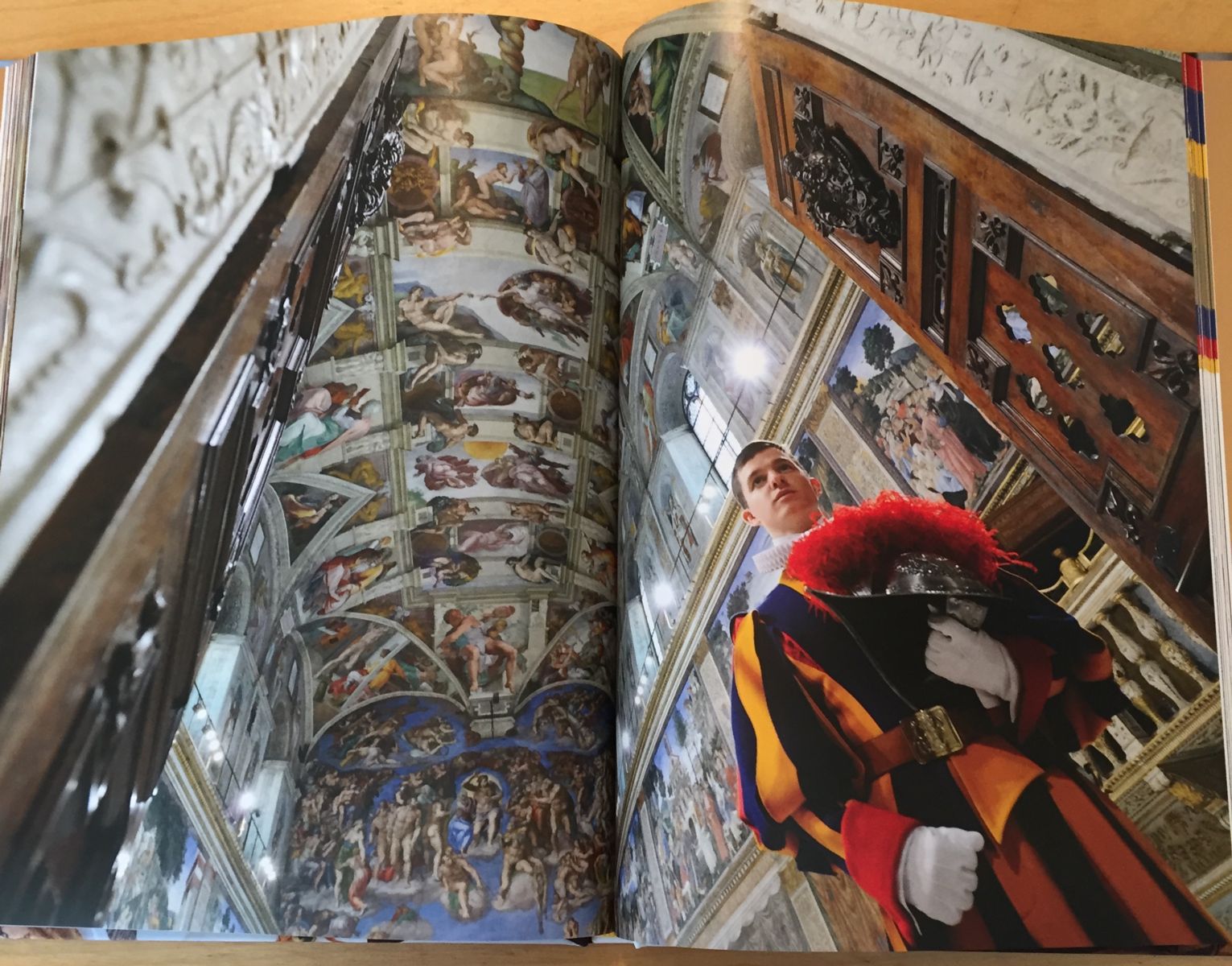 This was a collaborative project: David Geisser, was a chef and already published author of two cookbooks and before he became a member of the Swiss Guard. David played the leading role on this cookbook; Erwin Niederberger was also a former pastry chef before he entered the Swiss Guard. He provided much of the editing and writing of the narratives and historical passages; Daniel Anrig was the former Commander of the Guard and responsible for the Swiss version of this book; Thomas Kelly was the Supervising Editor of Sophia’s North American edition of this book; and the main photography credits go to Katarzyna and Anna Artymiak.

It is a book that has something for everyone. It is a cookbook that includes history, art, the Catholic Faith, culture, and even military tidbits. The photos are breathtaking, giving a glimpse into what a Guard sees on a daily basis. It unfolds the Vatican and Rome through a Swiss Guard’s eyes. We have scenes of the Vatican City, St. Peter’s Basilica, the Sistine Chapel, the Vatican Museums, Castel Gandolfo (which is also considered part of the Vatican City and under the Pontifical Guard’s jurisdiction), and much more. Depicted are the Pope and beautiful treasures and places the Guard is entrusted to protect, but with a more intimate view. 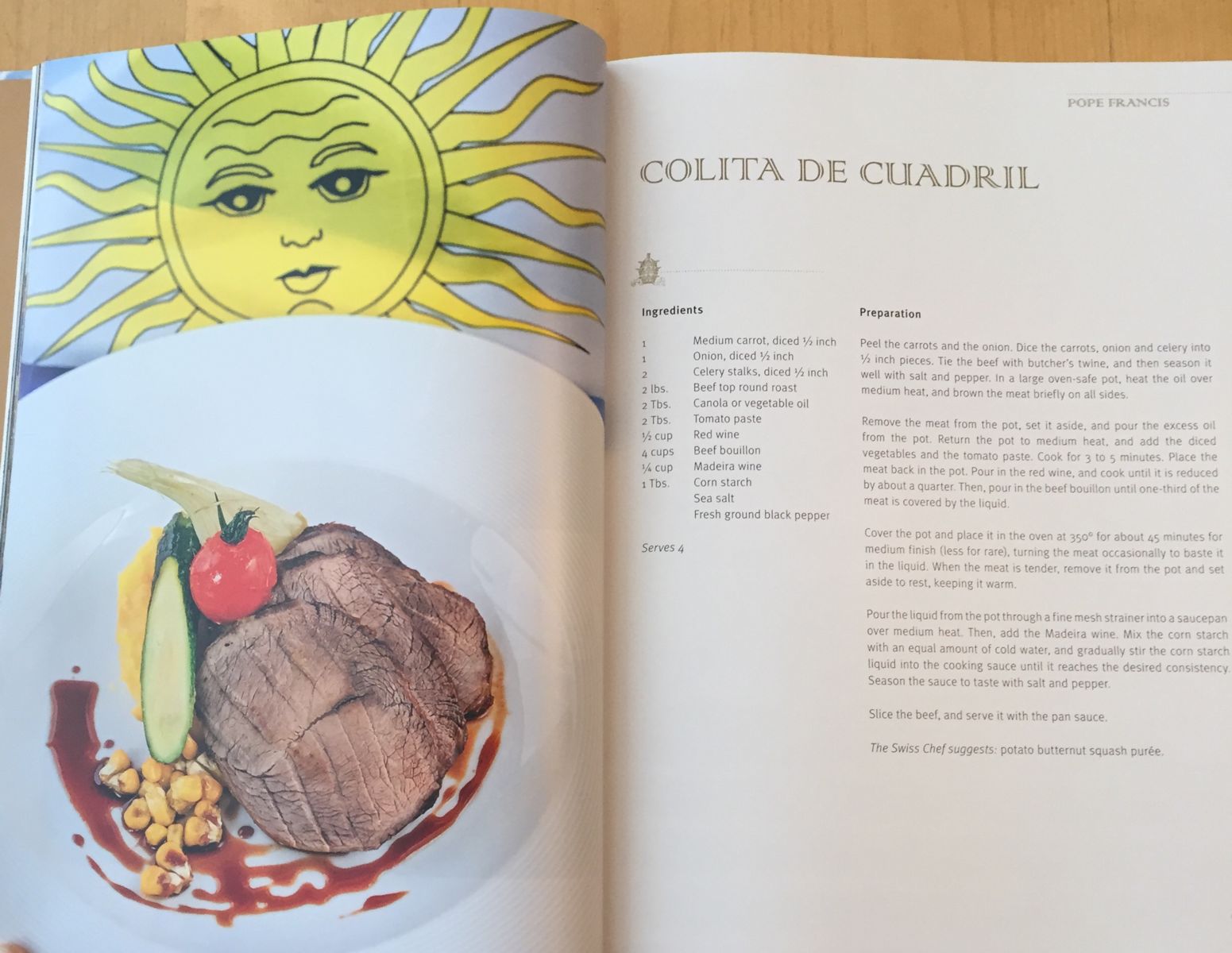 All those unspoken and unanswered questions about the Swiss Guard are finally answered within the pages of this book. 110 members of the Guard live together in Vatican City with their wives and children. The book unfolds a little of the history, their daily duties, their special celebrations and even their off-duty life. One finds out for sure if Michelangelo had anything to do with designing the uniforms!

The Pontifical Swiss Guard is a close-knit group and more like a family, revealing The Vatican Cookbook is more of a family cookbook. The book has an unique organization, reflecting that family outlook. The first sections honor the head of the “family”, the last three popes: Pope Francis with Argentinean recipes of Empanadas on Pepper Salad, Colita de Caudril, Dulce de Leche, Alfajores and Pizza a Caballo; Pope Benedict XVI with a few of his favorite German meals such as Regensburg Sausage Salad and Kirschmichel; and St. Pope John Paul II with Polish recipes including his hospital bed request of pierogies. Next presented are the upper Personnel of the Vatican, then the Officers of the Swiss Guard, with special recipes in tribute of each. The following sections reflect the life of the “family”: the life of the guard, the uniform of the guard, the patron saints, and holidays. The final sections are organized by the places the Guard protects or likes to visit: places in the Vatican, the Vatican Museums, Castel Gandolfo, and favorite Roman restaurants.

The book easily transitions from the coffee table into the kitchen with delicious recipes for all occasions. There are over 70 recipes, with an emphasis on Roman/Italian cuisine. The authors are not the usual Swiss Guard chefs, though. The Congregation of Albertine Sisters Serving the Poor is the religious order from Poland that Pope John Paul II brought to the Vatican in 2002. These sisters are responsible for the cooking and daily maintenance of the kitchen, refectory, and chapel for the Swiss Guards. Although they are Polish, they usually serve the delicious Roman/Italian cuisine that is shared in this book. It seems that the Vatican is a melting pot of so many cultures, but since they are all in Rome, whether they be Swiss, Polish, or Argentinean, they seem to all live that motto, “When in Rome, do what the Romans do.” 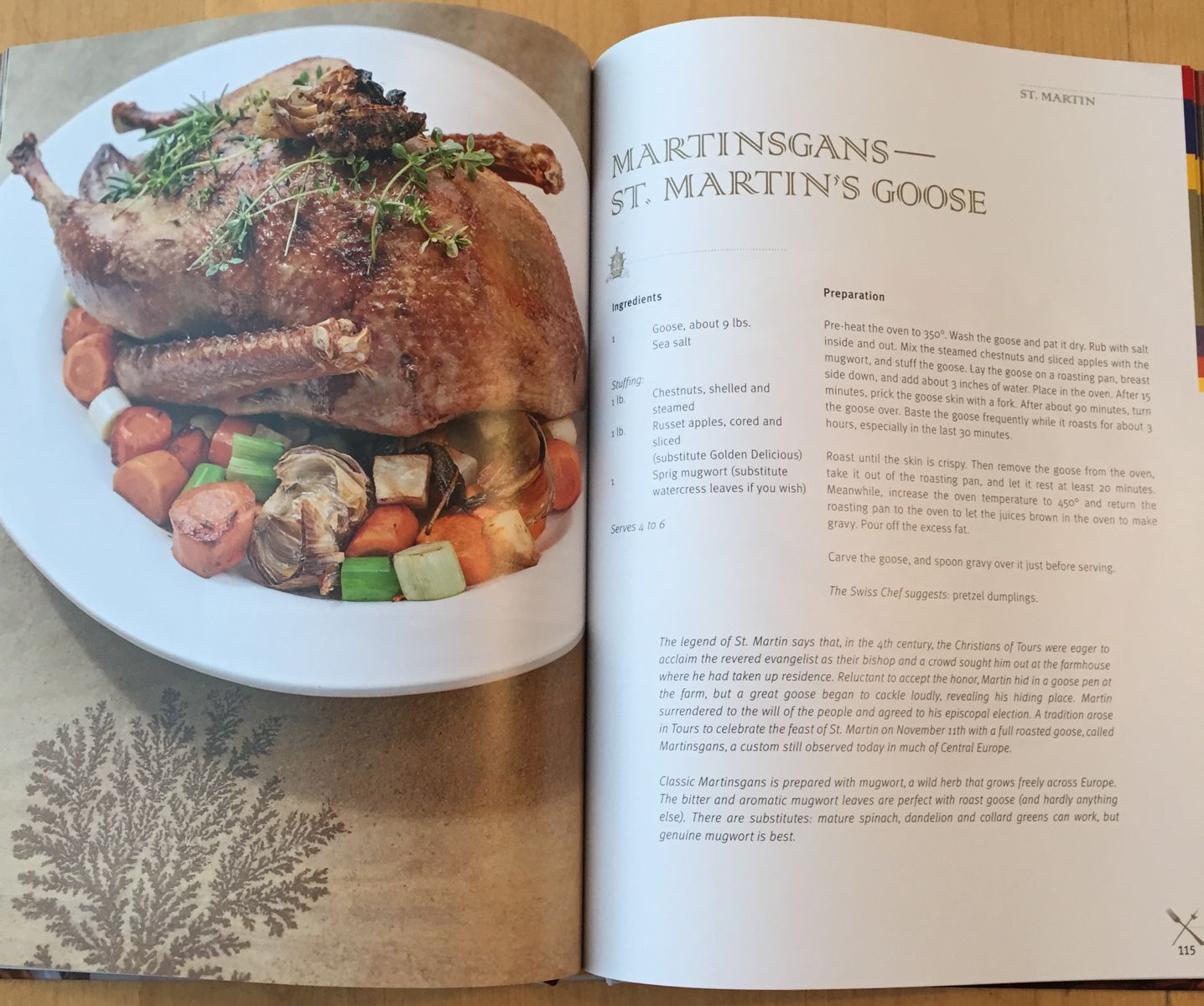 The recipes are varied, delicious and beautifully photographed, with a little something for everyone. They range from pasta dishes as Lasagna all Mamma (although they aren’t sure whose mother it is) and Gnocchi al Vaticano, meat dishes like Filet of Beef Tagliata (for the Sixth of May Swearing-in) and Wiener Schnitzel (for Papa Benedict), to soups like Tomato Soup Florentina and risottos, all the way to desserts such as Chocolate Amaretto Cake and Tiramisu. I personally am always looking for recipes that are dairy and wheat free because of my oldest son’s food allergies, and I found many that were allergen free that I could serve for him.

The translation of the recipes from European measurements and ingredients is handled well. I only found one recipe with an oven setting for 480 degrees, which is an unusual number in American cooking, but that was the only oddity I saw. There are practical suggestions for substitutions for very specific ingredients, such as watercress leaves instead of mugwort for the St. Martin’s Goose.

Some recipes were paired as a whole meal, but other recipes have suggested sides to serve, which are all found in the back section “Basic Recipes” which include sides including dumplings, potatoes and risottos. 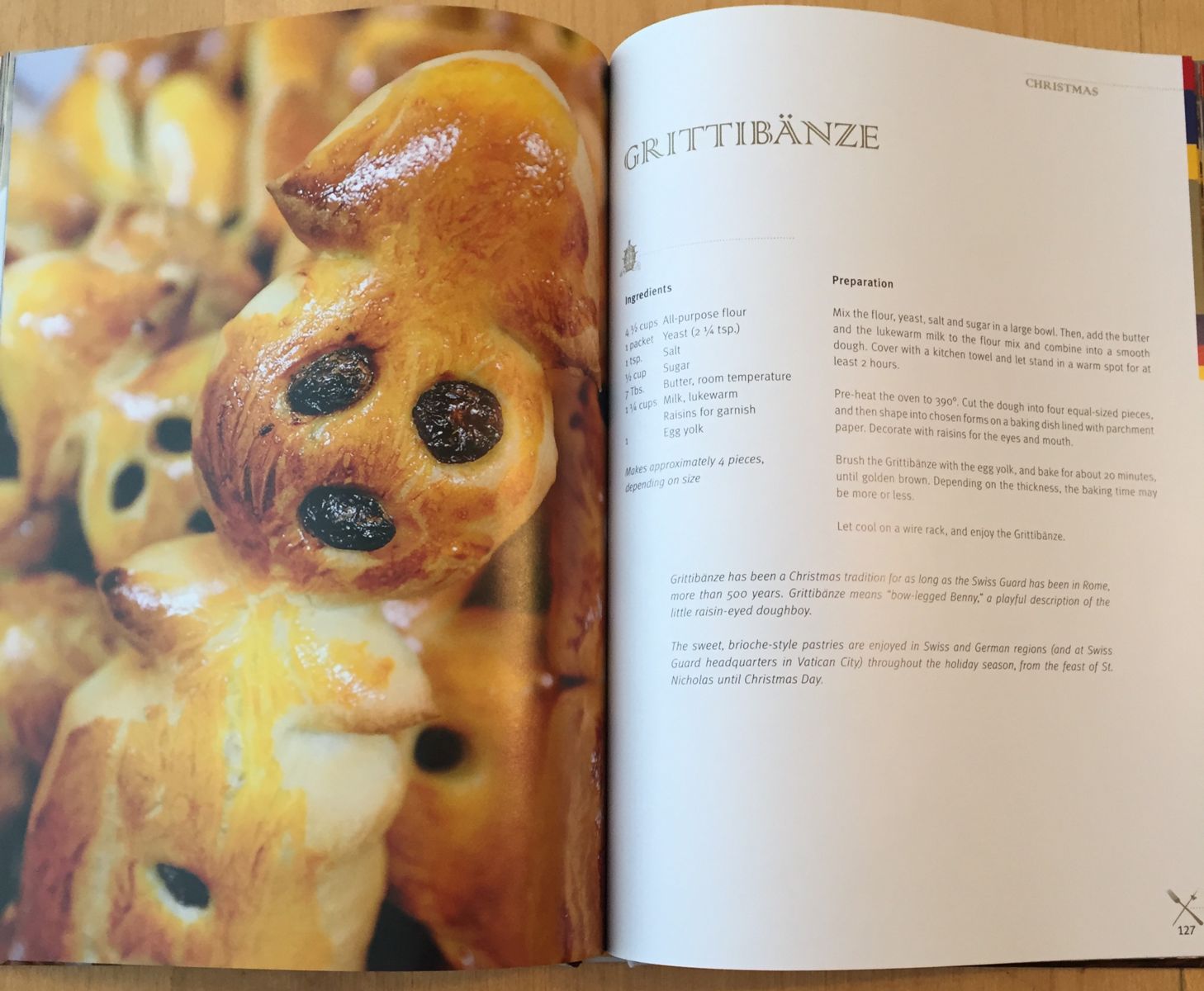 And of course, the cookbook has inspiration for living the Liturgical Year. The patron saints of the Pontifical Guard are St. Martin of Tours and St. Sebastian. St. Nicholas Flüe, the patron saint of Switzerland, was a later addition as one of the patron saints. There are dishes honoring each saint: the traditional Martinsgans—St. Martin’s Goose, Veal Piccata Milanese for St. Sebastian, since he was from Milan, and a modest Swiss Omelet with Herbs for St. Nicholas. The Holidays in the Vatican are almost all holy days of the Church year, so the recipes are wonderful inspiration for liturgical cooking. I especially want to try the Grittibänze, a Swiss raisin-eyed doughboy, the name meaning “bow-legged Benny” which is a treat for St. Nicholas of Myra (December 6) all the way through to Christmas.

The book concludes with a section on prayers of blessings before meals and also an invitation to support the Catholic Relief Services’ “One Human Family, Food For All” campaign.

The Vatican Cookbook is a beautiful book with so much to savor. Within these pages we have an intimate glimpse of the Pontifical Swiss Guard, responsible for guarding the Holy Father and the Vatican. They are not just a military group, but a closeknit group like a family, and part of the bigger family of the Catholic Church. The book brings the reader in a closer connection to the Catholic Church’s heritage of Mother Church and the Pope in Rome. The Vatican Cookbook is more than just a book with Italian recipes; it’s a family cookbook.