The Hope That No One Should Be a Human Slave

The fifteenth of a sixteen part series on human trafficking and Slavery. The author conducted numerous interviews and was granted the use of copyrighted pictures by US Ambassador John R. Miller as well as by two NGO Directors. The plight of human beings at the hands of the slave lords is a deporable situation and this special analysis with the aid of poignant photographs exposes this hidden crime.

Slavery is an issue that affects everyone, everywhere. Thankfully, there are many effective efforts that show promise of helping to end human slavery.

This 16-segment report is hopefully part of those efforts to help people better recognize what slavery is, and understand that it (along with the human trafficking that supports it) can be stopped.

Apathy is the worst enemy of progress against modern slavery. People of faith can make a difference and this is our hope. However, unless people of faith listen and understand this horrific reality, change will not come about. 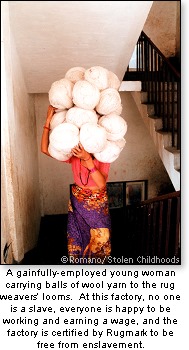 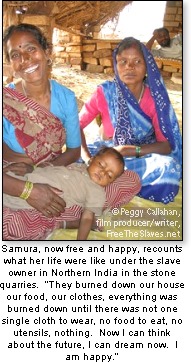 RUGMARK Foundation's Executive Director, Nina Smith, told this writer of the hope she holds for an end to human slavery:

"There are two things that make me hopeful about solutions to the global human slavery problem. First, 10 years ago there was little awareness about the problem. In addition to Rugmark, other organizations have worked to build awareness — the International Labor Rights Fund, Free the Children, Free the Slaves, and others. This has led to more government support for programs on the ground, more media attention, and higher consciousness in the public.

Rugmark addresses a very specific dimension of . . . human slavery: child exploitation in the making of South Asian rugs. Since 1995, Rugmark has succeeded in reducing the number of carpet children from 1 million to 300,000 today. We know that our program works, addressing child labor at the root cause. I have met many individual children who were destined for a lifetime of carpet work. However, Rugmark was able to intervene and give them educational alternatives. Now their childhoods are restored. They are going to school. Moreover, most importantly, they are dreaming about their futures.

Our organization has built momentum. With recent support from the Skoll Foundation and other donors, we are gearing up to launch a consumer awareness campaign. We estimate that within the next decade, we can completely eliminate child exploitation on an industry-wide basis. And once we do that, we can expand and build on the consciousness of human rights concerns in manufacturing to other sectors and other social justice issues."

When this journalist asked Zambian scam victim Given Kachepa (see column titled "Trafficking in Your Own Backyard") if he ever lost hope during his enslavement, he replied: 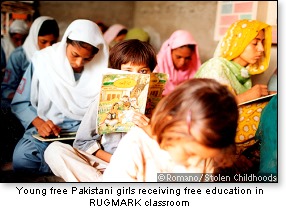 "Yes, I lost hope while I was held captive with human trafficking because my traffickers used tactics that made me feel like I was a worthless individual and told me no one would have any interest in helping me. I felt hopelessness and blamed my self for everything. I felt humiliated as I felt I had nobody to turn to. I felt like a puppet on a string being moved around. Under the circumstances, many might wonder why I did not run away. My traffickers used intimidation tactics, which included mental and psychological abuse to keep us from escaping. Our traffickers said if we run away, no one would help us. They said no person would have any interest in helping us. They said the police would deport us. They kept our passports. We were not allowed to make phone calls without their consent. They said if we disobeyed, they would deport us and inform our families and community that we were disobedient. This would be a shame to our families and the community; as a result, our families and communities would not welcome us back. As a result, I began to think that all American people were self-serving and thought I was never going to be rescued. 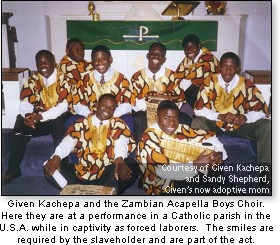 "However," said Given, "while everything I endured was bad, I learned how to forgive. My faith in God is my guiding rod. Losing my mom at age 7 and my dad at age 9 caused me to doubt God's love for me. Why were my parents taken when I was just a kid? Why was I used and exploited? Through all the obstacles, I know He was there for me. Because I have forgiven my traffickers, the burden of my past has been lifted. Without Jesus by my side, I would not have lived through this time. I have moved past the time in my life when I was a victim, and now I am a SURVIVOR of human trafficking."

Ramphal and his family 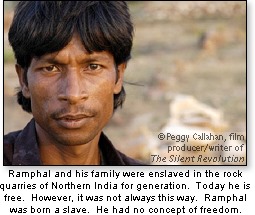 "I am just so happy with this new life that I've got. It gives me so much joy. The fact is now I can control my own mind, my own thoughts, and my own movements. I can't even look back at my earlier existence. If I would move in my house or out of my house, if I want to sit somewhere, get up, if I want to eat, if I want to drink — anything that I wanted to do — I required permission. Each time I think back and look at that life that I led in that village, my heart is filled with grief and with sadness. Freedom of movement was something I was not aware of — I didn't know it existed. And it wasn't just me. My mother, my father, my grandparents had to live through this generation after generation. It was deep in the psyche. You have to understand that whatever slave owners wanted to do, they could do. An 8-year old girl was sitting in her house and the landlords came and just set fire to the house. The girl died." (Source: Peggy Callahan, "The Silent Revolution.")