The fifth of a sixteen part series on human trafficking and Slavery. The author conducted numerous interviews and was granted the use of copyrighted pictures by US Ambassador John R. Miller as well as by two NGO Directors. The plight of human beings at the hands of the slave lords is a deporable situation and this special analysis with the aid of poignant photographs exposes this hidden crime.

Human slavery exists as domestic servitude in thousands of households throughout the world. In most cases, domestic servitude among women and children also includes violence and rape, and takes place in wealthier countries of the Persian Gulf, Asia, France, and the United States. Islam encourages men to marry needy women. A Muslim man can have four wives at a time, and some are treated as slaves or sex objects.

According to Dr. Kevin Bales of FreeTheSlaves.net, the monitoring of working conditions of domestic laborers is difficult because the work takes place hidden in private homes. "According to our survey data, the second highest incidence of forced labor takes place in domestic service in U.S. homes. 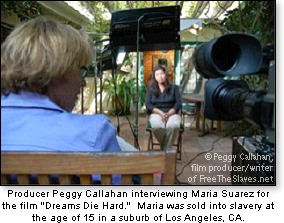 Every year U.S. citizens and foreign nationals living in the U.S. bring thousands of domestic workers into the country, and many of them suffer abuse. Visas normally require that domestic service workers remain with their original employer or face deportation. This requirement tends to discourage workers from reporting abuses. Additionally, some perpetrators are foreign nationals who rely on diplomatic immunity to shield themselves from punishment if their use of forced domestic labor is uncovered."

Many times in India, the man must borrow money to buy a wife. In addition, many times the wife is sold into debt bondage prostitution, in order to pay off the man's marriage debt.

Maria was sold into slavery at the age of 15 in a suburb of Los Angeles. Her owner was an elderly man with a wife. Police would later report that the man was 'an old lecher' who claimed to be a 'brujo' or sorcerer, and that he had a history of buying young girls from Mexico and trading them in when they turned twenty. 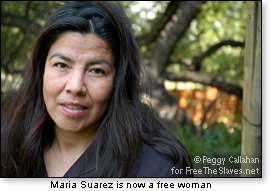 "I was terrorized by him. The house was like, uh, creepy. I didn't wanna stay there. They keep telling me, you stay here. You meet my wife, 'cause he had a wife. And then, I take you to your house tomorrow. I didn't wanna, but between them two, they convinced me. He beat me, raped me, he every day abused me mentally, physically, emotionally, spiritual because I didn't have, I was not in touch with my family, I was not in touch with people because I was afraid of him. So, at the third day is when he told me that he had bought me, that I was his slave, that he paid $200 for me, that I was there to do whatever he want to do to me.

Fear all the time, so I figured God has forgotten me. I used to ask God, why did you forget about me? I'm your child. So, at the third day is when he told me. I was afraid that he was gonna kill my family, that I told the police that I was fine, I was okay. I was living, just living one more day. As long as I can last, either he is going to kill me or I am going to die. A neighbor killed the man and I was arrested for the murder. I was not involved with the murder. I was sentenced to 25 to life. I got my GED and started to be a mentor for younger prisoners."

After more than 22 years wrongfully in prison, Maria was paroled. She does not want to sue anybody. She just wants her name to be cleared of the charge. "I just want a little bit of justice." 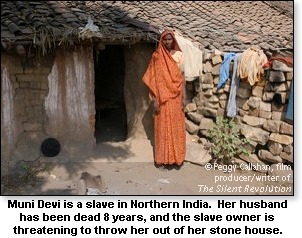 "I am scared. I am too sick to work in the quarries. I have no choices. Where will I go? What will I do? Even if he beats me, abuses me, this is my house. This is my home. This is the only way I can survive because I have no money and that is all I can do." 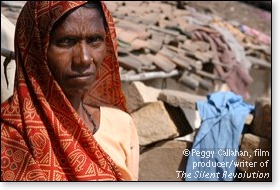