The tenth of a sixteen part series on human trafficking and Slavery. The author conducted numerous interviews and was granted the use of copyrighted pictures by US Ambassador John R. Miller as well as by two NGO Directors. The plight of human beings at the hands of the slave lords is a deporable situation and this special analysis with the aid of poignant photographs exposes this hidden crime.

Human trafficking takes root in industries that already are known to have labor violations — sub-poverty wages, no benefits, no labor relations, and illegal immigrants. Trafficking does not have its own common business model or principle, but will cleverly mimic lawful global industries and cultures.

Traffickers lure poverty-stricken females with false promises of high-paying jobs as house cleaners, housemaids, nannies, cooks, and models. Some pimps or traffickers promise assurances of marriage or get-rich-quick schemes for their families and home villages. Many times, drugs are forcefully induced to facilitate kidnapping. The traffickers typically charge females $7,500 in illicit border-crossing fees. The traffickers or human smugglers, also called "coyotes," slip the victims across borders and then smuggle them by vans to brothel "safe houses." They, however, are anything but "safe." By the time the females realize they have been duped, it is too late for them to escape. Once inside the U.S., the entrapped women and girls are forced into prostitution, pornography, and other forms of sexual exploitation under the most distressing conditions. 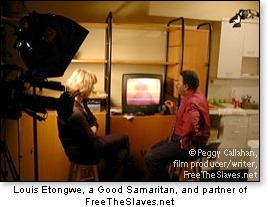 Louis Etongwe helped free domestic slaves in the Washington, D.C., area. "I was horrified because I thought — not in this day and age that there could be some who would trick someone's child into slavery — not like this." Louis points out how even the smallest action to fight slavery can make a big difference.

A telephone worker in Virginia, he first learned about slavery in his own community. A young woman appeared at his cousin's door for Thanksgiving. She had run away from captivity as a housemaid nearby. Louis and his wife offered shelter to the young woman although it placed him at odds within his own Cameroonian community in Virginia. Then he learned of several other Cameroonian girls also held as slaves. Traffickers were tricking young Cameroonian girls into thinking that domestic work within "respectable" families in the U.S. would gain them access to education and a better life. Instead, these young women were forced to work excruciating long hours with no money and no chance for education. Louis established communication with these victims of slavery and arranged for their escape when the master of the household was away. They too were given shelter at Louis' home.

Louis flew to Cameroon, visiting the rescued girls' families. The parents were in shock and still in mourning, as they had been told the girls were dead. The Maryland Attorney General successfully prosecuted the traffickers and Louis continues to make a difference. "Know your neighbors, ask them questions. I have never felt so excited in my life to be doing what I am doing. When you sow a good seed, it has a multiplying effect and that is the most important thing." 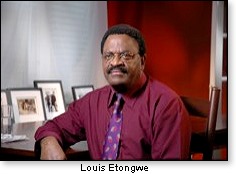 Victims of trafficking are often dumped in unsafe or illegal living and working conditions. Far from home, their personal identities, passports, birth certificates, identification cards, and address books are also taken away. Next, they endure physical abuse, punching, slapping, choking, pulling hair, body kicking, forced sex, and often use of dangerous weapons such as guns or knives. The victims will repeatedly suffer emotional and psychological abuse — i.e., their captors will threaten to hurt their family back home or take their children away, threaten to turn them over to police or immigration officers, destroy their personal property, humiliate and demean them, or force them to commit illegal acts.

Bonded slaves are not allowed to have outside contact with family and friends. They are forbidden to go outside, to make phone calls, write letters, or see the light of day, except perhaps through a dimmed barred window. Many trafficked laborers sleep beside [sometimes chained to] their equipment — their sewing machine or rug loom — or in the fields surrounded by drunken guards with machine guns and machetes. When the slaves become sick and cannot produce anymore, they are simply discarded and thrown away — quite literally.

Once a victim has reached his or her destination, the slaveholder will keep the victim indebted further to pay for the costs of travel transportation, passport, and visa fees. Then the slave enters into "debt bondage." The slave's weekly living expenses are deducted from any small credits that may be applied through his or her labor, leaving the victim always in greater debt. Many times the traffickers or "coyotes" father children of the victims. The slave lord takes the babies from their mothers to be cared for by his own family, thus holding more control over the slave to work harder to earn the baby back.

Remember the horrifying scenes of drug addiction in the movie "The French Connection II"? The same evil fate is perpetrated upon the sex slaves. If the young women try to escape, first they are beaten. Next, crystal meth and cocaine are administered, forcefully the first couple of times, so that feeding the drug addiction becomes more important to the victim than their own freedom. The terrible fear of helplessness and shame for having allowed themselves to be tricked into debt bondage mentally consumes the victims for their lifetime. 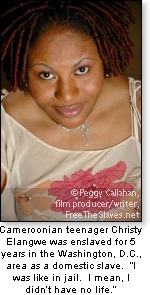 "Human trafficking is so hidden, you don't know who you're fighting — the victims are so scared, they're not going to tell you what's happening to them," said Zambian Given Kachepa, a former victim of a ring that exploited Zambian orphans touring the United States in a boys choir.

Rings of sex traffickers can be found in most major U.S. cities. However, the most vulnerable area for sex trafficking, according to the National Institute of Justice, is the St. Paul and Minneapolis area, with its unusually high activity of strip clubs, homosexual saunas, male and female escort services, girl and boy prostitution rings, and speedy sex shacks called "chicken shacks."

Southwest Florida is also ripe for traffickers. The "coyotes" or traffickers lure victims from Mexico with promise of work in agriculture fields for men or as housemaids or waitresses for girls. Their job titles change drastically once they are released from the crowded transportation vans.

Human slavery can only succeed by the continued failure of government and police officials to maintain law and order. Even in advanced countries, police complicity in illegal profits of enslavement makes it extremely difficult to rescue and recover immigrant slaves who don't trust law enforcers because the police in their native towns do nothing to prevent the trade.

Have you had an interesting offer to work abroad lately?

While the U.S. is a popular destination country for foreign trafficking and slavery, U.S. citizens are also trafficked within the U.S. Young women and children who are U.S. citizens may be illegally trafficked into neighboring countries or within the U.S., from state to state. Every situation is different. In addition, traffickers or "coyotes" are not always strangers. Oftentimes victims are conned into being trafficked by someone they know — a relative, a neighbor, or a friend.

Last year, a ring of traffickers forced 50 illegal immigrant young girls to have sex with 300 to 500 men a day just North of San Diego. Given a cushion to lie on, each girl kept track of her 10-minute sessions with an ordinary household egg timer. Each client paid $20 to the pimps. If we do the math, that is $10,000 on a good day for this particular pimp.

Often times, unsuspecting women will answer newspaper advertisements for jobs without knowing that criminals are posing as legitimate businesses — such as:

Typical ad placed by Mexican sex traffickers in Mexican newspapers, as reported in nydailynews.com
If you are between 18 and 24 years old, like to dance, are a size 3 to 7, are pretty, and want to get between $6,000 and $20,000 in six weeks, pay attention. We are offering:

- A round-trip place ticket.
- A work visa to Canada.
- Housing.
- Transportation from hotel to the clubs.
- Advice on the law.
- Contract for six weeks' work.
- Training if you have no experience.