The six of a sixteen part series on human trafficking and Slavery. The author conducted numerous interviews and was granted the use of copyrighted pictures by US Ambassador John R. Miller as well as by two NGO Directors. The plight of human beings at the hands of the slave lords is a deporable situation and this special analysis with the aid of poignant photographs exposes this hidden crime. 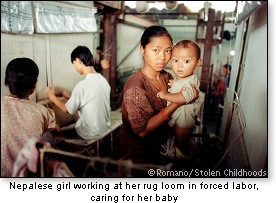 Wars produce slaves used by the triumphant forces, who often sexually abuse women and children taken from ravished war-torn villages. The U.S. State Department reports that adult and child males in defeated villages may be turned into forced laborers or soldiers, even pushed to commit atrocities against their own families and communities. Their communities often reject returning child soldiers.

Child soldiers are a global phenomenon — but the problem is especially critical in Africa, Asia, Middle East, and Eurasia. It's estimated that more than 300,000 children under 18 are exploited today in 30 armed conflicts worldwide, some as young as 7 years of age.

"I feel so bad about the things that I did. It disturbs me so much that I inflicted death on other people. When I go home I must do some traditional rites because I have killed. I must perform these rites and cleanse myself. I still dream about the boy from my village that I killed. I see him in my dreams, and he is talking to me, saying I killed him for nothing, and I am crying." (Source: U.S. State Dept. TIP Report 2005)

Forced labor and involuntary servitude are sadly universal conditions in poor nations, where whole villages work to pay off the debts passed down through the generations. Forced labor may involve foreign workers who end up in conditions of involuntary servitude. Most instances occur as slave lords exploit men, women, and children suffering from poverty, discrimination, corruption, political conflicts, and cultural acceptance of slavery. Peonage labor holds someone against his or her will to pay off a debt.

Slavery on the Cote d'Ivoire cocoa plantations in West Africa has been documented on film for the first time. "Only God knows our pain," one of the cocoa slaves cried. "We left our home for the promise of work and pay. The work is very hard and we are slaves of the cocoa industry."

Peggy Callahan of FreeTheSlaves.net and film producer of "The Silent Revolution" told this writer how the young men are trafficked 300 miles from home to the Cote d'Ivoire plantations with no money so they cannot get away.

"Ninety percent of the plantations have slaves, meaning two-fifths of the world's cocoa is from slavery. They are not paid. Some victims wear dog collars and are referred to as "the creature" or "my slave." They work dawn until darkness, isolated from the world. They are unrecognizable when found. Locked in sheds at night, they urinate in buckets. If they try to run, they are beaten until broken. It is called the "breaking in period." After six months, they become resigned to their torture. If they are rescued, their psychological damage takes months or years to heal. If they break some minor discipline, their clothes are removed, they are thrown on the floor, hands tied, beaten with whips until their body is raw and covered by their tears. Some can never walk again. Flies infest the wounds. If they cannot walk, the slave masters then throw the person away. Ironically, the victims have never tasted chocolate. They tell the world, when they eat something they are supposed to make [with cocoa], they are eating our flesh."

Dr. Kevin Bales points out that in 2001, every chocolate producer in North America and Europe signed the "Cocoa Protocol," which calls for their companies to aid in research to help end abusive cocoa labor practices. The Protocol also states that although they are responsible for funding this research, the chocolate companies shall have no control over this research or the result. (Source: The recent exposé documentary "The Silent Revolution" produced by Peggy Callahan for FreeTheSlaves.net)

Cote d'Ivoire (the Ivory Coast) is the world's largest producer of cocoa. With "grindings" the standard barometer of use, the Netherlands is the top user of cocoa, grinding nearly 300,000 metric tons yearly. The United States is the third top user with grindings of about 250,000 metric tons. 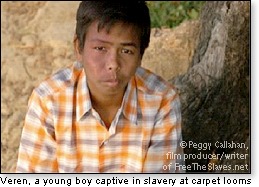 One form of forced labor is the use of "bonded labor" or "debt bondage." In "debt bondage" slavery, there is the phenomenon of the "peshgi system" or "inheritable bondage" which exists in mainly South Asia, particularly Pakistan and India. This is the most common form of slavery in the world. Enslavement starts with the parent's need for money and the indenturing of their child to a brick kiln owner or a rug loom owner for a set rupee amount which could be as little as U.S. $15 per child. The slave is put into labor until his or her family's loan is paid off, an impossible debt that continues to grow as wages fail to meet the laborers "expenses."

Working dawn to dusk, seven days a week, the laborer grows weary until ill health forces their expulsion. The slave is thrown out and dropped off into the streets with no money or transportation. Slaves are kept only until they are able to work at maximum levels that may be only a couple of months up to 15 years. The debt of the slave can be passed down to subsequent generations, enslaving future offspring. Burma, North Korea, Sudan, and Cuba remain on a watch list due to their lack of efforts to eliminate forced labor in their nations.

Yelena is a 25-year old Belarusian with a college degree. She responded to a Minsk employment agency's advertisement seeking nightclub dancers in Cyprus. The agency provided Yelena with a work visa, a three-month employment contract, and a written guarantee that the job would not require any sexual activities. Immediately upon arrival in Cyprus, the owners of the nightclub where she was to work confiscated her passport and told her she would be forced to work as a prostitute at the club. They also told Yelena that she would have to repay a "debt" to cover her travel and visa expenses. Over the next three months, she was forced to work in the Cypriot sex industry, suffering physical and psychological abuse. The club owners confiscated her earnings as "debt" payments. Once the owners recovered their expenses, they released Yelena with nothing. (Source: U.S. Dept of State TIP Report 2004)