The seventh of a sixteen part series on human trafficking and Slavery. The author conducted numerous interviews and was granted the use of copyrighted pictures by US Ambassador John R. Miller as well as by two NGO Directors. The plight of human beings at the hands of the slave lords is a deporable situation and this special analysis with the aid of poignant photographs exposes this hidden crime.

Involuntary servitude: This sordid form of servitude is experienced mainly by migrant low-skilled laborers trafficked into prosperous areas from poverty-stricken communities under the guise of paid labor. Victims find shortly after arrival that they cannot escape their working conditions without beatings and the threat of deportation or imprisonment. Experiencing physical and emotional abuse, they perceive themselves to be slaves or captives, as they often are. 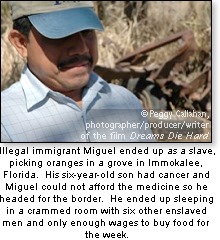 "When I came into the U.S., it was nothing that I earned, it was a false dream and in the end I was here working and I was a slave. We hadn't eaten for three days so we were [stutters] hunger of three days and we just came here like that. Then the coyote says, 'If any of you a--holes try to leave without paying back your ride, that is when I am gonna really f--- you up.' There were 40 guys on payroll for the owner, the Ramos Family, and they were there to watch us work. One day I overheard the boss talk about a worker who ran away. 'Oh, we're gonna get that m----- f-----. We're gonna get him, we're gonna grab him and we're gonna throw him into the pond with the alligators and kill him.' We saw the guy they beat up and he was bleeding from his lip from a huge gash on his forehead all the way down his face to his lip. I couldn't take any of this slavery anymore. This is where I was mad. We called for help. We had a plan."

One day, the slaves from the orange grove began to run to a car on the side of the road belonging to Lucas, an opponent of involuntary servitude. Miguel said it was because of Lucas' coalition that they were rescued and saved. The three Ramoses were sentenced to a total of 32 years in prison. The big companies they contracted for were never investigated. Miguel is legally working in a U.S. warehouse now, and sending money to pay for his son's medicine. Lucas continues to organize fellow workers at the "Coalition of Immokalee Workers" to fight slavery in Florida. 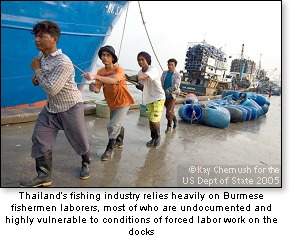 Contract slavery: This is the most rapidly growing form of slavery, the second-largest today. Dr. Kevin Bales of FreeTheSlaves.net explained: "Contracts are offered that guarantee employment perhaps in a workshop or factory, but when the workers are taken to their place of work, they find themselves enslaved. The contract is used as an enticement to trick an individual into slavery as well as a way of making the slavery look legitimate, but the reality is that the "contract worker" is really a slave, threatened by violence, lacking any freedom of movement, and paid nothing." Contract slavery is most often found in Southeast Asia, Brazil, some Arab States, and Indian subcontinent nations such as Thailand.

Rajila, age 30, left her home in India to work in Saudi Arabia, based on promises of a good salary and free housing from a company that supplies laborers for hospitals. However, what seemed like a dream opportunity turned out to be a nightmare. Rajila, together with other foreign women, was forced to work 12-hour shifts, six days a week. She was never paid. The "free" housing was excruciatingly confining, and, when the women returned from work, they were locked in their rooms. Once a week they were escorted to the local market to purchase groceries and other necessities. She and other Muslim laborers from India were not allowed to practice their faith in local mosques. Rajila left Saudi Arabia, taking with her no accumulated salary from three and a half years of uninterrupted work. (Source: Human Rights Watch Report: "Bad Dreams: Exploitation and Abuse of Migrant Workers in Saudi Arabia" July 2004)