The thirteenth of a sixteen part series on human trafficking and Slavery. The author conducted numerous interviews and was granted the use of copyrighted pictures by US Ambassador John R. Miller as well as by two NGO Directors. The plight of human beings at the hands of the slave lords is a deporable situation and this special analysis with the aid of poignant photographs exposes this hidden crime.

Under U.S. Federal human trafficking laws, trafficking victims are treated as refugees, rather than illegal immigrants to be deported. Because federal officials cannot police the enormous immigration and trafficking issues alone, they have urged the individual states to participate as well. Nine States have passed anti-trafficking laws. 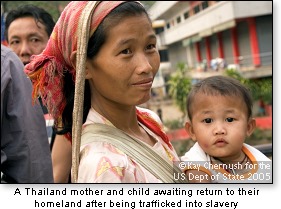 In 2004, the U.S. Department of Justice awarded $13.1 million to U.S. municipalities to fight trafficking, as well as provide food, clothing, and shelter to win slave victims' trust and cooperation in prosecuting organized crime leaders. It is not surprising that in this same year, most U.S. trafficking victims were found in the States of Texas, Arizona, California, Illinois, and New York.

President George W. Bush, an outspoken advocate of ending this human misery, said before the U.N. General Assembly in September 2003:

"There is a special evil in the abuse and exploitation of the most innocent and vulnerable. We must show new energy in fighting back an old evil. Nearly two centuries after the abolition of the transatlantic slave trade, and more than a century after slavery was officially ended in its last strongholds, the trade in human beings for any purpose must not be allowed to thrive in our time." 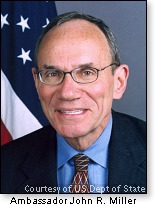 In an interview with this journalist, Ambassador John R. Miller recently explained: "The exposure of human trafficking and slavery started with the media's coverage of the issue. This is good. This media exposure leads to other good things such as people starting to talk to each other about it, talking about it in their churches, starting to talk about it to their state officials, their local police officers, their congressional representatives, and this communication is now happening in many countries in the world. Any news media on this subject I welcome."

The U.S. government made human trafficking a Federal crime by adopting "The 2000 Trafficking Victims Protection Act" [TVPA 2000], a major step forward in acknowledging the trafficking crisis in the U.S. and implementing laws to combat it. Before 2000, no comprehensive Federal law existed to protect victims and prosecute traffickers. Efforts to recognize and combat this appalling activity were in its infancy. TVPA 2000 prosecutes trafficking criminals, who may be subject to 30 years to life in prison. Since 2001, the Justice Department has prosecuted and convicted 277 traffickers, a threefold increase over the previous four years. In addition, TVPA 2000 has provisions to help victims, specifies penalties for criminal activity, provides assistance to those countries that are working to combat trafficking, and institutes sanctions for those countries that refuse to cooperate in protecting men, women, and children from trafficking.

The "2003 Trafficking Victims Protection Reauthorization Act" [TVPA 2003] reauthorized the TVPA 2000 and mandates additional efforts to combat trafficking in persons. Recently, Congress passed the TVPRA of 2005, which was signed into law by President Bush, reauthorizing TVPA 2000. TVPRA 2005 strengthens and expands TVPA 2000, which would approve appropriations for fiscal years 2006 and 2007 for $361 million to combat trafficking worldwide.

Under Secretary Condoleezza Rice's authority, the U.S. Department of State issues a annual Congressionally-mandated "Trafficking in Persons Report" [TIP] that assesses foreign government actions to combat trafficking, including protecting the victims of labor servitude and punishing their exploiters. For viewing the TIP 2005, a document that identifies the underworld of prostitution and forced labor — along with kidnapping, abduction and unbelievable cruelty that is integral to this heinous crime — go to: http://www.state.gov/g/tip/rls/tiprpt/2005/ 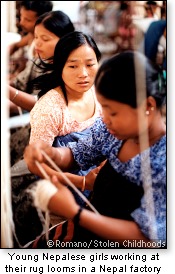 Congress has designed a most effective system to combat global trafficking and human slavery. With important help from non-government organizations and faith-based communities, countries are divided into three tiers within this U.S. reporting system. Tier 1 means that a country fully meets the requirements of the TVPA. Tier 2 countries do not meet the standards fully, but are working to improve. (Tier 2 just added in 2003 a "watch list" of countries that are at risk of backsliding and could face sanctions.) Tier 3 countries face possible restrictions or sanctions in American aid or other measures if they do not take significant anti-slavery action immediately.

The TIP 2005 includes an increased number of countries on Tier 3 for labor violations. However, of the 46 countries on the TIP 2004 Tier 2 watch list, 31 of them improved their rating in the TIP 2005. As of January, 2006, eight countries remain in Tier 3 level. Five of these countries are with sanctions, due to noncompliance with TVPA 2000: Burma, Cambodia, Cuba, the Democratic People's Republic of Korea [a/k/a DPRK], and Venezuela; Kuwait, Ecuador, Saudi Arabia are without sanctions.

Ambassador John R. Miller, in a recent interview with this journalist, stated:

"Due to the active engagement of my office in coordination with various Embassy officials, several countries who risked non-humanitarian, non-trade related sanctions on Tier 3 of the Trafficking in Persons Report were reassessed to Tier 2 Watch List in September (Bolivia, Jamaica, Qatar, Sudan, Togo, and the United Arab Emirates). For example: Bolivian law enforcement initiated 22 trafficking-related cases and has made six arrests. In April 2005, The City of La Paz established a 24-hour emergency and shelter and toll-free hotline that received 900 requests for assistance in its first 4 months.

The government of Qatar inaugurated a human rights department within its Interior ministry. This department seeks to provide information services to trafficking victims, particularly victims of forced labor and domestic servitude." 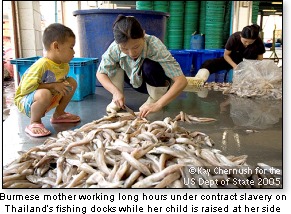 The U.S. Department of Health and Human Services [HHS] has launched the "Rescue and Restore Victims of Human Trafficking" campaign to help identify and assist victims of human trafficking in the United States. HHS has focused on the help of faith-based organizations, health care providers, social service organizations, law enforcement agencies, and the citizens of the United States. The campaign is educating these groups about human trafficking, enabling them to screen for trafficking victims, and equipping them with tools to help trafficking victims access benefits and services.

HHS is forming "partnerships" or coalitions with more than 820 national state groups to date. The HHS has a hotline for victims, or concerned citizens, to tip officials to sex trafficking. That number is 1-888-373-7888. For more information, go to their website: www.acf.hhs.gov/trafficking

Interestingly, the second largest trafficking and slavery ring ever prosecuted in America was recently busted on posh Long Island, NY. Sixty-nine Peruvian men, women, and children were lured by three Peruvian compatriots (husband, wife, and daughter crime ring) with promises of America's riches. They were trafficked to Long Island, a major immigrant gateway, to work 16 hours a day in a factory. A typical case of forced labor, the Peruvians were told they each owed traffickers $12,500 in smuggling fees. Unable to pay down their debt while earning little or no money, they existed for four years in subhuman conditions inside three small houses with no outside contact allowed. While the victims have been rescued and are free, they remain terrified of their traffickers' retaliation.

The first of the three traffickers, the wife, was successfully prosecuted, sentenced to 15 years imprisonment. Catholic Charities provided the victims with comfortable housing (25 persons were housed at the local Catholic seminary), medical attention, counseling, and legal status application.

Ambassador John Miller said a case bigger than this one was in 2001, in American Samoa, where at least 200 Vietnamese and Chinese women were freed from a garment factory slave house.


A condensed version was published in the February and April 2006 issue of Catholic World Report.