The twelth of a sixteen part series on human trafficking and Slavery. The author conducted numerous interviews and was granted the use of copyrighted pictures by US Ambassador John R. Miller as well as by two NGO Directors. The plight of human beings at the hands of the slave lords is a deporable situation and this special analysis with the aid of poignant photographs exposes this hidden crime.

For the most part, criminal traffickers and slave lords are not recognizable thugs, but are usually known as "respectable" businessmen within their communities. Due to the clandestine nature of human trafficking and modern-day slavery, it is most difficult to identify and bring closure to a concealed trafficking ring. In many countries, law enforcement agencies are corrupt and actually enable trafficking and slavery to operate and flourish. Because of fear for their lives and fear against corrupt police, victims are themselves unable to escape from their involuntary servitude without outside expert help. Here in the U.S., and other developed countries, law enforcement is most times of the highest order and trust, and it is in these countries where victims can be helped the most via "smart raids." 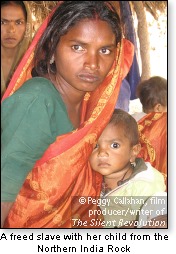 No matter how well-planned a law enforcement operation or "smart raid" is prepared, the children and adults in captivity are taught by their slave lords to fear everyone, so they naturally run from well-meaning rescuers during a raid. In many rescues, the victims face frightening choices after being freed. If they are rescued and deported back to their home country, they and their families face retribution, even death, from the local traffickers. On the other hand, if the victims are not deported after a well-planned raid and rescue, and are allowed to stay in their work country, they fear of retribution from the ringleaders there. Government officials are becoming well aware of how important treatment, rehabilitation, and education are for victims who are rescued. First, however, law enforcement agencies, originally unsympathetic to undocumented immigrants, must now win the confidence of rescued victims so they will readily cooperate and identify their criminal traffickers for speedy prosecution and imprisonment. 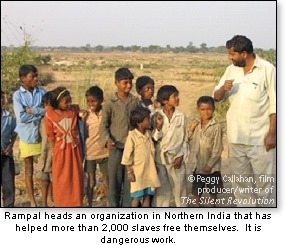 Rampal teaches: "There should not be two categories of people in the world, one a slave and one a free person. The very idea that there is a human being on this planet who is unable to breathe fresh air — free air — the very idea revolts me. I have faced pressures and threats to kill me, threats to beat me up. But, you know, if we have taken up voluntarily the responsibility of bringing about [positive change], then the danger is something we have to accept as part of life and that is it." 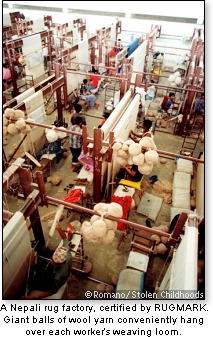 A well-planned raid involves using warrants or other court or police orders and is most effective when there is a high degree of information gathered by the government, non-government organizations, or ordinary citizens on a particular human slave or trafficking operation. "Smart raids" can ensure the safety of all victims and law enforcement personnel involved.

Certain raids are conducted in a "blind" way. These are the most dangerous kind and are not always successful in rescuing victims from their workhouses. However, in some areas, especially in underdeveloped countries, these "blind raids" are the only kind that can be conducted, due to the corruption of law enforcement in the area. Non-government organizations often help law enforcement officers carry out raids and rescues.

Take for example one exemplary global nonprofit organization, an NGO called RUGMARK International [www.Rugmark.org], which is working to end illegal child labor in the carpet industry in India, Nepal, and Pakistan. RUGMARK does this through loom and factory monitoring by corps of independent inspectors, and by consumer labeling of the "RUGMARK" label, assuring that any carpet sold with this label is free of illegal child labor. RUGMARK also fights child slavery by building and operating schools for former child slaves, as well as children of freed adults. RUGMARK carpets are widely sold in Europe and North America. Of its year 2004 total retail sales of RUGMARK rugs, $57,000 was directed to educate children in South Asia.

RUGMARK has a licensing program where rug companies can sign up with RUGMARK to get the certification on their rug, agreeing to random surprise inspections in all of their production sites. During those inspections, which occur regularly but unexpectedly, slave children are sometimes identified and rescued. There are other non-government organizations that do similar work, but in more of a "raid" scenario where the employer is not compliant and not willing to provide open access. In that case, these organizations have to conduct secret raids to rescue the slaves. 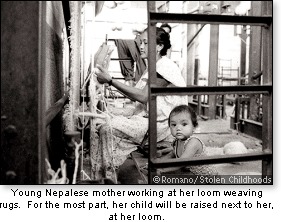 There is an excellent DVD available featuring the founder of RUGMARK, Mr. Kailash Satyarthi. Kailash is a long time anti-child labor advocate, having freed and rehabilitated over 3,000 children. The film "The New Heroes," narrated by actor Robert Redford, has an astonishing 20-minute segment capturing one of the daring secret raids Kailash conducted at a stone quarry in India that involved both adult and children slaves. Kailash Satyarthi stated: 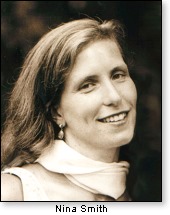 In an interview with this journalist, Nina Smith, Executive Director of RUGMARK Foundation USA, describes the problem of selling handmade wool rugs that are made with child labor:

"One of the things in this country [USA] that is driving the problem of child slavery in Southeast Asia is the increasing demand for cheap goods and the consumer attitude for a disposable lifestyle — the economics of the situation. There are people working on the policy level, the enforcement level, and on the grassroots level in the field doing rescue operations. There is a whole range of groups working on the slavery problem. RUGMARK'S specific niche is to create a demand in the U.S. and Europe for child-labor-free goods. Then very simply, manufacturers are not going to produce them. In the case of children slaves, if there are not schools available to them, then the only alternative is for children to go to work."

Laxmi's story of child labor in Kathmandu
In 1997, RUGMARK inspectors found 6-year old Laxmi Shrestha working in a Nepali carpet factory. She told her rescuers she had to work to survive. Her family had migrated from their village to Kathmandu after a landslide wiped out their home. Her mother, who usually worked the looms, was ill. Her father, a laborer who squandered his minor earnings on drink, was seldom home. When he was, he beat his wife and children. Illiterate at the time of her rescue, Laxmi was nonetheless an eager student. With aid from RUGMARK, Laxmi quickly progressed, and by the time Robin Romano took this photo in 2000, she was in the fourth grade. Today, at 14, Laxmi is one of the top students in her ninth-grade class. She hopes to become a social worker and help other children escape desperate labor situations. [Source: RUGMARK Foundation]