The ninth of a sixteen part series on human trafficking and Slavery. The author conducted numerous interviews and was granted the use of copyrighted pictures by US Ambassador John R. Miller as well as by two NGO Directors. The plight of human beings at the hands of the slave lords is a deporable situation and this special analysis with the aid of poignant photographs exposes this hidden crime.

Trafficking of humans for slavery is a trans-national criminal enterprise that typically is found in regions plagued by poverty, instability of government, and corruption of law enforcement. Crime lords and gangs lure vulnerable men, women, and children with promises of work and education to other lands, only to funnel huge profits into the coffers of organized criminals.

Of course, not all slaves are trafficked, and not all smuggled persons end up as slaves. Let us discuss the difference between the two. 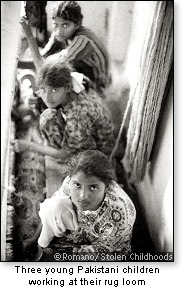 Difference between smuggling and trafficking of humans

Human smuggling is the facilitation, transportation, or illegal entry of a person across an international border, in violation of one or more countries' laws, either clandestinely or through deception, such as the use of fraudulent documents. Human smuggling is generally done with the consent of the person being smuggled who often pays large sums of money. Once inside the country of their final destination, smuggled persons will generally be left to their own devices. The vast majority of people who are assisted in illegally entering the United States are smuggled, rather than trafficked. However, a person being smuggled may then become a victim of human trafficking as the person is defrauded along the way and forced into labor he or she cannot control.

Trafficking in persons (TIP) can be compared to a modern-day form of slavery. It involves the illegal trade and exploitation of people forced into labor through coercion, fraud, sale, threat, or deception, and includes human rights abuses such as debt bondage, deprivation of liberty, and lack of control over freedom. Trafficking need not involve the actual movement of the victim, and there is no requirement that the victims must cross an international border.

Case history — Was Sonia smuggled or trafficked?
Sonia was invited to come to the United States by friends of her family. She was told that she could work for them as a housekeeper, and they would pay her $100.00 a week. Sonia was provided with fraudulent documents and departed for the United States with her new employer. She knew that this was illegal, but she needed the money, and was willing to take the risk.

Was Sonia smuggled or trafficked? Answer: Sonia was smuggled into the United States. She left willingly with full knowledge that she was entering the United States illegally. Upon arriving in the United States, Sonia was kept in isolation, was given a place to sleep in a basement, and told not to speak to anyone or she would be turned over to the Immigration Service. Sonia was never paid for her work and felt that she had no one to turn to for help. (Source: U.S. Dept. of State TIP Report 2005)

Many times, law enforcement officials find it difficult to ascertain whether someone has been smuggled willingly into a country or if they were trafficked by force. However, if both forms of entry result in forced labor of any kind, the differences then cease and the labor is illegal. If a person is under 18 and induced to perform commercial sex acts, it is then always considered trafficking.
Case history — Were the girls smuggled or trafficked?
A husband and wife in the United States convince their relatives in India to allow their daughters to travel to the United States to receive an education. The husband and wife are the aunt and uncle to the girls, and have promised the girls' parents that they would provide housing and support for the girls. In order for the girls to receive a student visa, their aunt and uncle enroll the girls in school in the U.S. The girls are granted student visas and allowed to enter the U.S. to receive an education.

Once the girls arrive in the U.S., their aunt and uncle immediately tell them that they will not be attending school. The aunt and uncle never intended to have the girls attend school and only enrolled them for the purpose of fraudulently obtaining the entry visas. At this point, the girls have unwittingly been smuggled into the U.S. using visa fraud.

During the next several weeks, the girls are locked in a basement and continually told that if they try to leave, they would be arrested for their involvement in the visa fraud. Eventually, their uncle takes the girls to local motels where they are made to clean rooms and provide janitorial services. The girls are never paid for their work, all their identification has been taken away, and they are continually reminded that they could be arrested for their involvement in visa fraud. Because the girls are being held against their will through coercion and intimidation and are being forced to work for no pay, they are now victims of trafficking. (Source: U.S. Dept. of State TIP Report 2005)


A condensed version was published in the February and April 2006 issue of Catholic World Report.