The fourth of a sixteen part series on human trafficking and Slavery. The author conducted numerous interviews and was granted the use of copyrighted pictures by US Ambassador John R. Miller as well as by two NGO Directors. The plight of human beings at the hands of the slave lords is a deporable situation and this special analysis with the aid of poignant photographs exposes this hidden crime.

These sexual offenders come from all different cultures and socio-economic levels, many holding positions of government and religious leadership, faithfulness, and trust. The U.S. Department of State reported previous cases of CST involving U.S. citizens that included a pediatrician, a retired Army sergeant, a dentist, and a university professor. Many times, the sex tourists travel with illegal drugs purposely to control the minor's will or to bait and solicit sex with the minor. 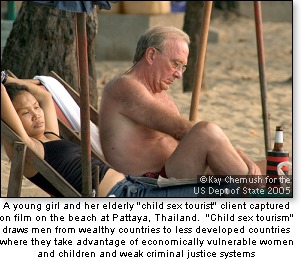 The Vatican has recently warned in a new Document, 'Pastoral Care For The Liberation of Women of the Street' [street prostitutes], that men who are clients of prostitution have deep-seated problems as they, too, are enslaved in sex and domination. The document reveals that the largest numbers of men are over 40 years of age, but there are an increasing number of younger men, between 16-24, involved as well. The Vatican reported that 500,000 women from Eastern Europe are enslaved into prostitution on the streets of Western Europe, alone.

Pope Benedict XVI warned the Bishops of Sri Lanka in May 2005: "No effort must be spared to encourage civil authorities and the international community to fight child abuse and assure young people the necessary legal protection."

Siri's story of child sex tourism
"Thailand has always had slavery but never before on this scale and never before as the new slavery," said Dr. Kevin Bales to this journalist. Dr. Bales describes one young sex slave, Siri, whom he met and interviewed at a brothel in Ubon Ratchitani, northeastern Thailand:

"When Siri wakes, it is about noon. In the instant of waking, she knows exactly who and what she has become. The soreness in her genitals reminds her of the fifteen men she had sex with the night before. Siri is fifteen years old. Sold by her parents a year ago to a woman broker from a Northern village, the broker assured her parents they would be well paid for their daughter. After some negotiation, they received 50,000 baht [$2,000] for Siri. This exchange began the process of debt bondage that is used to enslave the girl. The daughter's labor must pay back the loaned money before she is free to leave the brothel. However, her debt has escalated in a short time to 200,000 baht for her rent, food, drinks, medicine, and fines if she did not work hard enough.

"Siri's resistance and desire to escape the brothel are breaking down, and acceptance and resignation are taking their place. After she was sold and taken to the brothel, she discovered that the work was not what she thought it would be. Siri had a sheltered childhood and was ignorant of what it meant to work in a brothel. Her first client hurt her and at the earliest opportunity, she ran away. On the street with no money, she was quickly caught, dragged back, beaten, and raped. That night she was forced to take on a chain of clients until the early morning. The beatings and work continued night after night until her will was broken. Now she is sure that she is a bad person. Girls in Thailand, like Siri, are sold into sex slavery by the thousands. Money, culture, and society blend in new and powerful ways to enslave girls like Siri."

(Source: "Disposable People-New Slavery in the Global Economy," by Dr. Kevin Bales, University of California Press, 1999.)
A condensed version was published in the February and April 2006 issue of Catholic World Report.