The second of a sixteen part series on human trafficking and Slavery. The author conducted numerous interviews and was granted the use of copyrighted pictures by US Ambassador John R. Miller as well as by two NGO Directors. The plight of human beings at the hands of the slave lords is a deporable situation and this special analysis with the aid of poignant photographs exposes this hidden crime.

"Neither slavery nor involuntary servitude, except as punishment for crime whereof the party shall have been duly convicted, shall exist within the United States, or any place subject to their jurisdiction." -13th Amendment to the Constitution that freed all slaves on December 6, 1865

Many believe slavery ended here in our nation with the ratification of the Thirteenth Amendment of the United States. Not only is this not true, but at a minimum guesstimate, there are 17,500 new people trafficked into the U.S. each year, not counting those Americans already here who are forced into slavery. The estimated length of time a slave remains in servitude is from 3 to 15 years. If we multiply the yearly rate of 17,500 by an average of six years, that is a lot of slaves at one time within our U.S. boarders. The 2005 United States Department of State Trafficking in Persons Report [TIP] quotes Secretary of State Colin Powell and the Central Intelligence Agency [CIA] estimate: "50,000 people are trafficked into or transited through the United States annually as sex slaves, domestic servants, garment slaves and agricultural laborers." Because of the clandestine manner in which the traffickers move people, it is nearly impossible to derive a concrete number of victims. 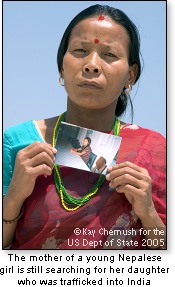 When people become "enslaved commodities" that are sold repeatedly and then trafficked to different regions or nations numerous times, the numbers of victims are hard to estimate. Most victims are kidnapped from their poor families whom they will never see again or sold by their desperate parents for a small sum to help feed the other family members.

Working 18 hours a day, the victims are locked away, sometimes shackled at night, so they cannot run away. The disposable, reusable, expendable people are uncared for, and beaten for the slightest disobediences. If they attempt escape, their punishment is life threatening. When they can no longer produce their quota of labor, they are simply thrown away, discarded.

Four centuries ago, the United States experienced a slave trade of approximately 13 million Africans sold by African warlords at great gain to New World profiteers. Today, illegal modern slavery finds more slaves than ever before (27 million)-all locked away, paid little or no money, and controlled by violence.

Modern slavery most often finds its beginnings at slave sale houses in underdeveloped countries. After being sold for as little as $20 each, the men, women, and children are transported in overcrowded ships, airplanes, trucks, or wagons to their labor camps or brothels. Those who survive the grueling transport will work as prostitutes in pimp-controlled brothels, as agricultural laborers in the fields, as factory sweatshop labor under the cruelest conditions, or as domestic help in the wealthiest households. 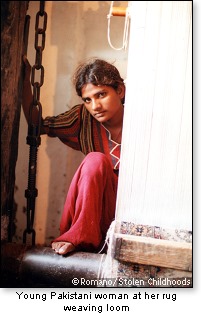 By creating a cycle of poverty and dependence, the slaveholders keep the uneducated and untrained slaves dependent in their debt bondage. Unable to obtain a wage-earning job when freed and discarded, the desperate victims in turn often sell their own children into bonded labor for a tiny profit.

Slave lords are only ones getting rich

Human slavery not only flourishes on every continent, with the exception of the Antarctica, but also in every nation. The U.S. 2005 TIP Report lists 150 countries found to be a source destination or transit country for trafficking of slaves.

Dr. Kevin Bales of the Washington, D.C.-based organization Free the Slaves explained in an exclusive interview with this journalist why the value of slave labor in the world economy is so important and why boycotts will not work: 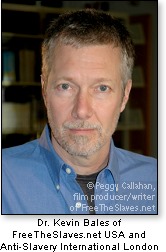 "The total value of slave-produced goods and services is estimated at over $15 billion dollars per year. In terms of the global economy, this is a drop in the ocean, but it points to the very difficult problem of how we can stop participating in slavery through the things we buy, or profiting from slavery in the things we sell. The problem is difficult because no commodity or product is made primarily with slave labor. Cotton, cocoa, sugar, coffee, steel, and a host of other products, have slave input, but only in a small fraction of the total produced worldwide. Few commodities have more that two or three percent of their total output tainted with slavery. It is almost impossible to separate the shirt made with slave-produced cotton from the shirt made with free cotton, and, in fact, any shirt may simply have a few threads of slave cotton mixed in with the rest.

For this reason, boycotts, which seem an instinctive reaction, really will not work. Large-scale boycotts will heavily penalize the 98% of farmers not using slave labor more than those that do. Remember that the slave using farmer or producer is selling their goods at the market rate, getting the same as their honest neighbor, but making more profit because they use slaves. The retailer in our local mall may be a ten or fifteen step along the product chain from the farmer. The profit from slavery was taken out by the slaveholder at the beginning of the chain, who will not be penalized by a boycott at the far other end of the chain. The most effective response is to attack the slavery where it exists-at the farm, or mine, or workshop where slaves are exploited. A person may choose not to buy a shirt, but let it be so that the money saved can be sent to support groups that are stopping slavery at its source, not to punish shops that are simply the next to last link in the product chain before we take the goods home."

Nina Smith, Executive Director of RUGMARK Foundation USA, supports Dr. Bales's statement when she recently spoke to this journalist: "The purpose of Rugmark is to prevent product boycotting. Certification (i.e. identifiably child labor-free goods) is a way for consumers to still buy a product with peace of mind and a way for manufacturers committed to childfree production to identify their production integrity in the marketplace. I agree with Kevin that boycotts do not necessarily help. But the work of Rugmark does-it uses the market place to create lasting change." 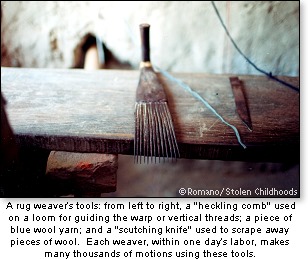 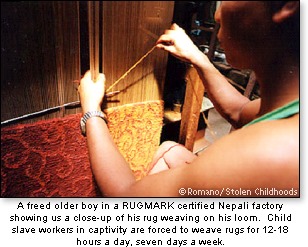